News Analysis
Tweet
Share
Healthwatch Essex, part of the Government-funded national Healthwatch network of community representatives, came up with the idea of using a child to front a new film (below) that explains STPs in simple terms.

She is "the next big thing in broadcasting", "doesn’t pull any punches" and "won’t take no for an answer", according to Healthwatch Essex.

The organisation, which represents the views of local people, adds: "If you can explain Sustainability and Transformation Plans (STPs) to a 10-year-old, you can explain it to anyone. That's the thinking behind our latest film."

It is already the most-watched video that Healthwatch Essex has ever produced, with more than 1,400 views on YouTube since it went online this month.

The youngster complains about the "long, complicated words" often used when talking about health, rolling her eyes and pulling a face.

Dr Tom Nutt, chief executive at Healthwatch Essex, and one of those appearing in the film, tells her the STP is a "big plan".

He explains that it aims "to save money where we can" and "try and improve the way NHS and social care works".

With candid comments from those taking part, the film is the antithesis of interviews often given by individuals who have been heavily media trained.

Harriet asks: "so why can’t you carry on doing things the way you do now?" In response, Nick Hulme, chief executive of Colchester and Ipswich Hospitals, admits: "Because the money has run out." 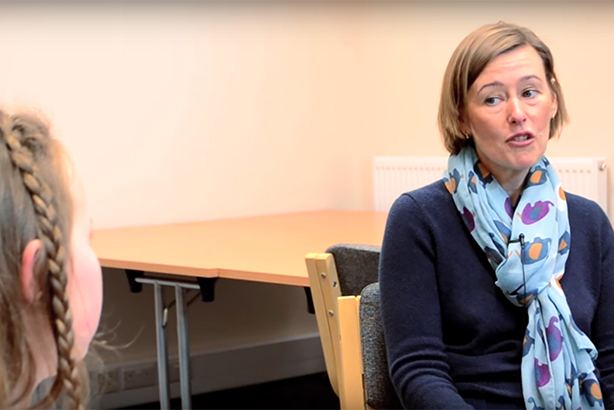 The point is echoed by another person in the film, Sam Hepplewhite, accountable officer at North East Essex Clinical Commissioning Group (pictured above with Harriet).

She says: "We’re spending more money than we have available and that money is not always getting the best results for our population."

Harriet is direct with her questions – demanding to know why Nick Hume has been chosen "to sort it out?"

He laughs and tells her: "That’s a good question, I don’t know really...I think the reason is just because I’d been around the longest."

The film concludes with Harriet saying: "I understand that an STP is a sustainable plan, so a plan that’s probably going to stay for quite a while, to merge the health and social care together and to save money for the NHS."

Read next: So you want my job? Director of comms, NHS providers
Isabel Cockayne, head of communications at the clinical commissioning groups for West Suffolk, Ipswich and East Suffolk, described the film as "a fabulous opportunity" to communicate "an explanation of what is a tricky subject to as broad an audience as possible".

Jan Ingle, head of comms and external relations at Ipswich Hospital NHS Trust, added: "Most of us spend much of our lives making the complex simple. This short film about how a big new plan which brings people and organisations gets to the heart of the matter."

And Claire Tripp, comms officer at North East Essex CCG, said the challenge of explaining STPs to a ten-year-old was "making the language and information simple and jargon-free".

Meanwhile, the film received plaudits online and on social media from other comms professionals in the health sphere.