Recall of business news stories in the first part of January was low. The first three weeks of the month were dominated by recall of stories about retailers. While Next reported poor trading during Christmas and downgraded its profit forecast, M&S reported good fourth quarter growth including the first rise in sales in its troubled clothing division in more than two years. Other retailers including Tesco, Morrisons, Primark, Debenhams, ASOS, Mothercare, JD Sports and Supergroup also reported good trading over the important Christmas period. 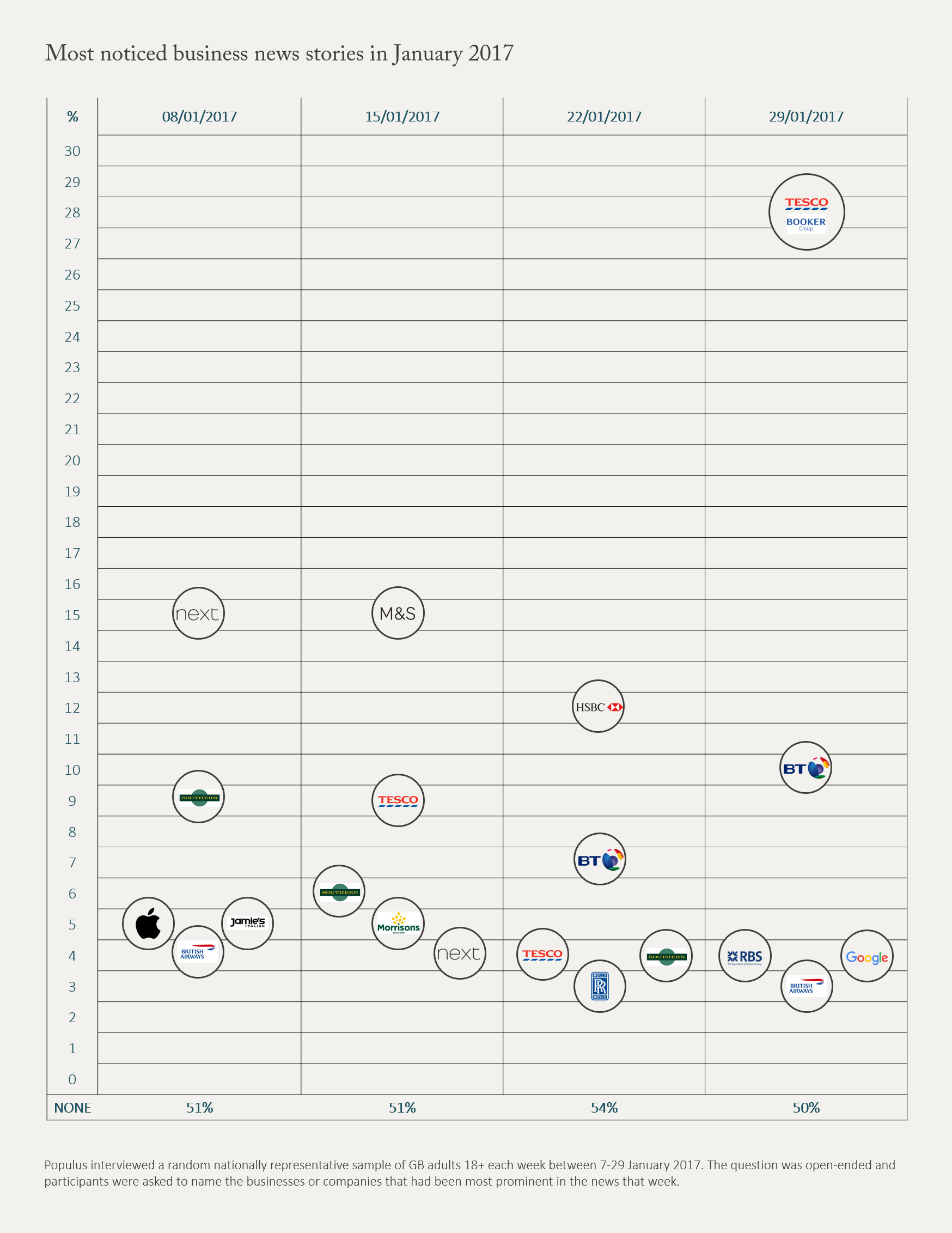 Despite strong Christmas trading few retailers are forecasting profit uplifts for 2017. In most cases this is due to concerns about the fall in the value of the pound and uncertainty over Brexit negotiations. At the heart of these concerns is a sense that rising cost of raw materials, production and transportation will drive up the cost of most consumer products. As around 60 per cent of GDP is driven by consumer spending, this is a real cause for concern.

It is also notable that most Britons failed to register both these concerns and the hint that price rises are on the horizon. To avoid reputational hits when price rises begin to bite in the next few months, retailers need to signpost price hikes much more clearly to consumers. They also need to explain what they are doing to limit increasing costs of production, but how some of the costs of a weaker pound will have to be passed on to the consumer.

Tesco walks a fine line with its acquisition of Booker Group

The most memorable story of the month is Tesco’s surprise £3.7bn takeover of Booker to form the largest food company in the UK. The acquisition took the market off-guard because the two companies do not appear to be direct competitors. Tesco is a retailer and Booker is a food wholesaler supplying thousands of independent convenience stores including Londis and Budgens, as well as 12,000 caterers and 900,000 small businesses and restaurants such as Wagamama, Byron and Carluccio's.

So, what’s the attraction of this deal which Dave Lewis, Tesco CEO, describes as ‘the next wave for Tesco’? This ‘out of sector’ takeover is essentially a reaction to an increasingly difficult environment for supermarkets, in which razor thin margins are being pinched further by competition from discounters and a trend towards more frequent out-of-home eating.

First, Booker opens up Tesco to the £85bn out-of-home market, which is growing faster than the in-home market. Second, it almost doubles its already leading share of the convenience store sector, though most of the additions are franchisees. Lewis says he has no plans to change the franchisee model, but has confirmed that Tesco will use them as click-and-collect sites for its online offer. Lastly, the deal matches rivals’ moves to grab business outside of the low margin grocery sector. For example, the main reason that Sainsbury’s acquired Argos, and Morrisons established a wholesale partnership with Amazon Fresh was to snatch a bigger slice of the toys, electricals and online retail market.

However, the deal is subject to Competitions & Markets Authority (CMA) clearance and could yet be blocked. Someone who knows a thing or two about the retail sector, former CEO of M&S, Lord Rose, thinks that the deal may be in jeopardy. He says that the CMA ‘will be all over this like a rash’, because the deal would give Tesco, already the largest food retailer, more than 27 per cent of the convenience store market.

If the deal does go through, Tesco faces a difficult balancing act. It is only just beginning to repair its relationships with suppliers who for years have characterised the grocer as a cold money-making machine which screws its ‘partners’ with brutally restrictive supplier agreements.

The Booker deal increases Tesco’s buying power significantly and weakens the position of suppliers even further. It also puts Tesco in the delicate position of being both a wholesaler, which supplies and nurtures independent convenience stores, and a retailer which competes with them. To use Dave Lewis’ phrase, ‘the next wave’ to challenge Tesco’s reputation is to avoid the accusation of bullying from ‘partners’ who are diminutive by comparison - a charge that it hasn’t handled well, so far. 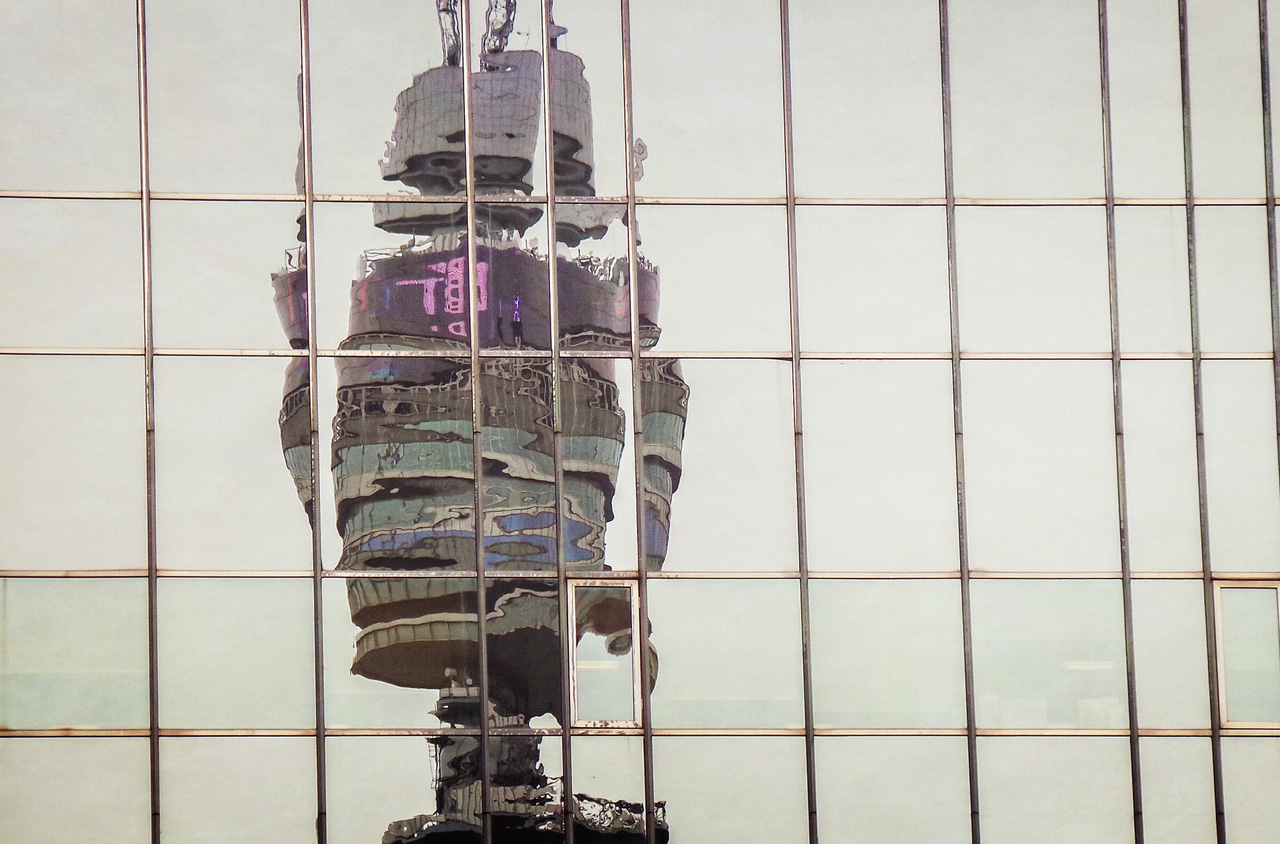 BT’s CEO, Gavin Patterson, already had a big ‘to do list’ to keep the company’s reputation above water. He is fighting a losing battle with the regulator to retain control of his Openreach broadband division. Sky continues to up the ante in sports broadcasting, making it more and more difficult for BT Sport to remain viable. Further, the pension scheme deficit has widened to nearly £10bn, one of the largest in the UK, and threatens to turn off the dividends tap to investors.

So, the last thing Patterson needed was an accounting scandal in BT's Global Services division that wiped 20 per cent off the company's market value (£8bn) in one day.

Patterson says, "I am very angry… The integrity of BT has been challenged… Our reputation is tarnished. I completely acknowledge we’ve undermined trust in us as a management team. We have to rebuild that."
He’s started the right way, with a flash of anger followed by ‘heads on sticks’ – six senior Italian managers have resigned and more look set to face criminal charges. This shows that he cares and that the company is not prepared to protect those responsible for misconduct. He also seems ready to do whatever it takes to solve the problem including selling BT’s entire Global Services division, which was hit by a similar accounting blowout less than a decade ago.

However, there is so much more to do to get BT’s reputation back on track. The next step in recovering reputation is segueing from anger to genuine and humble apology. Before BT can get on with the practicalities of rebuilding its business and its reputation, it needs to win the right to do so by seeking atonement from its investors and customers.

If people don’t believe that you are sorry or that you have learned your lesson, they won’t trust you. That goes for company’s just as much as individuals. Just ask the financial sector how hard it is to rebuild trust when people don’t think that banks have changed nor apologised for what they did to the global economy.