"This can’t go on any more"
If there’s one thing we have learned in 2016, it is that anything can happen; Leicester City can win the English Premier League, the United Kingdom can vote to leave the EU and, against all odds, Donald Trump can become President of the United States of America.

What the latter examples clearly demonstrate is that people are looking for change.

In the UK, the Brexit result has inspired the Government to shape a much firmer approach to keeping businesses in check.

At the Conservative Party conference last October, Prime Minister Theresa May made herself perfectly clear: "If you are a boss who earns a fortune but does not look after your staff… an international company that treats tax laws as an optional extra… a household name that refuses to work with the authorities even to fight terrorism… a director who takes out massive dividends while knowing that the company pension is about to go bust… I’m putting you on warning. This can’t go on any more."

In his article "Why Brexit is a watershed for business" in PRWeek’s September-October 2016 issue, Rick Nye, managing director of Populus’ reputation and strategy team, argued that the PM’s tougher stance should be viewed as more than simply the early good intentions of a new Government.

Rather, May’s "willingness to shake things up" is a direct response to public sentiment. Indeed, according to Populus polling, 74% of the UK population elieves that the government needs to be tougher on business.

It is clear that the Government’s change in approach has significant implications for the way businesses operate. Failure to take May’s warning seriously will lead to Government intervention in business affairs and far stricter regulation.

The question for businesses now is: how should they respond? What can they do to avoid a tangle of red tape and very public inquests into their behaviour?

The answer, of course, is to address the public perceptions that have contributed to the poor reputation of business and triggered the Government’s mood swing.

Public attitudes to business
Business had a tough time of it last year. Various instances of multi-national corporations being accused of failing to pay enough tax, the demise of UK high-street stalwart BHS, high-profile hacking scandals and serious allegations of poor working conditions made against Sports Direct, to name a few, have all caught the attention of the public and shaped its poor view of business.

To assess the extent of this reputation challenge and uncover what companies can do to get on the right side of the public, Populus asked people to tell us what they think about businesses.

We found that, when it comes to how positively people feel about business, size matters. Publicly-listed companies, big businesses and multinational corporations are viewed in the least positive light, with family-owned firms and SMEs performing considerably better (See figure 1). 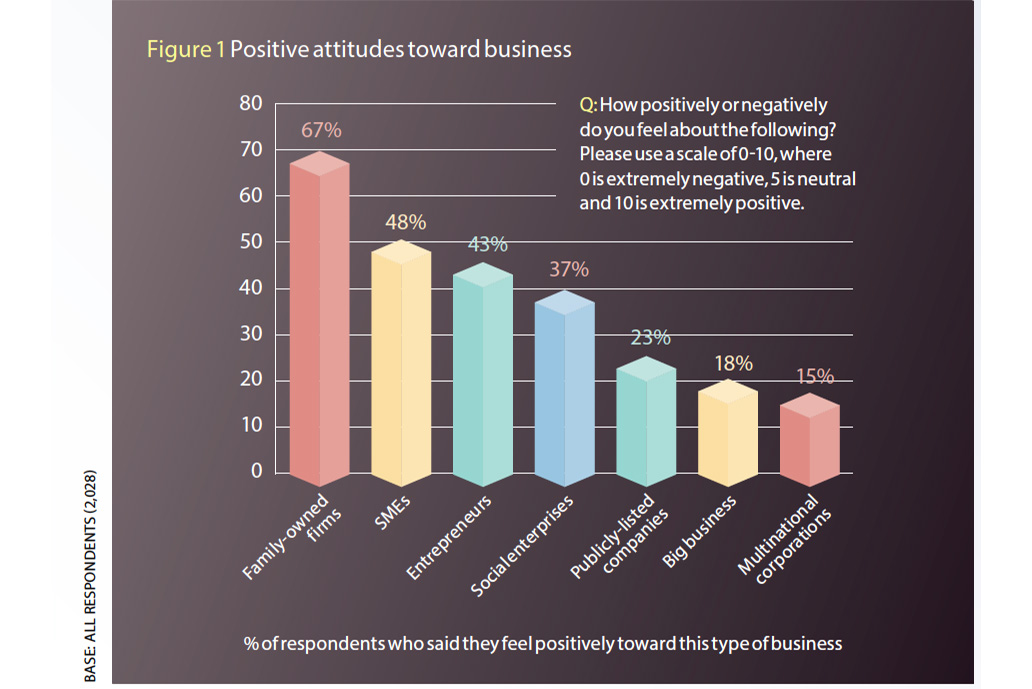 The findings indicate a relationship between the distance of the public from top decision-makers – which will be far greater for big businesses – and levels of positivity toward the company itself.

The current climate certainly calls for the upper echelons of business to connect with the public and take a more hands-on approach to telling their company’s story. After all, it is the public’s attitudes that need to change if businesses
are to avoid intense scrutiny from Government and regulators.

Heroes and villains
Fortunately for some, the public doesn’t tar businesses in every sector with the same brush.

Supermarkets are viewed by far the most favourably (41%), while – not surprisingly – tobacco companies are greeted with the most negative sentiment (See figure 2). 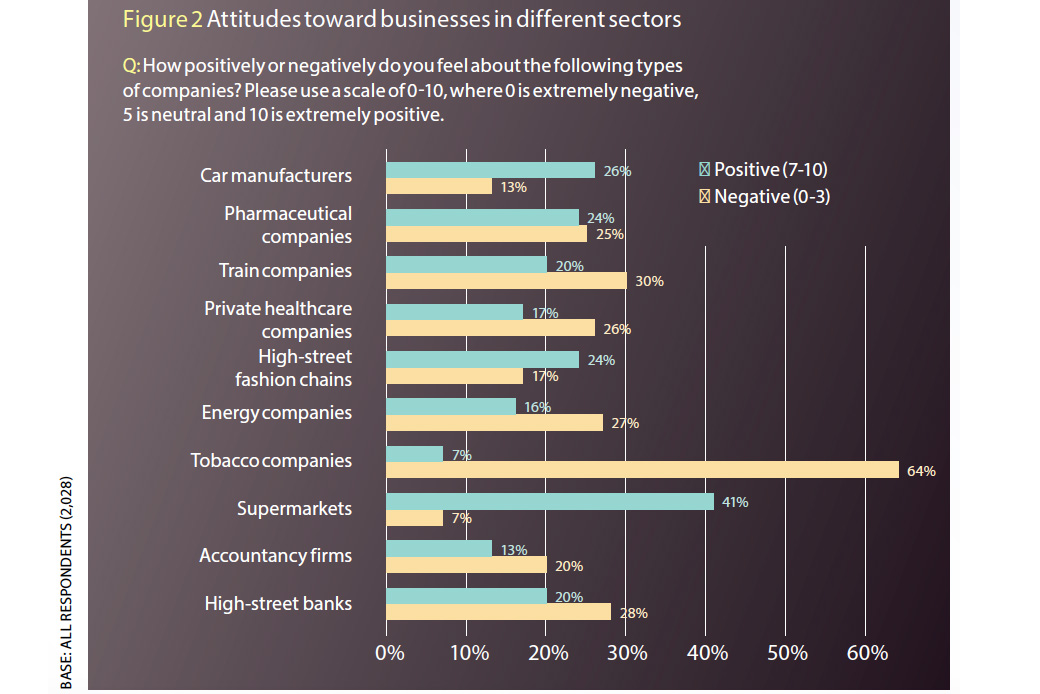 Businesses that consumers choose to actively engage with on a regular basis – for example, supermarkets and high-street fashion chains – tend to have better reputations than businesses in low-engagement categories such as energy suppliers and accountancy firms.

However, the fact that people are less engaged with certain businesses is not an excuse for them to let communications slide. It is imperative that these businesses and their PR teams do their research, uncover exactly what consumers want to know from them and focus on delivering this message as clearly as possible if they are to improve their reputations.

Determining your key messages
Finding out what members of the public feel businesses should be prioritising is one way of identifying the key messages that can shape comms strategies.

We asked respondents to tell us what they think businesses currently prioritise and what they should be prioritising. Not surprisingly, there are considerable disparities between the two (See figure 3). 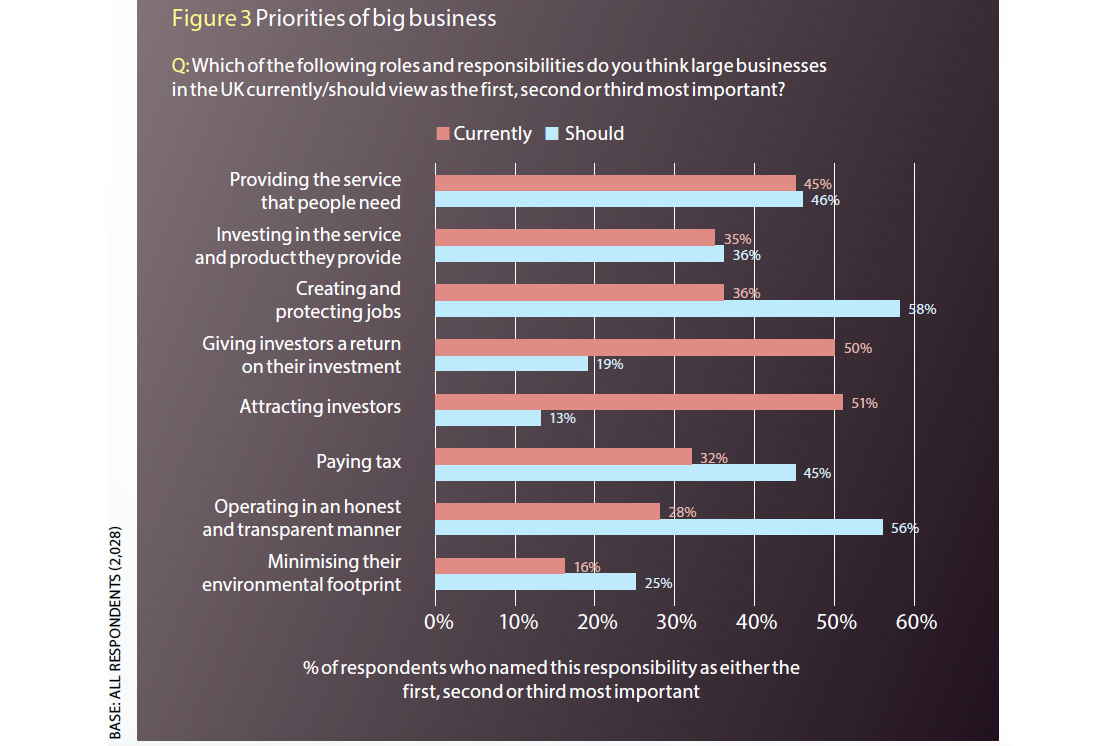 Businesses should therefore be seeking to assert their commitment to providing and protecting jobs, as well as paying the level of tax the public would accept. On the other hand, while we understand that attracting new investors and giving current ones a return on their investment is important, being seen to prioritise this over other areas is a no-no as far as the public is concerned.

Risky business
By exploring the factors that have shaped the public’s negative views, businesses can identify ways to improve their reputations and avoid clashes with the Government, regulatory bodies and/or the media, which have the potential to seriously affect the way they operate.

It will come as no shock that the public would be very much in support of regulatory change. In fact, 72% would back capping bonuses at 50% of annual salary, while 67% would support a ‘maximum wage’, which would mean that no manager could earn more than 10 times the average wage of an employee in their company.

The risks to businesses, and particularly business leaders, who fail to improve their reputations, are substantial, especially if they are happy with the way things are.

What 2016 has taught us about corporate reputation is that the public is in the mood for change. And now it has a Government that is not just willing to enact change, but one that must pay attention.

The PM’s desire to address what she refers to as the "unfairness and injustice" that divides the UK is a direct response to the public’s call for a change that may come at a price businesses are not willing to pay.

Therefore, the focus in 2017 must be putting the lessons learned to good use.

Visit the Populus website to learn more about our corporate reputation research and read our latest report, "On warning": why business must improve their reputations.