INDIANAPOLIS: President-elect Donald Trump’s efforts to save jobs at Carrier Corporation from being outsourced generated $273 million in so-called "media value" since the start of the year, according to researchers.

The deal Trump brokered with the heating, ventilation, and air-conditioning (HVAC) company has received broad support from the general public, according to a Politico/Morning Consult poll released this week, in spite of suggestions he was playing fast and loose with the facts.

According to research firm mediaQuant, there have been more than 31.4 million media mentions across a variety of segments (see below) where Trump and Carrier were "significantly part of the same story."

The data is a snapshot of the period up to December 7 from back in January 1, 2016, when Trump first discussed the company’s plan to outsource jobs. 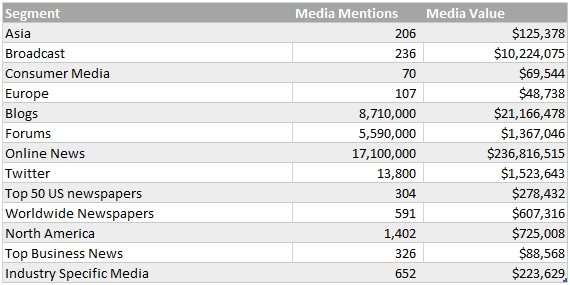 These numbers offer a small insight into the president-elect’s playbook that has generated billions of dollars in earned media. mediaQuant’s research shows Trump dominated all other presidential candidates in earned media, receiving as much as $5.3 billion in media value this year alone, although advertising value equivalency is regarded as a discredited metric in PR circles.

"Carrier is in an amazing position if the story is spun correctly," said mediaQuant co-founder Paul Senatori. "A corporate brand typically never gets into consumer publications. Unless a terrorist was caught using a Carrier air conditioner, I can’t imagine it pulling this type of attention."

While the Carrier story makes up a modest 6% of the president-elect’s total media value, it still represents a significant bump for the HVAC company.

Trump extended the story’s lifecycle by attacking a local Indianapolis union leader and attracting the attention of talking heads such as Sarah Palin and Glenn Beck.

But the spotlight has its own drawbacks. For Carrier, that means being cognizant of the heightened visibility, according to APCO senior counselor Jim Moorhead.

Moorhead laid out guidelines for how companies should prepare in the event the president-elect targets them, which has the potential to significantly affect stock prices. A recent example was Lockheed Martin, which was caught in Trump’s crosshairs on Monday.

In the short term, Carrier has made gains in brand recognition, won the approval of the incoming president, and turned the media in its favor with positive headlines, Moorhead said.

"But it’s unclear if it’s a long-term plus," he added. "The company is in the spotlight in a way not seen before. Its future moves will now be looked at with greater scrutiny. This will require thinking about outsourcing jobs and articulating why it’s necessary, why it is doing it, and what value it adds for customers."

The numbers provided by mediaQuant also highlight disparities in media coverage of the Carrier-Trump deal across different segments, with the lion’s share of mentions coming from online news.

Senatori compared it to the "long tail" of election coverage, where a majority of outlets don’t do first-generation reporting. They pick up stories from traditional media and either reprint or repurpose them by adding commentary or local spin.

"You add up that long tail that didn’t exist 15 years ago and it goes way up on the spreadsheet," Senatori said. "That’s where Trump got his huge media traction. It played to a non-fact-checking PR strategy, which both candidates had. But you could claim Trump had even more of that going on in his campaign."