Two of the five festive campaigns between them collected over 90 per cent of all votes this month, but the contest was won by Santa Forgot - the Christmas campaign for Alzheimer's Research UK, which shows Father Christmas developing dementia and being unable to deliver presents.

Santa Forgot scored 51 per cent of the vote, followed closely by eBay's Do good, feel good campaign, which managed just over 40 per cent.

See below for the full results and find out more about the winning campaign. 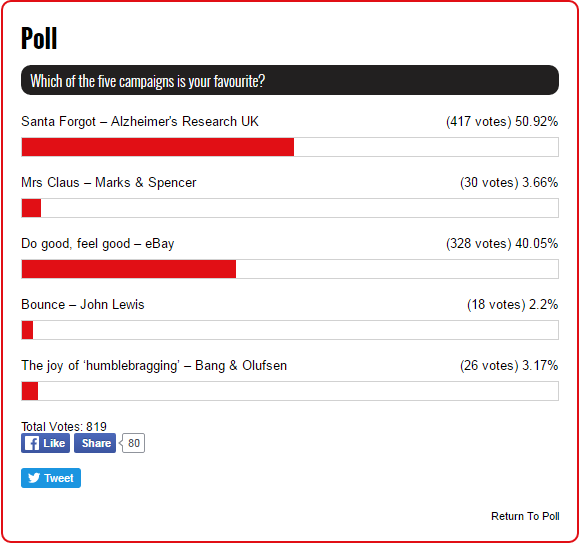 The emotional Christmas campaign film (below) for Alzheimer's Research UK shows Father Christmas developing dementia and being unable to deliver presents. The charity's CEO Hilary Evans admitted the video was "provocative" - indeed, it premiered after the 9pm watershed for fear it might upset children - but it's also thought-provoking. The cartoon was made by Aardman, the studio behind Wallace and Gromit, and devised by Freuds; evidence that PR agencies are more than capable of taking the creative lead on major campaigns.