In November, recall of businesses in the news was largely drowned out by Donald Trump’s victory and the aftermath of his election – noticed spontaneously by 88 per cent of the public – as well as speculation over Brexit negotiations. Nonetheless two companies featured highly in every week of this month’s top ten most noticed business stories: M&S and Tesco. 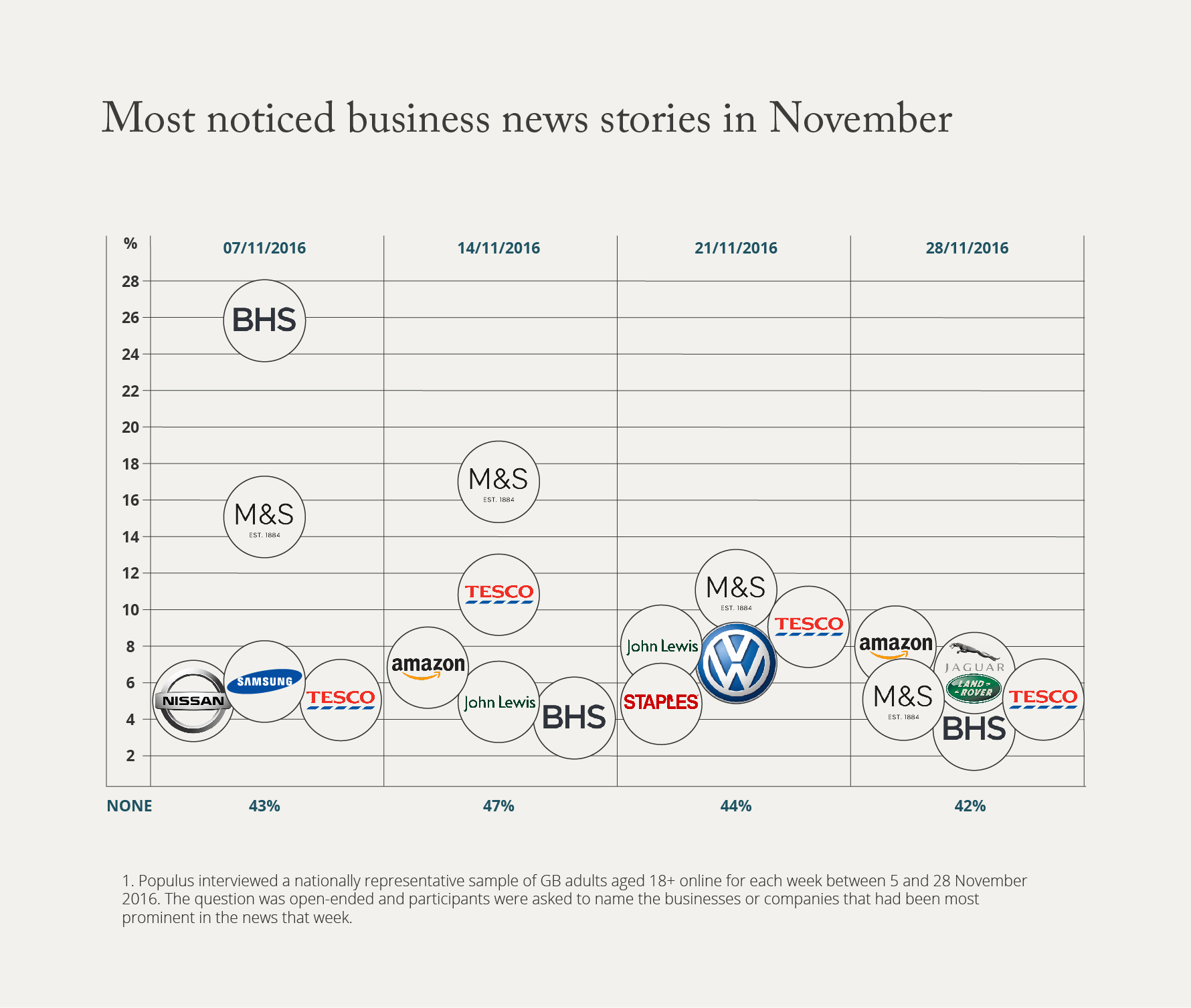 After six months in charge of M&S, new boss, Steve Rowe, is back in the headlines this month. He announced another fall in profits at the retailer with like-for-like sales down 5.9 per cent in its clothing & homeware division and down 0.9 per cent in its food division. He went on to reveal big changes which will affect the business over the next few years, including the closure of 53 international stores and 30 stores in the UK with the loss of thousands of jobs. This change shifts floor-space away from its troubled clothing division and towards its food division.

While some investors and analysts complain that Rowe’s plan to ‘stop the rot’ and revive the 132-year-old retailer is not radical enough, M&S is, at last, making an attempt to shape its destiny rather than just ‘soldier on’.

The retailer, which has seen declining revenues for the last five years, is betting that consumers will continue to value its specialist food offer based on ‘top-up shopping’ at a time when food prices are set to rise sharply. It is also betting on winning back shoppers from the 50+ female segment, dubbed ‘Mrs M&S’, by axing some of its more youthful fashion ranges and focusing less on catwalk trends and more on good quality classics for its neglected middle-age customers.

In recent years, M&S has targeted millennials through collaborations with Alexa Chung, Rosie Huntington-Whiteley, Kestin Hare and David Gandy. It had success with the ‘pink coat’ in 2013 and the ‘suede skirt’ in 2015, but these rays of sunshine were eclipsed by multiple overlapping ranges which failed to overcome young women’s reluctance to buy fashion in the same store as their mothers and grandmothers.

Rowe understands that retailers’ reputations depend on ‘being famous for something’. Over the last 10-15 years M&S has become the leader in the convenience category outmanoeuvring larger supermarkets by anticipating the country’s changing shopping habits. Over the same period, it has spread itself far too thinly on the fashion side of the business chasing trends and multiplying ranges to attract a younger demographic. Rebuilding a broken reputation takes time, but Rowe has taken the first step by setting out what M&S intends to ‘be famous for’: top-up food shopping and middle-aged fashion. 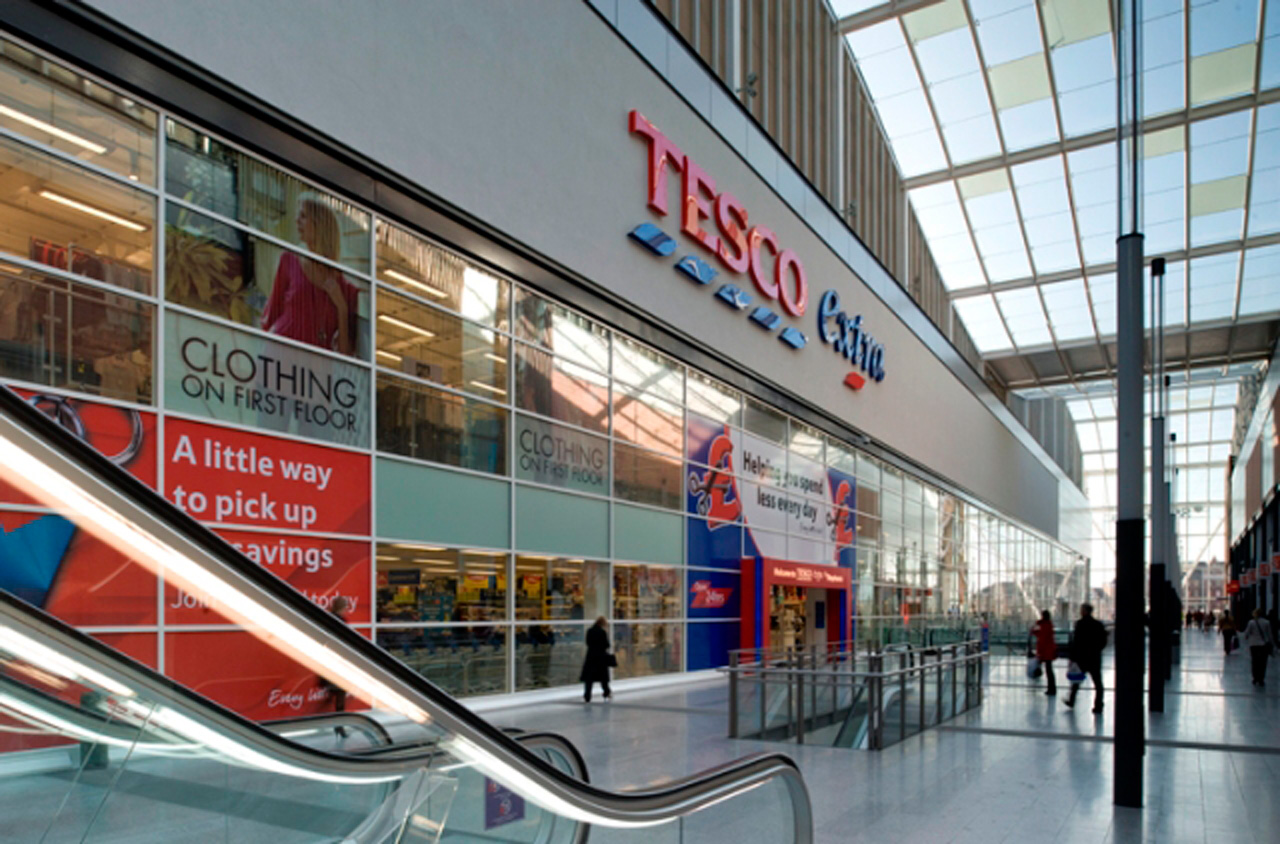 At the beginning of the month Tesco Bank froze online operations after fraudsters hacked over 9000 customers’ accounts and stole millions of pounds. TechWorld described the data breach as the second worst in UK history. The hack hits Tesco just as it was recovering from a torrid couple of years in which the company was stung by an accounting scandal and the biggest loss in UK corporate history.

Tesco’s compromised IT system threatens to undo the retailer’s reputational recovery, in which it had announced a return to profits and positioned itself as the customer champion in its Marmite-gate dispute with Unilever.

So far, Tesco has managed the crisis fairly well. It has:

However, an even bigger crisis looms. Investigators are looking into whether Tesco Bank ignored a warning about the security flaw in its payment systems that allowed fraudsters to steal from its customers. Last year Visa warned the financial community that hackers were taking advantage of a so called ‘91 glitch’ which enabled them to access debit card details. The National Crime Agency has begun a criminal investigation into whether or not Tesco Bank ignored or failed to act on Visa’s warnings.

To minimise further reputational damage, the retailer needs to continue to act quickly and sure-footedly. It should start now by assuring consumers that it takes the investigation very seriously and that, if found negligent, those responsible will be punished.

In the post-financial crisis environment where many people believe that the banks ‘got away with it’ because ‘nobody went to prison’ for their crimes, the last thing that Tesco’s reputation needs is to be linked to bad banking practice. That would put an immediate end to any reputational recovery that the business has achieved in the last year.