It's no secret that many consumers are turned off by an excess of ads. Indeed, data from YouGov Profiles shows that 72 per cent of American adults say they feel bombarded by advertising, and 44 per cent think commercials, billboards, and other promotional material are a waste of time.

The arrival of ad blockers has enabled the denizens of the web to push back against online advertising, and in a major way. One report estimates that, by 2017, 86.6 million US internet users will be using some sort of ad-blocking software. That's up from just under 70 million in 2016. For digital publishers who rely on display ads to generate revenue, this is a troubling trend.

An analysis of why people use ad blockers reveals that their motivations extend above and beyond a mere desire to escape bombardment by ads.

According to the YouGov Profiles study, 55 per cent of internet users with either an ad blocker or anti-tracking service installed on their web browser use the software to protect themselves from malware and viruses. 42 per cent hope to enhance their browser performance, while 5 per cent aim to mitigate the temptation to shop. 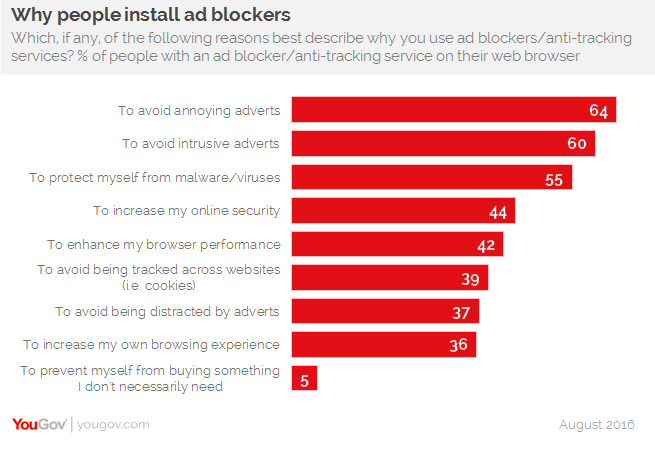 When it comes to how people deploy their ad blocker, the picture becomes even more nuanced.

Consumers with an ad blocker installed on their web browser, for example, are more likely than consumers with an ad blocker on their smartphone to keep the program running around the clock (48 per cent to 34 per cent). The former group is also more likely than the latter to say they sometimes turn off their ad blocker upon visiting certain websites to access the full content (31 per cent to 18 per cent). 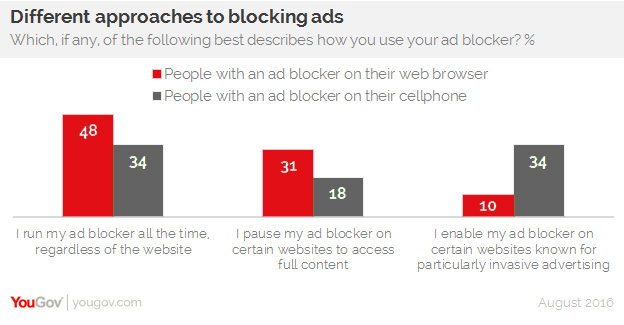