Why not? – easyJet brings The Netherlands to London

As part of easyJet’s pan-European ‘Why not?’ campaign, content agency VCCP Kin, alongside experiential agency Bearded Kitten and VR systems business Motion Pixel, created an immersive experience on the other side of a plane door installed on East London’s Shoreditch High Street. Visitors were taken on a whistle-stop journey through contemporary Holland, guided by a cast of actors. Those unable to visit the experience can still see it via a 360° film. The budget airline worked with the Netherlands Board of Tourism & Conventions and Amsterdam Airport Schiphol to deliver the campaign.

Spirit Media enlisted Jordan Stephens, one half of hip-hop act Rizzle Kicks, plus a host of celebrity influencers, for #IAMWHOLE – an NHS/YMCA anti-stigma campaign launched to coincide with World Mental Health Day on 10 October. Backed by, among others, James Corden, Ed Sheeran (pictured) and Dermot O’Leary, who used their influence on social media to spread the message, the central idea was to encourage people to post a selfie with a circle drawn on their hand to raise awareness. #IAMWHOLE, which was aimed at 11- to 24-year-olds, kicked off with the live launch of song Whole in the 162m-high BritishAirways i360 venue on Brighton beach. A national and regional PR campaign ran simultaneously.

Two very different campaigns were activated to promote the seventh series of US zombie drama The Walking Dead making its UK debut on Fox – both widely shared on social media. Social agency SHARE Creative posted videos showing Sky News-style footage of zombies (or "walkers") spotted in various locations. Facebook users were shown different videos depending on their location (the London clip is below).

And now for something completely different: PR agency Fever had John Cleese present a sarcastic, condensed commentary (below) of what had happened in The Walking Dead thus far, to get fans old and new up to speed.

To coincide with the sixth ‘Stoptober’ – a Public Health England campaign to promote quitting smoking in October – Johnson & Johnson created the ‘One breath’ film for its smoking-cessation brand Nicorette. It tells the inspiring story of Daan Verhoeven, a former pack-a-day smoker turned professional freediver, as he takes a three-minute, 64-metre dive in the ocean, describing the sensations and how giving up smoking helped him achieve record dives.

The NSPCC has some big stars involved in its Little Stars campaign – the largest (physically) being the 1,800 Christmas lights along Oxford Street that were lit on 6 November. The children’s charity’s campaign asks people to visit a special website to pick a light and donate £5 to sponsor it in the name of a ‘star’ in their life. The switching-on ceremony and events on the day were presented in partnership with the charity, toy company Hasbro and radio station Capital. The campaign also includes an 11-week content partnership with the Metro and Daily Mail, which includes stars such as actor Michael Sheen speaking about the importance of the charity’s work. 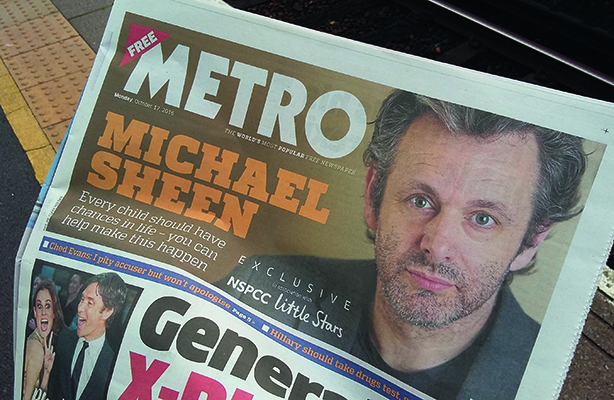