The campaign launched in August with help from the Good Agency, but will be ramped up to keep up the pressure on the Government as November's Autumn Statement approaches.

The union said that the awareness campaign, which invites people to say 'thank you' to staff in health, education, home-care and other services, which have helped them or their loved ones, was its biggest for years.

Unison has been thanking individuals itself on social media with the hashtag #thankyourchampions, as well as inviting people to fill out a short questionnaire on a website specially created for the campaign, with incoming 'thank yous' plotted out on a map of the country.

The campaign has also run adverts featuring a variety of public sector staff who made a difference to people's lives - at the top of this story is the explanation of how a police press officer helped an assault victim feel safer, and at the end is the tale of how one man owes his life to a clerical assistant in the NHS.

Unison general secretary Dave Prentis said: "We’ve launched this campaign because in UNISON we know how vital it is to stand up for public services and the workers that provide them. Too many staff feel that the services they provide are undervalued and that higher demand and a lack of funding means they have to try and do more with less." 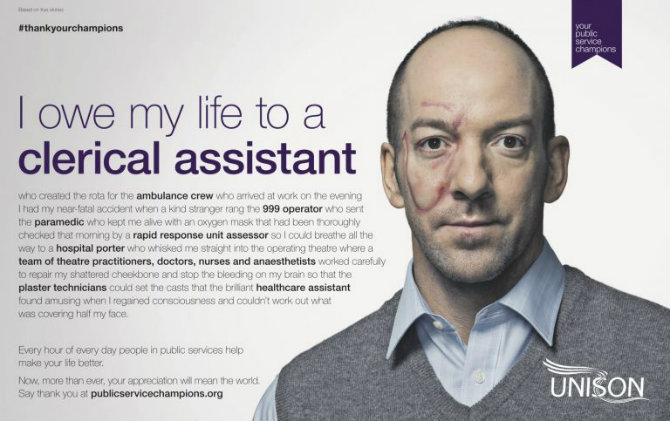