In September, ongoing business stories recalled by Britons included the sad demise of BHS and continuing problems at Sports Direct. EDF and Yahoo! also punched into the popular consciousness as the Government finally agreed to build at Hinkley Point and the search engine revealed the scale of the world’s biggest data hack.

However, the biggest business story of the month belonged to Apple. 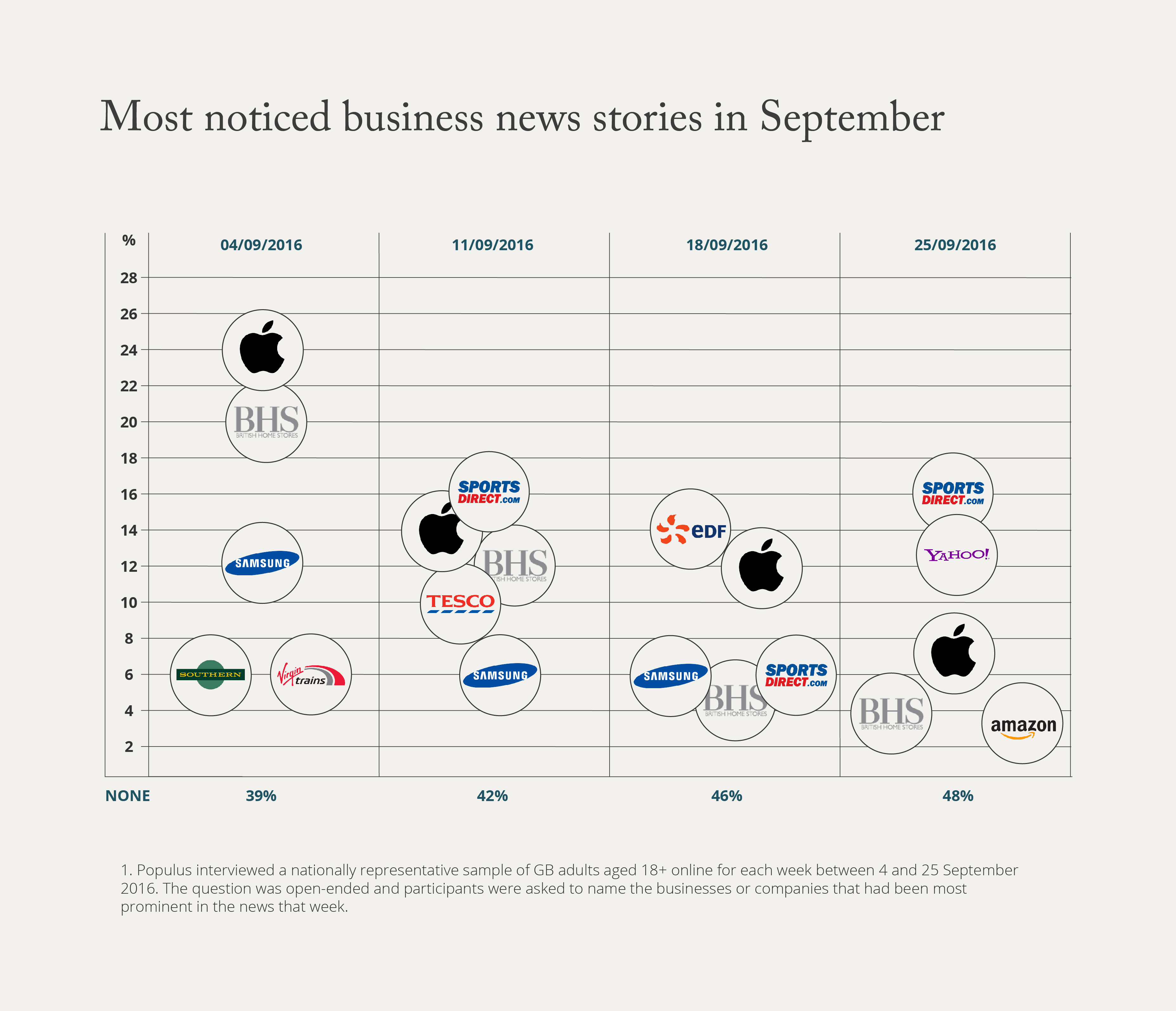 EU faces down Apple over tax

On 7 September Apple launched its hugely anticipated iPhone 7, but that wasn’t the reason that most people noticed the company in the news.

At the beginning of the month Margrethe Vestager, the EU competition commissioner, ordered Irish tax authorities to claw back up to €13 billion in underpaid taxes from Apple. In the last decade Apple has paid only a 4% rate of tax on nearly $200 billion of foreign profits channelled through its Irish subsidiaries. The EU argues that Ireland offered – and Apple accepted – a ‘too good to be true’ sweetheart tax deal which distorted competition and amounted to illegal state aid.

Both Apple and the Irish Government deny any wrongdoing. Apple CEO Tim Cook insists that the tech giant is the biggest taxpayer in the US and is "not a tax dodger – we pay our share and then some". The Irish establishment argues that Apple’s tax deal is no different to that of any other company operating in Ireland, and that the EU’s move is an ultra vires infringement of its sovereign right to set corporation tax.

Like Apple, Ireland is set to appeal the ruling to the European courts. But this isn’t just a dispute between Brussels, Apple and Dublin; the appeal will spark the largest tax dispute in history and ignite a political showdown between the EU and the US.

The US Treasury has accused the EU Commission of behaving like a ‘supranational tax authority’ and threatening international tax reform agreements. A white paper commissioned by Treasury secretary Jack Lew warned that Europe should prepare to face unspecified "potential responses" from the United States.

In addition, 185 CEOs from some of America’s biggest companies have urged EU leaders to stop the European Commission’s claim for back taxes from Apple. They warn that the commission’s decision, if upheld, would undermine the legal certainty that businesses need to make large investments in Europe and would result in ‘a grievous self-inflicted wound for the EU and its citizens’.

Tensions are soaring in the US Treasury and across Corporate America because the stakes are so high. Apple is not the only US company facing scrutiny over its tax affairs in Europe; Amazon, Starbucks, Facebook, Uber and McDonalds are only a few of the companies that have come under the microscope in recent years.

According to Forbes, US multinationals have parked $2.1 trillion of profits offshore using ultra-low tax regimes in countries like Ireland and Luxembourg. If the European court supports the commission’s case against Apple, it will establish a precedent which could cost US multinationals hundreds of billions of pounds in underpaid taxes.

The US Treasury sees the EU Commission’s move as an aggressive ‘land grab’ for the cash reserves of large US companies that should eventually be repatriated and taxed in the United States. Other countries are beginning to get in on the act.

Only two weeks after Vestager’s announcement, Japan staked a claim on a share of Apple’s overseas cash pile demanding ¥12 billion in back taxes from the Silicon Valley giant.

Some would argue that national tax authorities squabbling over the overseas profits of Apple and others suits multinationals because it delays international tax reform and allows big corporations to continue to pit countries against one another and move profits to the lowest tax domiciles. But, according to recent Populus research, public support for big business is at a low ebb with only 15% of the UK population saying that they are positive towards multinationals.

If the European court rules in favour of Apple this time, people incensed by the unfairness of a system that enables global companies to pay much lower rates of tax than they do, will not rest. Populations across the western world are becoming disillusioned with a system that fails to distribute the benefits of globalisation fairly. If nothing changes, people will eventually force governments to cooperate and bring an end to tax inequity.

To protect their reputations and some of their tax advantages, multinational companies need to: (a) stop parroting that they pay all the tax that they owe in every jurisdiction, (b) concede that the global tax system is broken and (c) accept that they should pay more tax in the countries where they generate their profits.

At the same time, they need to demonstrate that their contributions to countries and societies outweigh minor tax advantages that may arise from differences in national tax regimes. By conceding ground today, multinationals may be able to avoid a backlash tomorrow from governments trying to appease public opinion on the inequality of tax rates between corporations and individuals.