Is this the most unfair buck passing in PR history? Liverpool FC boss Jurgen Klopp "turned the air blue" (copyright every newspaper ever) on live Sky TV after Wednesday night’s EFL Cup win against Derby, when, complaining about the lack of TV coverage, he complained: "They show every fucking game in Germany!"

After receiving a swift talking to by Sky reporter Pete Colley, Klopp went on to blame none other than a club press officer. "I learnt it from Matt McCann!" the German claimed. Flack refuses to believe a PR professional of McCann’s calibre would use such foul language in any context.

Anyway, one assumes the two get on well really; check out this film of the Klopp wishing him happy birthday during a press conference a few months ago:

One Tory's big problem with the Tory Conference

As Flack prepares to head to the Labour Party conference in Liverpool from Sunday, and the Conservative equivalent in Birmingham a week after, we find one Tory councillor's rather bluntly put reason for staying put.

Flack understands that a charity looking to see which councillors it could meet and schmooze in Birmingham had contacted one London Tory asking whether he'd be there.

"No way - the last thing I'd want to go is hang around with that many Tories," responded the councillor, a working class, self-made man who Flack perceives not to be on the best of terms with the dominant toff section of the party.

THE ROBOTS WILL KILL US ALL! (Sort of)

Flack knows as well as the next nom de plume that technology is a wonderful, if scary, thing. At a Martin Sorrell-adorned event run by Hill+Knowlton Strategies this week, two speakers provided further warnings of the latter.

"We've got to be careful - as content creators, a horror film can now be emotionally scarring," he said, such are the capabilities of modern technologies. Not inflicting emotional scars is surely a good KPI for the modern PR.

Keeichi Matsuda, a filmmaker who showed one of his works (below) depicting a nightmarish near future in which augmented reality has sucked out our souls, said: "There's always a trade-off when every new technology arrives... people will get hurt and there will be consequences."

Putting the staR in PR

Flack enjoyed the news this week that Bell Pottinger - best known for working in politics and the pinstriped world of financial PR - had a new, unusual, creative setup including a consultant who works at the agency part-time alongside being a singer-songwriter, and another who used to act on a South African soap.

This got us thinking that among the PR ranks there must be plenty more aspiring (or actual) rock stars, thesps and people demonstrating all sorts of creative talents outside of the office. Tell us all about it...

Once you've done that, check out Bell Pottinger's folk-y finest in action.

Cock-up? Look on the bright side

Some eye-opening insights into the nature of PR and TV were on offer in a panel debate last night at Manchester’s MediaCityUK. At one point the subject turned to the difficulty in getting your clients or brand mentioned on the telly, particularly in reference to a major sponsorship – for example, the Barclays Premier League – and especially on the BBC.

"Getting a brand mentioned directly on a news programme usually only happens when there’s a cock-up," said panelist Paul Newman, director of comms at infrastructure company and MediaCityUK owner Peel Group. "That’s just the way it is."

As former comms director at the FA, this was perhaps something he encountered frequently. In reference to cock-ups at his former job, Newman sighed: "There was one every day."

Ashley tells it as it is

Flack grants the 'crushingly honest nugget of self-reflection of the week' award to – drum roll please – none other than Sports Direct boss Mike Ashley.

This week, Ashley revealed what our readers have doubtless known for some time, describing himself as a "PR nightmare".

Yes, thank you Mr Sports Direct for that statement from the department of the bleeding obvious.

Ashley chose the BBC Breakfast sofa as the venue for his confession, explaining – or trying to – why he travels to work by helicopter, why he walks around with a wad of £50s in his pocket in a manner reminiscent of Harry Enfield’s ‘loads-a-money’ persona from the 1980s and how this looks to his staff, who are on the minimum wage.

Still, keeps everyone in work doesn't it?

Having digested PRWeek’s recent study into the relationships between PRs and journos, Flack was tickled to read this contribution to the debate around the perfect press release from Heineken UK.

To announce the national launch of its new Blind Pig cider, the brewer compiled a tongue-in-cheek press release to highlight the drink's rule-breaking character.

Dubbed as a cider with "the spirit of the night", the release swiftly gets off on the wrong foot by announcing it as "ideal for those summer days". The joke release is peppered with comments from the Blind Pig Team correcting the numerous clangers.

Anyway, have a gander: 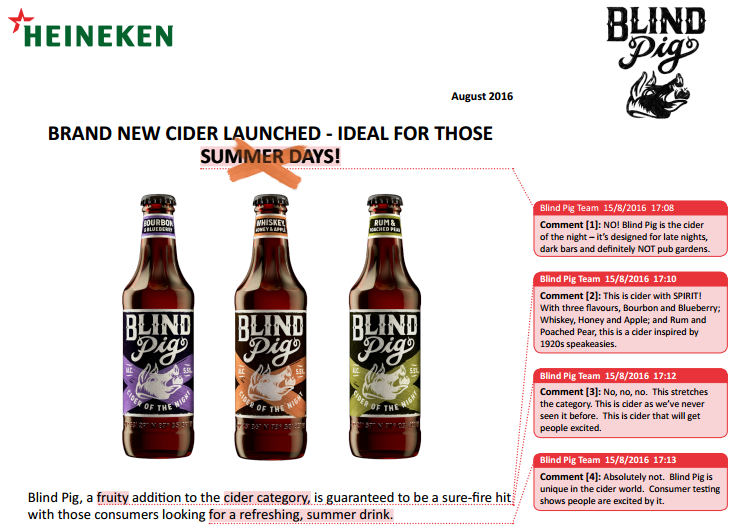