The report by the University of Oxford's Reuters Institute for the Study of Journalism and PRIME Research explored how the UK press covered the EU referendum, examined the key arguments, tone of articles and what areas of focus were in the weeks leading up to the vote.

It looked at 3,403 articles discussing the referendum from nine newspapers, of which 2,378 were explicitly focused on the referendum. The volume of articles was greatest in the Daily Mail and the Daily Telegraph, while tabloids such as the Daily Star and Daily Mirror had the fewest.

Discussion of the vote and campaigns dominated the headlines and were mentioned in almost half of them in total – more than the arguments themselves, while just two per cent mentioned the referendum and Brexit in general. 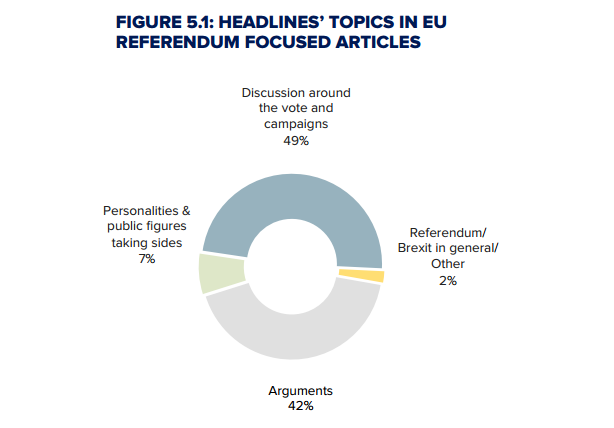 There were also relatively few headlines looking at forecasts of the results, while only eight examined the possible legal implications of the referendum.

Of articles focused on the referendum, the 'remain' campaign’s strategy and comms approach was the main talking point bar discussion about the actual vote. That was followed by coverage on personalities taking sides, the Brexit campaign strategy, public interest, the future of the Tory party and then other political implications. 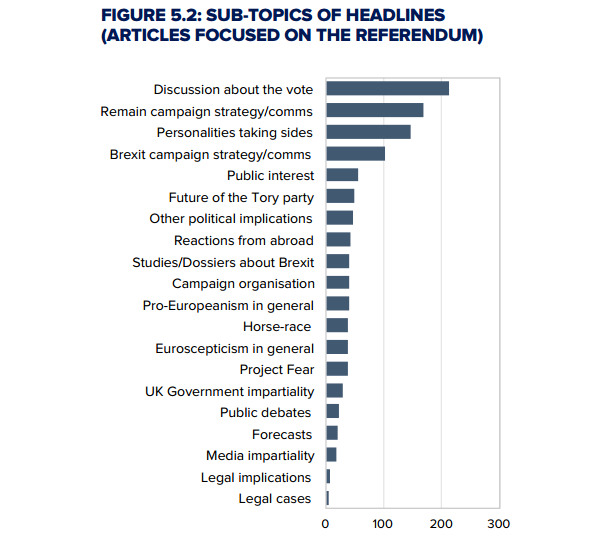 Of the messaging, the economy was by far the most discussed topic, dominating 45 per cent of all messages analysed by the Reuters Institute in its sample. A quarter of all argument-based messages covered sovereignty, 16 per cent centred on migration, while regulation (10 per cent) and security (four per cent) were less visible.

Dr David Levy, director of the Reuters Institute and one of the authors of the report, said: "The research reveals a picture of highly polarised press coverage, reliant on a narrow range of voices, and where coverage was relatively more focused on the content itself and personalities than any of the complex issues at stake.

"In that sense, in spite of some notable exceptions, the press was generally better at reinforcing the views of decided voters than in giving undecided voters, seeking broad facts and high-quality information, the evidence to make up their own minds."

The full report is available on the institute's website.