There has really been only one story over the past quarter, and that is Brexit. People were consumed with whether we should vote to leave the EU, coming to terms with the fact that the country opted to do it and, having done so, trying to decide what it actually meant. For the most part, they were not paying attention to business news.

Populus’ Business Top Ten Most Noticed data either side of the EU referendum vote shows that on most weeks almost half of British adults could not recall any business news stories. Indeed, there were only two occasions on which the most noticed news story was recalled by more than half of the population, BHS’ liquidation and EDF’s decision to build nuclear reactors at Hinkley Point only to have the deal paused by the British Government.

For companies, the verdict delivered on 23 June has consequences that go beyond the direct effects of a weakening pound and the uncertainty surrounding the kind of deal the UK will secure with the EU and the period of time in which that will happen. The most obvious of these is political change. Not only have David Cameron and George Osborne departed, but gone with them are an entire cohort of colleagues and advisers who have helped shape the policy and regulatory direction of the country since 2010. There is a change in tone at the heart of Government, which has the potential to change the way businesses operate. 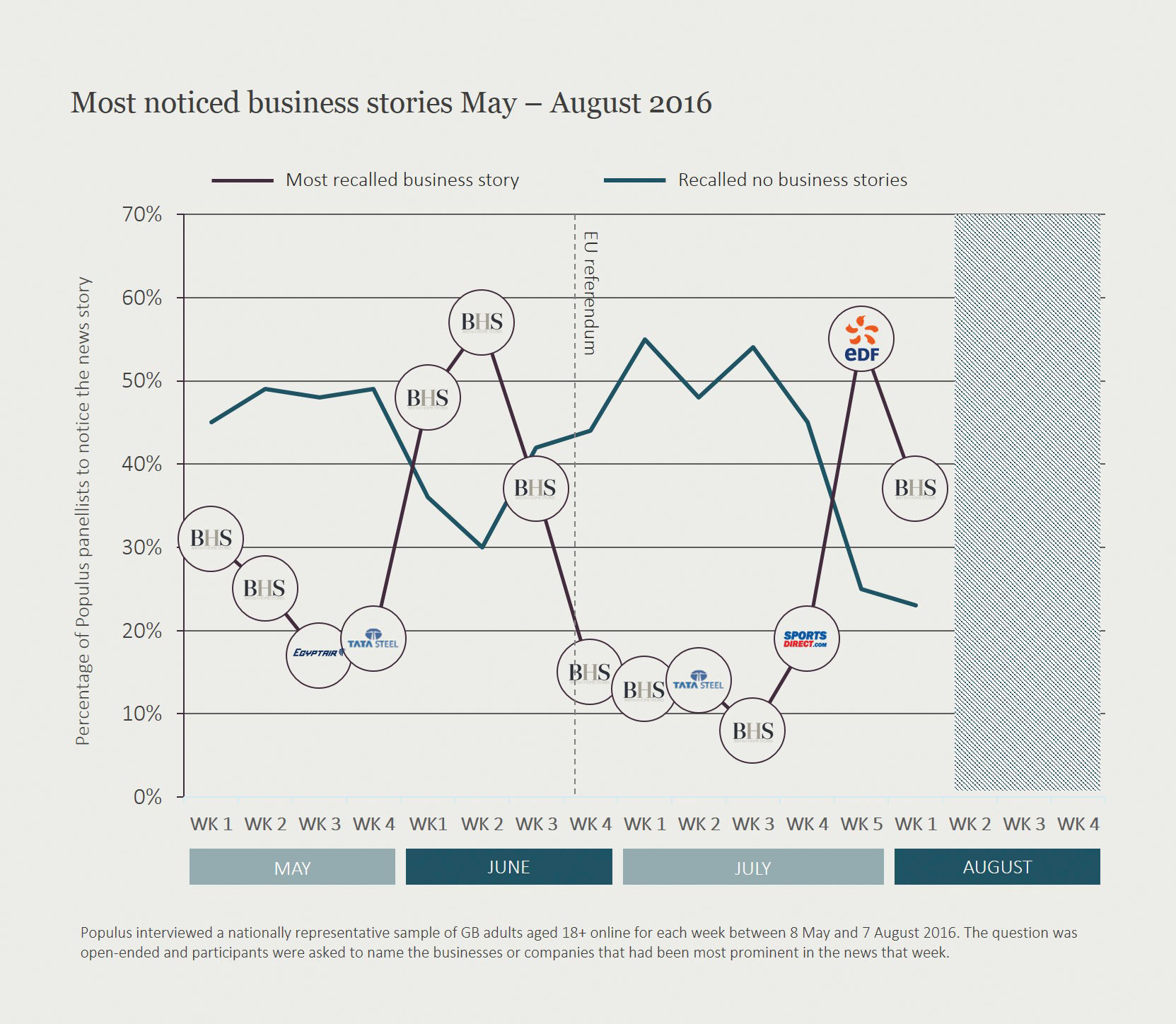 Overlooked voters
In place of broad-based compassion, frequently expressed with the lightest of touches from Whitehall, there is an expressed willingness to shake things up: industries, business and public services where these are not working in the interests of ordinary members of the public. It would be a mistake to write this off as the early good intentions of a new administration.

Theresa May owes her position as Prime Minister to the fact that too few people felt themselves sufficiently vested in an economic and political consensus subscribed to by the bulk of the media, political and business classes and their support services. Bluntly, a lot of us have been doing very nicely for quite some time, whether under a Labour, Coalition or a Conservative Government regardless of odd grumbles about EU bureaucracy and mission creep.

However, a lot of other people, at best, feel they have missed out on the benefits we take for granted and, at worst, believe these benefits have been earned at their expense and passed on to those who have made little or no contribution to this country. Under these circumstances, a one-time opportunity to break with fatalism, to "take back control", was powerful enough for many voters to overcome their sense of economic risk.

If business leaders cannot curb the excesses of big business, governments, emboldened by electorates disenchanted with globalisation, will

It is easy to second guess Cameron for providing that opportunity – though more difficult to chart the alternative course he could have taken with a Commons majority of 12 – but the referendum did not unleash these divisions in the country, it simply exposed them. This was a result 25 years in the making, and it is that fact which ought to exercise business as much as the result itself.

Tories’ unique positioning
The UK’s political parties have all reacted to Brexit differently. The Liberal Democrats eye a revival in being committed to overturn it. Labour has used it as a pretext to try to dislodge Jeremy Corbyn before he costs it seats at a general election. The SNP seeks to use Brexit as a pretext for a referendum on Scotland’s future within the UK. UKIP wants a new leader who can do to Labour in former Northern and Midlands heartlands what the SNP did to it in Scotland. Every party wants to use Brexit as a way of changing the pre-referendum status quo. Every party, that is, except the party of government.

The Conservatives’ challenge is different. Less than 18 months ago, Cameron delivered the first Conservative majority Government since 1992. It is no coincidence that he did so by assembling the broadest coalition of people prepared to vote Conservative since John Major. These people ranged from previous Liberal Democrat and Labour voters, who prioritised Cameron’s promise of economic competence over Ed Miliband’s pledge of more social equality, to those who were tempted by or had flirted with UKIP, but finally wanted a say on Britain’s membership of the European Union.

To a much greater extent than the other parties, the 2015 Conservative vote was a mixture of what turned out to be Remainers and Leavers. To win again in 2020 May needs to reassemble it or something like it.

This is what should interest business, for if there is one thing that unites many of those who voted for Britain to leave the European Union with a large number of those who voted to remain, the graduates with the school-leavers, the young and the old and the socially liberal with the more socially conservative, it is likely to be this: that some of the human and environmental excesses of globalisation, the conduct of some businesses and business leaders and the raw deal that some regulated markets give consumers are no longer acceptable. The ends do not always justify the means, particularly when a sizeable proportion of the population feel they have not shared in the proceeds.

Anger at arm’s-length rulers
Recently the US commentator Katherine Miller described how Donald Trump had put paid to a strand of US conservatism inside the Republican Party that can be traced back to Barry Goldwater more than 50 years ago. "Trump is all about government," she said. "He is concerned with the inactivity of the state, not the tyranny of power. The idea that you don’t want government in your life, the premise of movement conservatism for six decades, is gone."

Surveying the scene in Britain, Brexit could prove a similar watershed. Its Prime Minister has pledged to be tough in negotiating Brexit, but also tough on the causes of Brexit. Business needs to put its house in
order before ‘taking back control’ gets out of hand.

The Prime Minister has pledged to be tough on the causes of Brexit. Business needs to put its house in order before ‘taking back control’ gets out of hand

Almost all of the most noticed business stories this quarter are about businesses failing to put their house in order, not ensuring that value is distributed to the elite and the many. Sir Philip Green and his cohorts built fortunes while a gaping hole in BHS’ pension fund became unmanageable.

A parliamentary inquiry found billionaire Mike Ashley grew Sports Direct into a retail giant by treating workers "without dignity or respect" and "as commodities rather than as human beings". EDF’s Hinkley Point deal will make it billions of pounds and, if it goes ahead, will be funded by the UK population for at least 30 years at a guaranteed price, which is more than double that of current electricity costs.

In the new emerging political environment, if business leaders cannot curb the excesses of big business, governments, emboldened by electorates disenchanted with globalisation, will.