August is traditionally a quiet month for business news; and so it has proved again this year. With many enjoying their summer holiday and tuning into the Rio Olympics, only a quarter of the population is able to recall any individual business in the news this month.

That the Olympics is identified as the most noticed ‘business news’ story in the third week of the month can be attributed more to media saturation and patriotism than to the business of delivering the Rio Games or the IOC’s partial ban on Russian athletes. 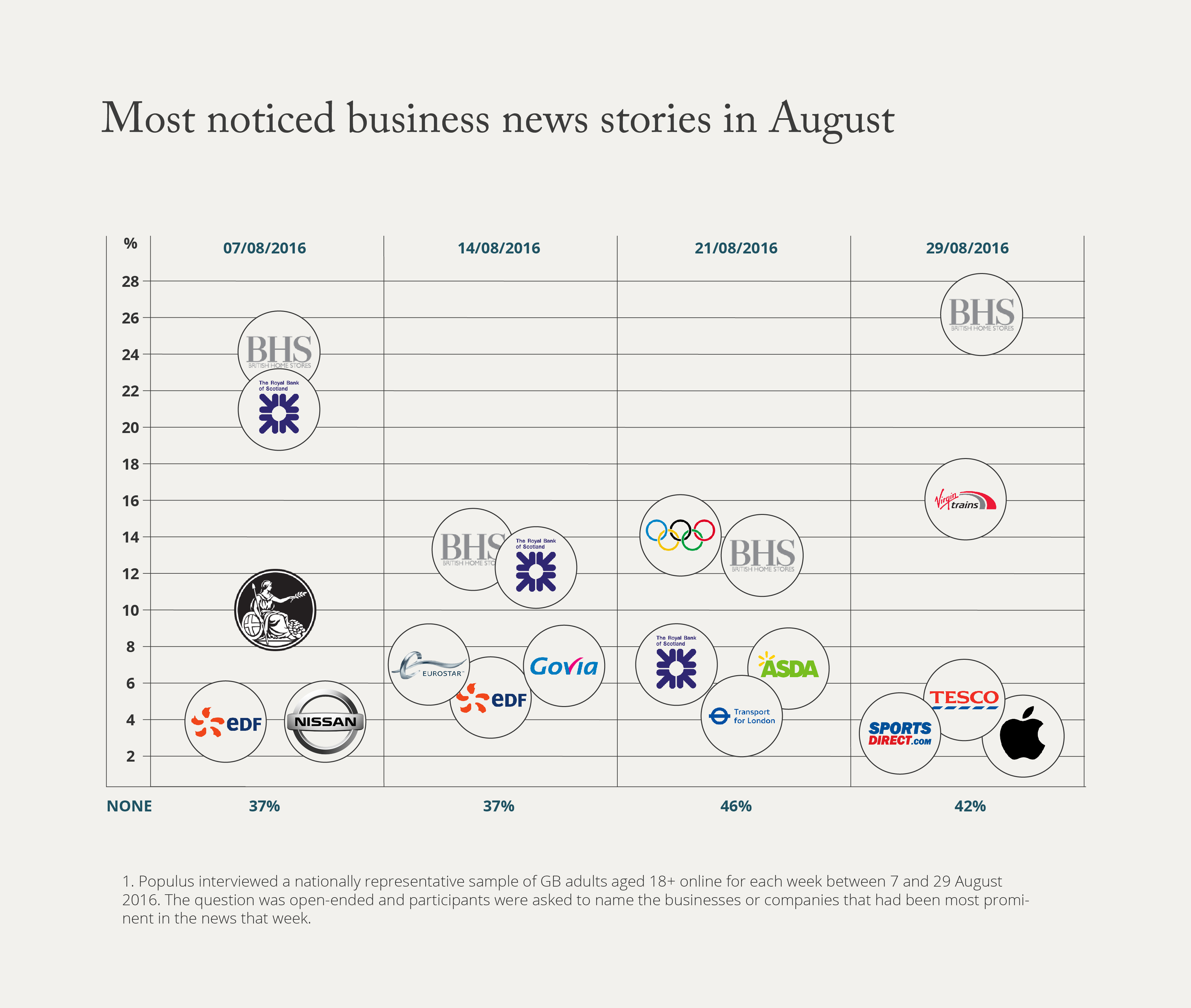 In 17 of the past 18 weeks BHS has been the most or second most noticed business story and the saga of BHS’s collapse features prominently in the minds of people again this month. The disappearance of a household brand from the high street after 88 years; the tragedy of 11,000 employees losing their jobs and perhaps part of their pensions; the retail tycoon with a penchant for extravagance; the MP calling for the tycoon’s knighthood to be stripped; the thrice-bankrupt entrepreneur as fall-guy; and the cast of mysterious advisors who stood by while the business disintegrated, have kept the nation transfixed for months.

The issue that evokes the most spleen in the BHS story is the charge that Philip Green acquired the company with a pension scheme in surplus, and that he allowed the scheme to fall into an untenable £571m deficit – while paying shareholders, including his family, hundreds of millions pounds in dividends.

The extent to which Green is responsible for BHS’s yawning pension deficit will come out in the wash, but much more worrying is the fact that since the financial crisis many of the UK’s defined benefit schemes – accounting for the pensions of 11 million people – have gone from surplus to deficit. The actuary, Hymans Roberson, estimates that in aggregate the schemes are underwater to the tune of £1tn due to people living longer than companies had initially budgeted for and record low interest rates, which limit the returns that pension schemes can achieve.

If interest rates – the key determinant of pension liabilities – remain at current low levels for much longer, the pension deficits of many of these schemes will become unmanageable. Eventually, pension commitments may turn their sponsors into zombie companies as more and more investment capital is used to pay pension promises. What’s worse; the backstop is under-funded. The Pension Protection Fund, a mutual insurance scheme established in 2005 to meet the obligations of any defined benefit schemes that fail, has assets of £23bn and would be quickly overwhelmed were a number of large schemes to enter it. The result would be that supposedly ‘gold plated’ pensions of thousands, if not millions of people would be subject to severe cuts.

The reputational damage to companies for failing to meet their pension promises and to the Government for failing to head off this looming disaster will be made even more acute if the public are not made aware of the risks before the tide of failed schemes begins to swell. The worst may never happen, but it‘s time for companies and the Government to begin planning for an uncertain future. This means starting the painful conversation with the public about what could happen to their pensions.

It also means starting to think the unthinkable: companies need to start prioritising pension commitments over investor returns; trustees need to relieve the burden of sponsor companies by allowing retiring members to take cash lump sums out of their pots at retirement; the Government needs to amend pension legislation to lighten the burden of past pension promises; and members need to be more open to the possibility of sacrificing some benefits to avoid turning sponsors into zombie companies. These are difficult decisions, but it is the responsibility of companies and the government to be vocal about the tsunami on the horizon.

In response to Brexit forecasts of falls in house prices and incomes, higher unemployment and a spike in inflation, Mark Carney announced a sweeping stimulus package at the beginning of August. The Bank of England dropped interest rates to an historic low (from 0.5% to 0.25%) and resumed quantitative easing, buying a further £70bn of gilts and company bonds.

The theory is that lower interest rates and cheap money through quantitative easing encourages companies and people to spend and invest rather than save, which will prevent the economy from slipping into recession. To some extent, this theory worked in practice during the banking crisis as it allowed over-extended households and companies to service their debts and avert a wave of defaults which would have crushed the banking sector and the wider economy.

However, in an environment where interest rates are already almost zero and gilts yields are at historic lows, this medicine is nowhere near as effective as during the financial crisis – plus, the side-effects are getting worse. First, big corporates are not playing ball; instead of using the cheap money to invest and innovate for future growth, many, like HSBC, are buying back their own stock to keep investor returns high. Second, there is little evidence to suggest that frustrated entrepreneurs have been waiting for a measly 0.25% cut in interest rates to launch their next big idea. Third, low interest rates and quantitative easing are pushing up UK pension liabilities to untenable levels and may subject millions of people to severe cuts in their pensions (see story above). Lastly, quantitative easing has been a powerful driver of rising inequality; it has favoured the rich by forcing up asset prices, but has done little for those with few assets.

Concern that the fruits of economic recovery were not being shared fairly was a major factor in Britain’s vote to leave the EU and contributed to the downfall of the Cameron government. Rather than allow the Bank of England to continue to flog the dead horse of low interest rates and quantitative easing, it is time for the May government to step up and begin direct fiscal stimulus with big investment in infrastructure projects like the transport, energy, broadband and university networks.

Continuing to pursue an austerity agenda will damage the new government’s economic credibility and its reputation with a population fed up with austerity, inequality and intergenerational unfairness. Let’s hope that Philip Hammond is true to his word when he said that the government is willing "to reset fiscal policy" in the Autumn Statement.