News Analysis
Tweet
Share
It may be true that one profession would struggle to survive without the other but, while many PRs and journalists work well together, sadly the relationship can be characterised by misunderstanding, mistrust or even anger on both sides.

PRWeek carried out a detailed investigation into hack-flack relations in the current media climate, surveying journalists and PRs over the course of a month to lift the lid on how both sides regard the relationship.

Our online survey garnered 300 responses. Here are the main findings: 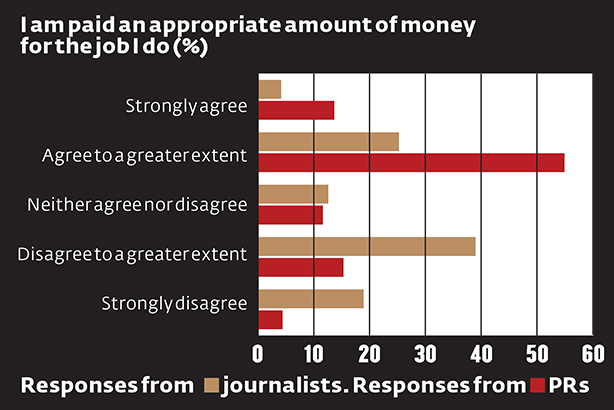 If there is one reason why journalists regularly join the ‘dark side’, it is to work with happy people in funky offices and enjoy a better work/life balance. No? OK, the main reason is, of course, pay.

The survey found widespread dissatisfaction with pay among the journalists, with 58 per cent either disagreeing or strongly disagreeing with the statement "I am paid an appropriate amount of money for the job that I do", compared with nearly 70 per cent of PRs who agreed or strongly agreed with the same statement.

Only a third of journalists thought they were paid enough, while roughly the same proportion of PRs said they thought they should be paid more. But are journalists actively jealous of what their PR counterparts receive in their pay packets each month? Some 35 per cent admitted they were slightly green about what the other side earns while 31 per cent said they were not.

One journalist mounted their high horse to tell the survey: "It does seem unjust that those paid to keep the public in the dark earn more than those who fight for transparency and accountability." Another journalist was more sanguine, writing: "They are paid more but they don’t seem to have as much fun."

Strangely, no PRs told the survey that they were jealous of the pay levels in journalism, while a decisive 81 per cent said they were not remotely jealous of what journalists earn.

One PR wrote: "A major factor in my moving from journalism to PR was the pay and job security."

Another was kind enough to write "we all know journalists aren’t paid nearly as well as they should be" and a third, less kindly, said: "You’re having a laugh, aren’t you?" We rest our case.

PRs and journalists are pretty satisfied with their jobs 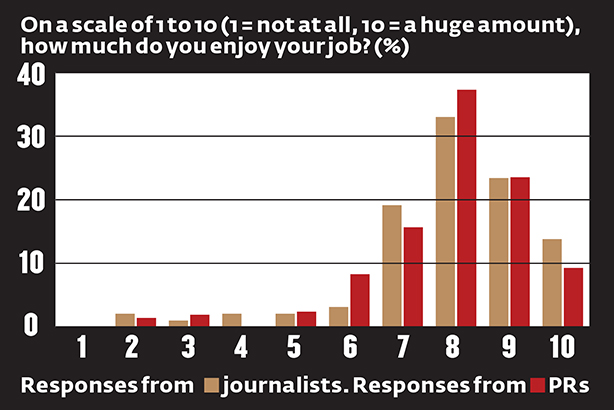 When Labour leader Jeremy Corbyn was asked for his thoughts on the European Union in the run-up to the June referendum, he famously – or infamously – gave it a lukewarm "seven, or seven and a half" out of 10.

We asked journalists and PRs to rate their job satisfaction on a similar scale (out of 10) and found many on both sides damning their professions with faint praise, in a manner worthy of Corbyn.

PR is still a crucial information source, according to many journalists 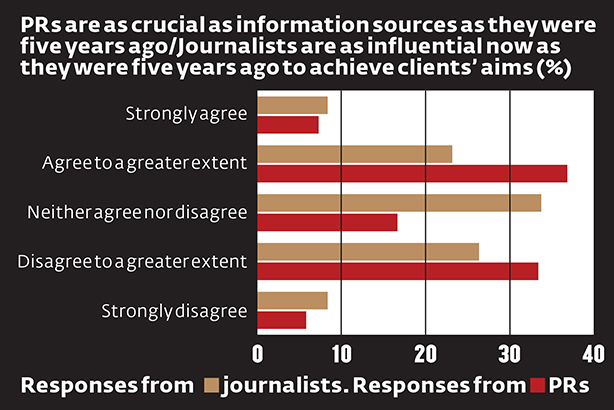 The media landscape is in a state of continuing flux as it adjusts to the digital age and continues to produce quality journalism with ever-shrinking resources. And, of course, as the media adapt, so too does the relationship between journalists and PRs.

Some journalists admitted, ruefully, that PRs were more important in the current media landscape. One said: "They are more crucial, regrettably, because newsrooms are far shorter on staff than they were five years ago."

But more traditional voices made it clear that, until the bitter end, they would fight a stiff rearguard action against the encroachment of PR into the media.

One told the survey: "PRs were never crucial information sources. No half-decent journalist uses PRs as a source or even speaks to a PR until they need a right of reply... The practice of restricting all media communication to a PR officer is appalling and should be strongly resisted."

PRs, meanwhile, made it clear that the influence of journalists on the success or failure of their work was waning.

Many PRs commented on how the rise of social media and influencers had circumvented the need to get stories into traditional media outlets. However, they said journalists provided the crucial balance and impartiality too often missing from social-media outlets.

One PR told the survey: "Social-media influencers have become influential, to some extent, to drive a news story. However, journalists provide mindfully considered content to flesh out details of a story, which is vital to drive a thoughtful conversation."

However, another PR was damning of the influence of journalism, commenting: "The days of a journalist or editor being the gatekeeper as to whether a PR campaign/story is a success or not are over."

Read the final part of our 'Hacks vs Flacks' survey tomorrow to find out what PRs and journalists love and loathe about each other and which media outlets and PR agencies they admire most.
Tweet
Share