Langford, who had been diagnosed with motor neurone disease at the start of 2016, passed away on 17 August. 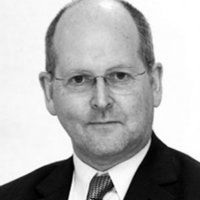 Bell's sudden death, which PRWeek understands was from a blood clot, was on 25 August.

Langford (right) spent 32 years at Burson-Marsteller, first in London and later in Singapore, and was also PRCA chairman for two years. He most recently worked at boutique agency Kissman Langford, which he co-founded in 2002.

Aileen Thompson, director of comms at the Association of the British Pharmaceutical Industry, said: "We have lost one of the great public relations practitioners from our industry - Martin was an inspirational leader, a great boss, respected by clients and staff alike and revelled in his 'master of disaster' moniker. Most of all he was a good man, focused as equally on his family as his career, so a strong role model for us aspiring, determined, young PR professionals."

There will be a thanksgiving service to celebrate Langford's life at St John's Church in Kingsdown, Kent on 5 September at 2pm.

Bell (left) was the founder in 1973 of PR agency The Quentin Bell Organisation, which would later be sold to Chime Communications. He was the PRCA chair between 1994 and 1996, and gradually stepped back from his business from 1990 onwards, writing two books and working as a media commentator.

Jackie Elliot, chair of Cathcart Consulting and PRWeek's Agency Doctor, competed against Bell when she was CEO of MSL in London in the 1990s and then succeeded him as PRCA chair.

She said: "I said in an email to some particularly good old friends: 'His character, leadership and bravery have never been matched and I doubt they ever will be.' Back came one response: '...and he was fun, too.' And he was definitely that - the most enormous fun."

Or Bell, he commented: "This is a very sad day for the PR and communications industry. Quentin Bell will always be an industry legend. He operated at all times with a fantastic love of life, and enormous style. He will be missed enormously."