Last week Flack picked out some fairly stinging criticism of PRs from journalists, contained in the PRWeek/Press Gazette survey on what members of the respective professions think of each other.

Now it’s time for the comms pros to have their turn. PRWeek will be covering the results of the survey in full in a few weeks, but Flack has brought together some insightful titbits from the PRs to whet your appetites.

"For some strange reason, they think they know better than PR professionals and the clients put together," writes one PR pro, summarising the views of many.

Rudeness, arrogance and snobbishness were other unfavourable characteristics highlighted. But this was perhaps the most disturbing. Asked what they dislike the most about journalists, one PR replied: "The ones that want you to sit on their knee (or face). Yeuch!"

The survey closes on Monday (8 August), so you need to be quick to take part – free tickets for the PRWeek Awards are up for grabs as an incentive. Click here to give your views.

Oh what a knight

The decision to give former Downing Street director of comms Craig Oliver a knighthood as part of his former boss David Cameron's 'resignation honours' has caused much discussion, but one person in particular may have more reason than others to feel perturbed.

If ever there was honour in our honours there ain't none now. Embarrassing to be British sometimes

Perhaps a hint of jealousy, Al?

Six weeks on from British voters making the shock choice for the UK to leave the EU, Flack was given a reminder of how dangerous it can be to make assumptions about the political leanings of friends or colleagues.

A senior figure within a WPP-owned PR agency recalled to Flack how he had been asked prior to the vote by a big cheese which way he would be voting. "I'm 'remain', I'm not stupid," the exec answered quick as a flash - only to get something of a sinking feeling as the realisation dawned that the WPP bigwig they were talking to was a Brexiteer.

Sexism in the industry has been on the agenda this week, following the furore around Saatchi & Saatchi chairman Kevin Roberts’ controversial remarks on gender diversity. To recap, Roberts – who later resigned – told the Business Insider that there was no gender diversity issue at his agency, adding that the debate was "fucking over".

Flack was disappointed, then, to read that soft drink brand Sprite had issued some rather disappointing ads in Ireland under the tagline 'Brutally refreshing'. Slogans included: "You’re not popular, you’re easy"; "She’s seen more ceilings than Michelangelo"; and "A 2 at 10 is a 10 at 2!".

Brand owner Coca-Cola later apologised "for any offence caused", saying the campaign was "intended to provide an edgy but humorous take on a range of situations".

As PRWeek’s sister title Campaign has reported, creative duo Sally Leach and Michelle Collins have now created their own take on the Sprite ads with the slogans: "You’re not popular, and you wish you could be easy"; "If ceilings are all she sees, you need Karma Sutra"; "If she’s a 10 at 2... she’s not going home with you."

Flack wonders when the message will get through.

Gary Vaynerchuk, the boss of digital PR agency VaynerMedia, has quite a varied life these days, known as an investor in the likes of Facebook, Twitter and Uber, as well as an author and public speaker in addition to his comms business. But this could be his most eye-opening assignment yet.

Vaynerchuk (pictured right with the equally glamorous Steve Barrett of PRWeek US) is to star alongside Gwyneth Paltrow and Will.i.am in Planet of the Apps, a new TV series co-produced by Propagate and Apple that will see the three serve as mentors and advisers to the app developers selected for the series. Sounds like an explosive mix. 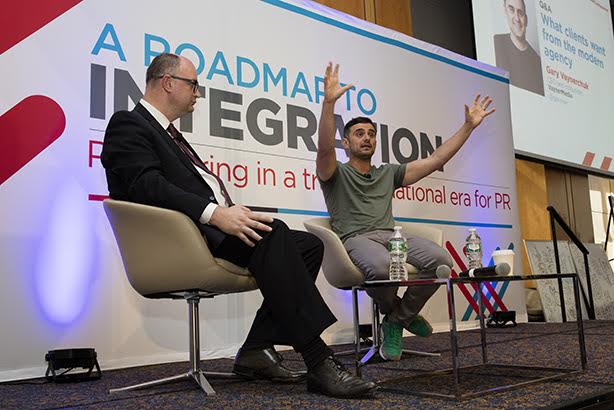