A couple of years ago Louise Evans wrote a piece of careers advice for PRWeek. ‘I didn’t get where I am today by avoiding challenges’ ran the headline.

"Challenging circumstances are the greatest test and proof of the value of eff­ective comms," she wrote. "Our industry involves gaining buy-in for a message and bringing audiences on a journey through open and honest dialogue – skills often best honed during adversity."

Within a year, Evans had taken a spoonful of her own medicine and decamped from media company Dentsu Aegis to Sainsbury’s where, as director of corporate affairs, she can fully indulge her penchant for having her back to the wall.

Right now, though, Evans’ challenge is to find somewhere for us to talk. The room we were in seems to have been double-booked and there is a group of impatient, bearded men hovering outside. Rather than pull rank, Evans leaves and we rove the building looking for a quiet corner to chat.

One of the many ways in which Sainsbury’s is currently trying to make itself more efficient and competitive is by reducing administrative overheads, explains Evans. The company has recently moved to ‘smart working’ with no set desks for anyone – including Evans and Sainsbury’s CEO Mike Coupe. This has freed up three of eight floors at its central London HQ to be sublet. "We are now deskless and paperless," says Evans. "Even Mike (below) doesn’t have a private office." 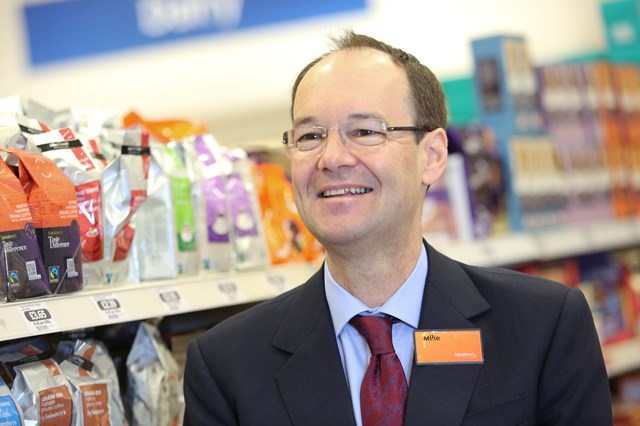 Mind you, it is not all upside. Evans confesses that she has broken her phone four times in the past year alone. "I have to keep carrying it around and I keep dropping it," she explains.

So can anyone sit anywhere in the building? "Yes, in theory, but that would make communicating with the team difficult, so we have a ‘home zone’," says Evans. It is the base for what she calls her corporate affairs "gang", but investor relations and group finance, the finance director, the legal director and Coupe himself all sit there – and marketing is just down the corridor. It means Evans, who reports directly to Coupe, can often do so without leaving her desk. "Mike did this because he recognised the need for all of those advocacy roles to be much more joined up," explains Evans.

Comms at the top table

This may sound trivial. It is certainly strange to think that in such a huge, geographically dispersed business, where you sit can make a difference. But it is all about internal communication and it seems Coupe has put the comms function at the heart of the business, right alongside the steelier management functions.

The old jibe about rearranging deckchairs on the Titanic springs to mind. But if the captain had been sitting next to the helmsman and the lookout, the ship might have never hit the iceberg.

In exactly the same way that Coupe has been reconfiguring his senior management team for improved communication, so Evans has been reconfiguring hers. She says: "Mike recognised the need for these advocacy roles to be joined up and that’s one of the things I am trying to instil. The world has completely changed and long gone are the days where you just reported to the financial media and that was the end of the conversation.

"As you know, the conversation is 360, 24/7 and every audience influences every other audience. I can see a time when they have their own separate audiences but they will be equally at home with others as their own. We need to be set up in such a way that we reflect that."

In the 1970s, the Dutch football team took a very similar approach. The idea was that every player would be comfortable in every position. It was called Total Football. Not being a football bore, Evans blanks the suggestion that this is ‘Total PR’.

In seating and reporting terms, it means Sainsbury’s comms teams, which were previously scattered throughout the organisation, are now all in one place. Evans today runs a fully integrated comms operation numbering 38 souls working in six teams: media relations and consumer comms (split into food and non-food), which were both previously in marketing, as was corporate comms; public affairs (which was in the legal department) and corporate responsibility & sustainability.

"My team is new and it’s a new function. It enc­ourages people to get to know each other because they used to sit in their own gang. They mix and talk about stuff they wouldn’t have. So public aff­airs used to report to the legal director. Now they are in our team. The comms and consumer teams were all together in marketing. So they didn’t really know these guys. Now they do, they ask more questions about what they are doing and so on."

A clear plan of action

Right, so the deckchairs have been nicely arr­anged. What about the slightly more vexed question of navigating the ship past any icebergs?

On the face of it, Sainsbury’s is pretty solid. As the second biggest supermarket in the UK, it is a reassuringly ubiquitous presence around the country, a £23.5bn-a-year business with 1,200 stores and 161,000 employees.

But turnover is down by nine per cent since 2012, the share price is down by 35 per cent since its peak in 2014 (even before the post-EU referendum market decline), and profits have declined by 18 per cent over the same period. The supermarket is beset by competition from discounters, food price deflation, changing consumer behaviour, tech, government legislation and the curse of Engel’s law, which says ‘the wealthier people become, the smaller share of their income they spend on food’.

These are turbulent times. No wonder so many companies currently resemble giants trying to fight off a swarm of wasps, flailing around, not quite sure where the threat is coming from and not quite sure in which direction to run.

Evans moves swiftly into her favoured corporate comms mode to swat aside the suggestion that Sainsbury’s might be flagging. "Yes, historically, grocery share prices were much higher. It’s a reflection of the changing nature of the grocery sector. All we can do is set out our strategy and my job is to deliver against that. We are the only one of the big four to have held our market share."

"The competitive environment is changing," she agrees. "But we have a strategy that recognises consumer behaviour is changing, that they want different things and to be served in different ways with more and different products."

The business strategy is defined in Sainsbury’s annual report as: "We know our customers better than anyone else. We will be there whenever and wherever they need us, offering great products and services at fair prices. Our colleagues make the difference, our values make us different."

They are anodyne words but when unpacked they do suggest Sainsbury’s has a clear plan to deal with change. The first part (we know our customers) is about customer data and insight: "Any business always keeps its eye on the competition. But what we have is data (from 25 million customer transactions a week). We know our customers and understand what they want. In fact, they tell us every week what they want and don’t want. There is consensus around big topics so we have a clear direction of travel." She seems confident this depth and breadth of information means Sainsbury’s is not going to be blindsided by a sudden shift in consumer sentiment or behaviour.

The statement then acknowledges the role of its workforce, the 161,000 ‘colleagues’ who Sainsbury’s sees as a key differentiator. But the most significant section is the phrase ‘whenever and wherever’. It has opened 700 convenience stores in recent years. It is planning a ‘dark store’ in east London to support home delivery, and has a venture with Danish discounter Netto with plans to open 15 stores in northern England.

And just in case you were worried there still are not enough of them, Sainsbury’s is testing microstores of one or two thousand square feet, which can be squeezed into any tertiary shopping par­ade. In the future, it seems there will be no street without its own handily located Sainsbury’s. 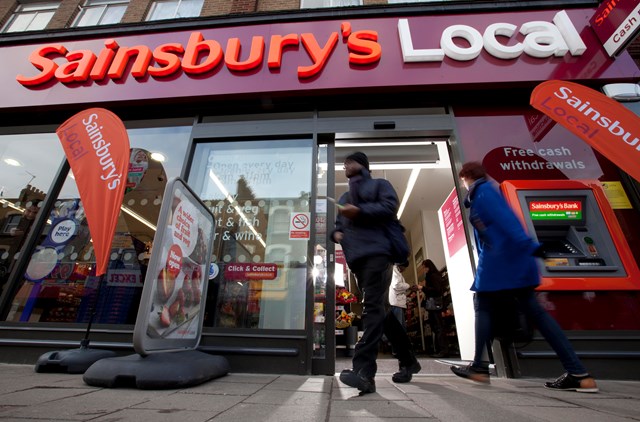 This is because Sainsbury’s says there has been a big shift in the way we shop recently and that we tend to do more top-up shopping. The implication is we are shopping less at the bigger stores and more at the smaller stores. But is the truth that convenience stores are growing at the expense of the traditional corner shop – the Spars and Costcutters – rather than supermarkets?

The big news in ‘whenever and wherever’ and the story that has taken up most of Evans’ time since she joined has been Sainsbury’s £1.4bn acquisition of Home Retail Group, which owns Argos. Sainsbury’s is hoping the deal will be completed by the autumn – if the Competition and Markets Authority does not find it anticompetitive. The fit is obvious: Argos sells £4bn a year of non-food items and has 845 stores. The new group will sell more than 50,000 products from 2,000 stores.

More importantly, Argos also has a best-in-class distribution system that takes the waiting out of wanting for those who cannot be bothered to plan ahead. (It turns out that is most of us these days.) You want an ironing board or some ink cartridges? Argos can meet your need in a matter of hours.

Keeping pace with the competition

It is clearly the way retailing is going and allows Sainsbury’s to respond to Amazon Fresh, the alliance between Amazon and Morrisons that will see Morrisons supply groceries to Amazon customers in the UK, and John Lewis’ use of its Waitrose stores for its click-and-collect service.

Evans says she has a loose brief from Coupe: "I have a job description ‘to run and manage the division, which is corporate affairs’. But it’s up to me to interpret what that means and to interpret the business strategy and how to deploy resources."

To deliver this strategy, Evans says she has set up her department to be "more campaign-based and more proactive". "The teams are structured around the five planks of our strategy. So each person has responsibility for one or two areas and the directors that go with them. The team works together to cover all the different audiences."

The teams then provide what she calls "a drumbeat of activity" – a dozen or so stories a month that demonstrate the important implications of the business strategy. It is all digital-first and obviously there is a comms strategy behind it, although Evans is understandably reluctant to reveal any information about what her strategy might be.

An example of PR supporting the business strategy, she says, is the story that ran in April this year carrying the news that Sainsbury’s is to create 150 new digital and technology jobs in Manchester over the next 18 months as it looks to improve its digital expertise ahead of the Argos acquisition. It will mean the company has more than doubled its digital and tech staff in the past year to 900.

"We have a big digital lab downstairs and we do all our own development of apps, smart shopping, technology in store, changing the ways the checkouts work with handsets and payment over the phone," says Evans. The point was not simply to impart a piece of news but to use it to showcase the fact that Sainsbury’s has a sophisticated digital operation and is busting a gut to stay abreast of tech and the way it affects consumer behaviour.

"Everything I do ladders up to how we tell the story of how we deliver against our strategy and the context in which we operate," she says. "It sounds corny but it’s true: managing the pace of change is both a challenge and an opportunity."