A press release was sent on Monday afternoon, with the subject line 'Quite a few people are upset with Leave.EU for winning the referendum'.

"Following the conclusion of a successful referendum campaign, Leave.EU has upset quite a few people," it continued, going on to say: "Campaign co-chairman Arron Banks would like to extend his heartfelt apologies to the following individuals and organisations."

It said to the Electoral Commission: "Bite me." Leave.EU had threatened to bring a judicial review against the body after it awarded the status of official 'leave' campaign to Vote Leave.

The concise comment "whatever" was delivered to the Information Commissioner's Office – the data and privacy watchdog had fined the group £50,000 for sending unsolicited texts to more than 500,000 people.

To NASA – which had apparently protested that UK astronaut Tim Peake had been misquoted in Leave.EU campaign material – it said: "We quoted the astronaut concerned perfectly accurately, but will apologise if you feel it was 'out of context'. NASA versus Leave.EU would have been quite exciting in court, though..."

To Superdrug – whose founder Peter Goldstein was pro-Brexit – it said: "We quoted your founder accurately, but did use your logo without permission. Sorry about that!"

To Gary Lineker and Victoria Beckham – the former has expressed frustration at the vote's result and the latter at the campaign's use of a previous quote of hers (see below) - it sent the message: "Bring it on, luvvies."

Leave.EU head of comms Andy Wigmore told PRWeek in a text message: "We have learned that magnanimity in victory is the best option – and u can quote me." 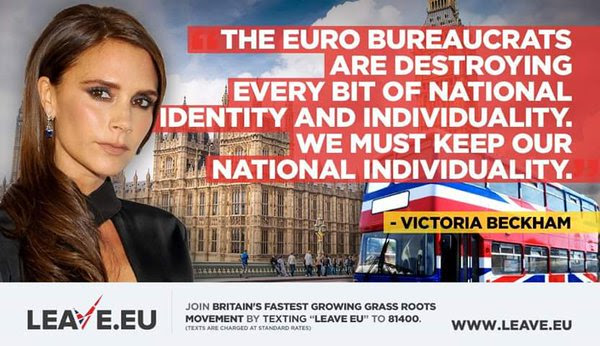