This month, business news is dominated by Tata Steel; the story, noticed by 41 per cent of British adults, has remained the most significant business story for four weeks. 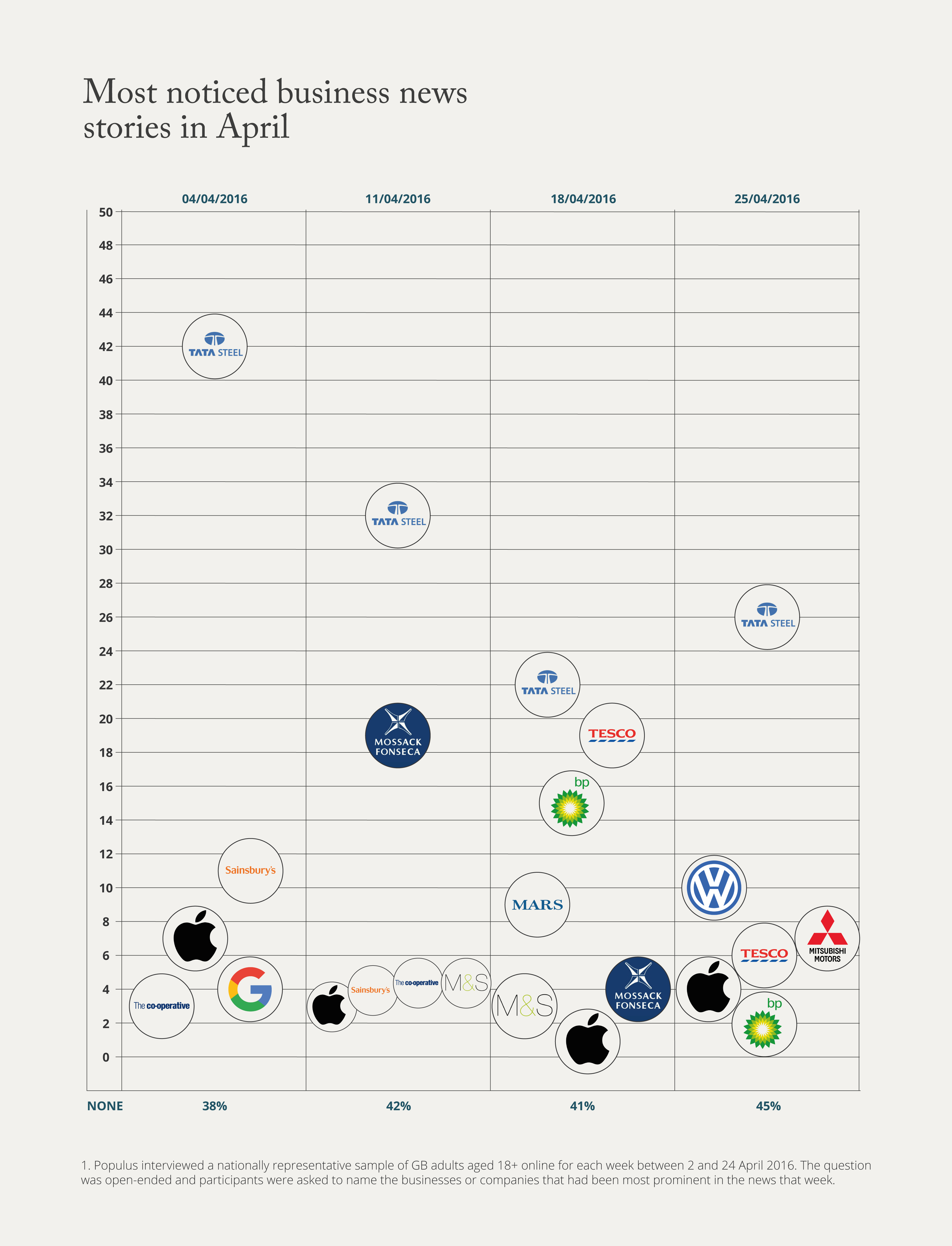 The death of steel?

At the beginning of April, Tata announced plans to sell its UK steel business including the Port Talbot steelworks, which is losing £1m per day. If a buyer cannot be found by the end of May the Indian conglomerate says that it will close all of its UK Steel operations.

The story touches a nerve, because shutting the blast furnaces at Port Talbot would effectively mark the death knell of the British steel industry.

Emotions are running high, particularly in Port Talbot and surrounding regions, because the prosperity of the local economy is so intimately bound to the fortunes of the plant. Research from the Institute of Public Policy Research (IPPR) warns that the collapse of Tata’s UK Steel business, which employs 15,000 people directly and supports at least 25,000 more jobs, could leave the Government facing a £4.6bn bill in lost VAT receipts, income taxes and benefits payments to unemployed steel workers.

Many feel betrayed by the Government and the EU. Unlike the US, which slapped a 266 per cent tariff on Chinese steel products to protect its steel industry, the EU has not imposed protective tariffs. Compared to Germany, whose electricity prices are only half those of the UK, the British Government has done little to shield energy intensive industries from high energy prices.

Rising anger over the UK Steel crisis, particularly in Wales, is beginning to impact on EU referendum polling. Since the beginning of the year, when Tata mooted that it was considering the future of its UK Steel operations, Wales has moved from broadly in favour of remaining in the EU to backing Brexit.

The Government has been on the back foot since Business Secretary, Sajid Javid, was forced to cut short a family holiday to address the fury over Tata’s announcement. It has agreed to sweeten a deal to prevent the closure of Tata’s UK Steel operations by taking a 25 per cent stake in any credible rescue package.

While Port Talbot and other communities linked to the steel industry hope desperately that partial nationalisation will flush out a ‘white knight’, the challenge is daunting. Any purchaser would have to fund the £2bn hole in the pension scheme and be able to sustain steel production during a period of plunging global steel prices. Neither Liberty nor Greybull Capital, which have expressed interest in parts of the Port Talbot plant, nor Stuart Wilkie’s proposed management buyout have deep enough pockets to take on these financial risks. Furthermore, the prospects of a credible buyer stepping forward during the current period of global economic uncertainty is unlikely.

If a buyer cannot be found, the Government must accept the reputational damage associated with failing to protect this strategically important industry. Blaming the uncompetitiveness of British steel production on uncontrollable global economic trends or on chronic under-investment from previous governments will count for little. To salvage any reputational capital from the demise of the steel industry, the Government must demonstrate how it is supporting the communities that are most seriously affected through re-skilling and new enterprise funding.

According to the IPPR, 23 years after the final collapse of the UK coal industry in 1993, unemployment levels in many pit towns have recovered to only 60 per cent of that achieved when the pits were open. Allowing the same thing to happen to Britain’s steel towns would be unforgivable. 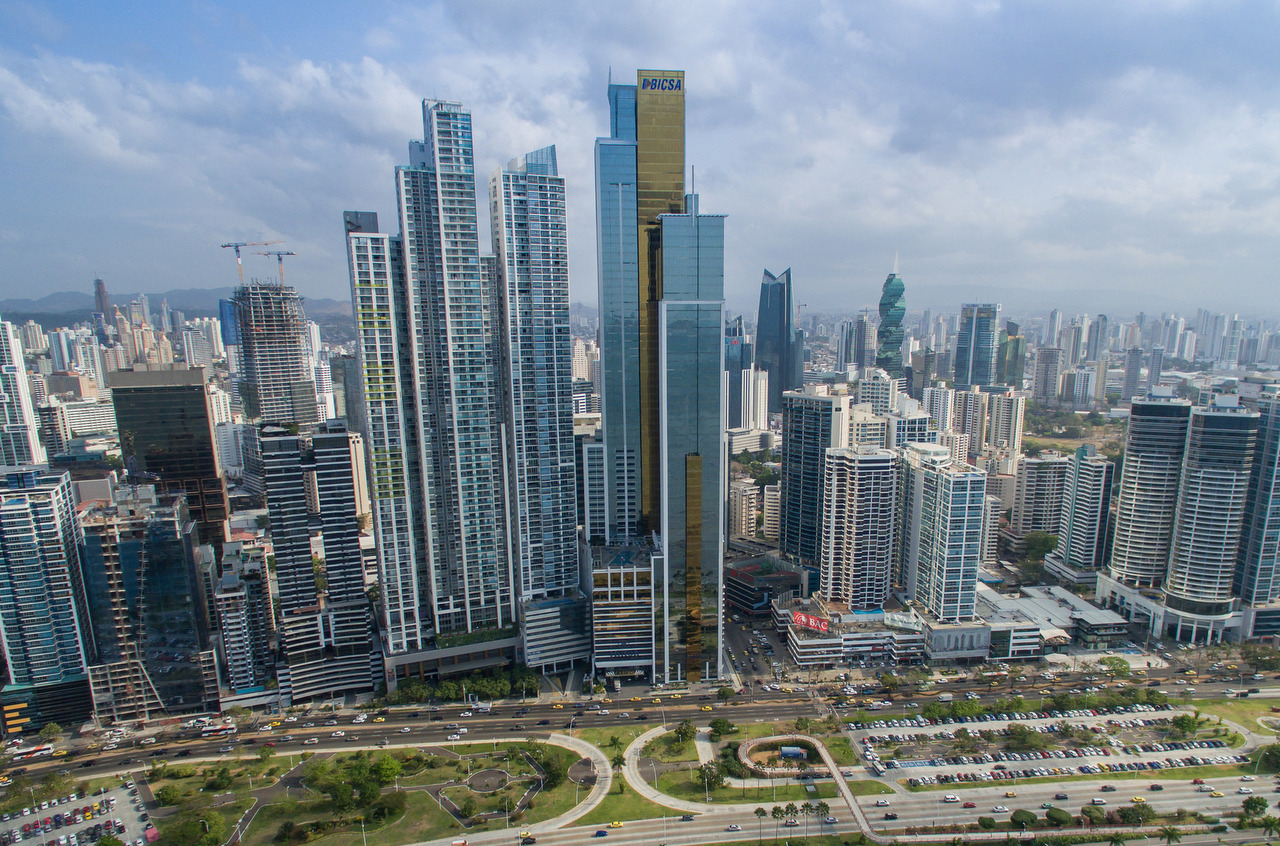 A little know Panamanian law firm, Mossack Fonseca, is the second biggest news story this month, noticed by 19 per cent of British adults. It follows the leak of 11.5m confidential documents including shareholder registers, bank statements, emails from lawyers and accountants, passport scans and contracts related to offshore accounts. The leak, known as the Panama Papers, revealed the involvement of heads of state, aristocrats, celebrities, arms smugglers, drug dealers, despots and the super-rich in the secretive world of offshore businesses. These are legal, but often associated with money laundering, sanction busting, tax evasion and aggressive tax avoidance.

The sums of money involved are vast. According to the US economist Gabriel Zucman, 8 per cent of the world’s wealth is stashed in offshore accounts where tax rates are very low or zero. He estimates that the resulting loss in global tax revenues is $200bn.

The publication of the Panama Papers has put many, particularly Americans and Europeans, under scrutiny for their involvement with off-shore vehicles. The disclosure toppled the Icelandic Prime Minister and lead to calls for David Cameron to resign over links to his late father’s off-shore fund, Blairmore Holdings Inc.

Mossack Fonseca’s leak is changing the political and public mood towards offshore tax structures, because it has laid bare how legal tax structures are open to abuses which allow people and companies to avoid tax.

In recent weeks political leaders have ramped up the rhetoric on aggressive tax avoidance by individuals and companies. The Prime Minister has promised to end ‘tax secrecy’ in the UK and has described some offshore schemes that allow people to minimise their taxes as "not morally acceptable." In the US, President Obama called tax avoidance a ‘massive global issue’ which means that less money is invested in addressing the ‘pressing needs’ of citizens. He goes on to explain that "a lot of it [offshore tax structures] is legal. But that’s part of the problem. These corporations have enough lawyers and enough accountants to wiggle out of rules that normal citizens abide by."

In this heated environment, large corporates should expect even more intense scrutiny of their tax affairs and more regulation. They should prepare for higher tax expenditure and plan to communicate to a sceptical public on what constitutes the ‘right amount of tax’ for multi-nationals to pay in different jurisdictions. The answer to this question poses many reputational risks in a world where the tax that companies pay is becoming less a matter of legal obligation and more a matter of moral responsibility and justification."

"Industrial Plumbing" by Clint Budd is licensed under CC BY 2.0

"Panama Papers" by dronepicr is licensed under CC BY 2.0