News
Tweet
Share
Khan garnered 41 per cent of the Twitter mentions, well ahead of his nearest rival, Conservative candidate Zac Goldsmith, who accounted for 32 per cent of the conversation.

The often controversial George Galloway, who is also standing for Mayor, took 11 per cent of the conversation while Green Party candidate Sian Berry was on seven per cent and the Lib Dems' Caroline Pidgeon was on five per cent.

Brandwatch tracked 26,000 tweets about the London elections in the week to 10 April to arrive at its conclusions.

Khan’s high point last week came on Thursday in an #AskSadiq Twitter chat while Goldsmith enjoyed a boost on Friday in a similar Twitter chat. 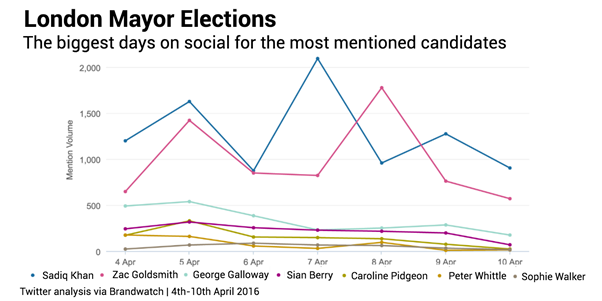 Of the tracked tweets, transport and housing were the top issues mentioned by Twitter users, with 1,741 and 1,721 tweets respectively. 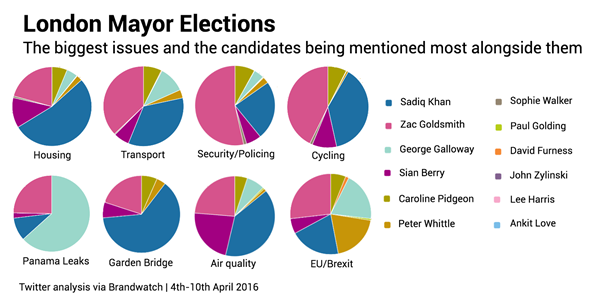 The Panama Papers, the proposed Garden Bridge, air quality and the EU were also top topics.

For male Twitter users the main issues were transport, housing and security in that order, while for women it was housing, followed by transport and security.

At a heated hustings event last night at the Institute of Directors building in Pall Mall, Khan and Goldsmith clashed repeatedly over issues of housing, security and business.

Khan was keen to portray himself as a strong supporter of business and told the audience he would be "the most pro-business Mayor London has ever had." He also spoke of the need to "skill up Londoners" for the demands of modern business.

Goldsmith was in aggressive mode, attacking his rival from the outset for his alleged links to Islamic extremists, his "fantasy policy" for housing, and said Khan’s plan to freeze public transport fares for four years would leave a £1.9bn black hole in the Mayor’s coffers – a claim vigorously denied by Khan.

A telling insight into the candidates’ mutual animosity came when an audience member asked them which qualities they admired in their rival.

Khan said Goldsmith was "charming", but suggested his positive qualities had been undermined by the Conservative campaign machine. Goldsmith’s praise for Khan was limited to calling him a "gritty campaigner".
Tweet
Share