London-based Cicero said the action was "a mistake by a junior member of staff".

The ads meant the first results that appeared when someone Googled Edelman, Brunswick, Bell Pottinger or Blue Rubicon were disparaging about that agency, and pointed users towards Cicero.

For example, if someone Googled 'Brunswick', the first result contained the headline 'Brunswick not cutting it?' and had a link to Cicero’s website. 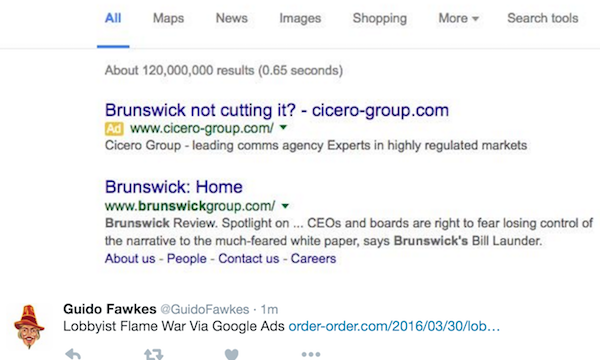 Other examples included: 'Bell Pottinger but better', 'Better than Blue Rubicon' and 'Unhappy with Edelman?'. All the search results were marked as Google ads.

Andrew Hickley, head of marketing and content at Cicero Group, told PRWeek: "This was a mistake by a junior member of staff. The ads were stopped immediately once they came to the attention of senior management. This is not the Cicero approach and we apologise."

The incident became a talking point on the Guido Fawkes website yesterday, with some readers using it to criticise the industry. One labelled the tactic "digraceful (sic), duplicitous and underhand", and another said: "Lobbyists should be in prison."

However, others were less concerned. One post read simply: "Slow news day?"

Meanwhile, the major PR firms 'targeted' are keeping quiet on the issue. Bell Pottinger and Brunswick declined to comment when approached by PRWeek. PRWeek also contacted Edelman and Blue Rubicon but did not receive a response at the time of publication.