ST. LOUIS: Ascension Health launched its first advertising campaign on Monday, touting its partnership with the Department of Veterans Affairs.

The organization worked with FleishmanHillard and GSD&M on the national campaign, which promotes its partnership on the Department of Veterans Affairs’ Veterans Choice program.

"We want to educate veterans that this program exists; a lot of them don’t know there’s a government program for them," said Nick Ragone, chief marketing and communications officer of Ascension. "We want to let them know that it’s our mission to take care of people who have been forgotten a little bit, as veterans are often overlooked."

Ascension placed print ads in military publications and daily newspapers, and it is also using Google advertising and testing a targeted Facebook ad, he added. The organization also created a dedicated landing page and phone number to help veterans easily navigate the system. 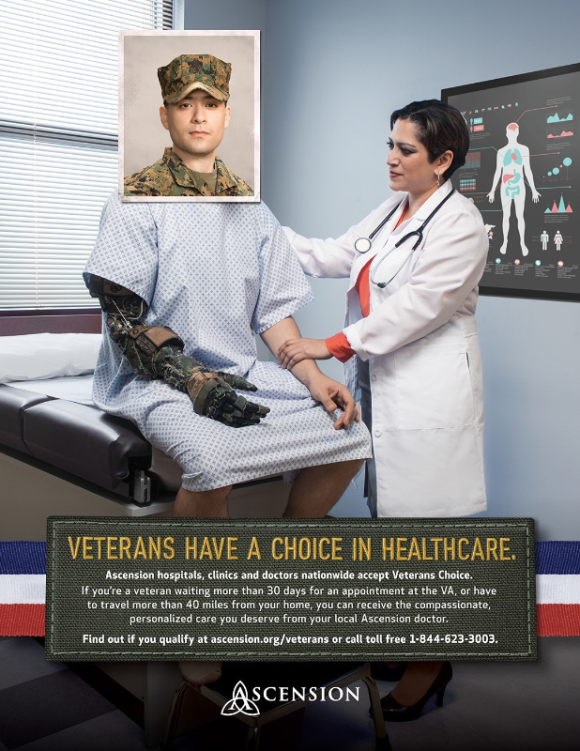 Ascension partnered with GSD&M in Austin, Texas, to develop the 60-second TV spot, which includes real veterans and Ascension doctors.

"It’s a really moving spot," said Ragone. "It talks about the oath our veterans take to protect the country and the oath that doctors take to treat the sick."

The partnership between Ascension and the VA is expanding the federal department’s medical system to veterans who meet certain requirements but cannot easily get to a VA facility. Ascension is adding 2,000 sites where veterans can receive care. The Catholic healthcare organization worked with the VA for 18 months to create the partnership.

"It’s been a fantastic collaboration with the VA," said Ragone. "I think the VA is trying to reach more veterans, and [the VA] realized they should partner with private companies."