Flack was at a Portland event on Thursday evening where everybody's favourite spin doctor, an adviser to the comms firm and PRWeek Power Book member, Alastair Campbell was on jovial form, beginning his speech with an apology: "I always feel when I’m in a room full of communicators that I should apologise, because all of you at some point in your career will be called a spin doctor, and that is probably partly down to me – but no matter how badly you get it, you never get it as badly as me."

He also found time to tease his boss and old New Labour colleague, Portland CEO Tim Allan. Harking back to the media landscape of his childhood, he said: "The media meant a daily paper that you took because that’s what your parents took, a local weekly and a magazine that in my case would have been about football, and in Tim’s case would have been about, I don’t know, something about how to make money, or golf, or something rich people do."

Campbell also started another anecdote by talking about heading off to the football. "I was getting on the train to see my football team Burnley win yet again – it’s getting really boring, we’re winning every game and we’re probably going up," he enthused. Surely Campbell of all people should know about the dangers of getting cocky after a few impressive victories.

Campbell also told the audience that it was no longer possible to control the news agenda in the same way as he did in his time Government.

Although it didn't come up in Campbell's speech, the EU referendum was on many people's lips as the Portland party got into full swing. In a week where the personal views of individuals in business groups – and the apparent opinion of Her Britannic Majesty – came under scrutiny, one attendee at a business membership body said he would be "amazed if we get through this without a bloody nose". Good luck.

Separately, one well-known brand has been keeping well away from any of that argy-bargy. "We are not allowed under any circumstances to have any opinions on the matter," the comms chief at this consumer household name told Flack earlier this week. Well, at least there's no room for ambiguity there.

Boris Johnson just can't get away from PRs it seems – this week Dynamo PR co-founder Peter Bowles told Flack he had spent the past few weeks dodging the paparazzi near his home in Islington, north London. Wondering what all the fuss was about, he finally realised that Johnson lives right around the corner from his flat and was spending gruelling days making his mind up on Europe.

Having got married in Poland, it’s fair to say Peter is pro-EU. "I was a bit surprised to see New York-born and Brussels-educated Boris supporting Brexit. As someone representing millions of EU residents in a cosmopolitan city like London, it seems a surprising decision for him to take," he said.

Bowles is thinking of setting up a #PR4EU campaign. Anyone with him? For each tweet he promises to personally spit at the original Boris bike each day on his way to work, although he assures us that that last bit is just a joke.

After the Government seemingly announced a clampdown on the use of the exclamation mark on Tuesday (not quite, but that's what the nationals would have you believe), the agency Bottle decided it was time to take stock of the PR industry's use of this zany punctuation mark.

Using client Brandwatch to analyse the recent tweets from a total of 87 agencies that had recently won awards, Bottle found an industry average of 0.4 exclamation marks per tweet, with Bottle itself managing an above average 0.6!/tweet. But the winner, with 1!/tweet, was... Tin Man Communications!

Tin Man MD Mandy Sharp wrote: "Love this!!!!!!!!!!!! We are definitely an excitable bunch at Tin Man so I'm not surprised at all we came top here. Pleased and proud that our passion comes across in our tweets and we do love an award so we'll add this one to our trophy cabinet. Thanks Bottle."

Bottle MD Natasha Hill cautioned, however: "Our industry reputation for hyperbole and superlatives is borne out with the overuse of exclamations. Some serial offenders add up to five exclamation marks – and there is danger of a grammatical ‘arms race’ to try to outdo your competitors' hysteria." 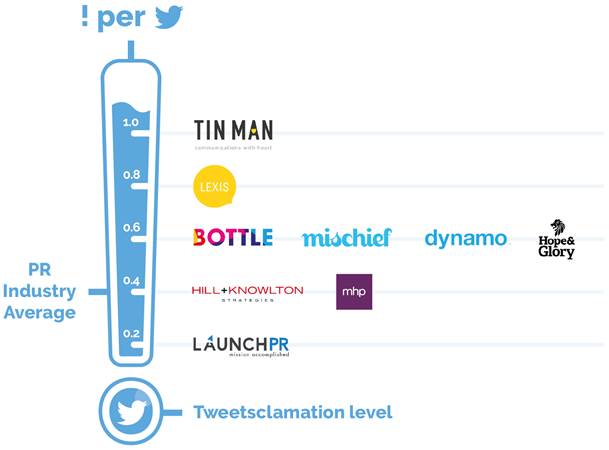