Indian prime minister Narendra Modi leads the way for Asian world leaders actively using Instagram to communicate with their people, according to Burson-Marsteller’s second instalment of its Twiplomacy report.

The World Leaders on Instagram study found that 136 of the 193 United Nations members are on the image-based social network.

However, of the 305 accounts Burson-Marsteller analysed, it found that around a third were inactive.

"While Instagram is a newer medium for world leaders compared to Facebook or Twitter, its emphasis on visual communications makes it a powerful channel for connecting with citizens," said Donald Baer, Burson-Marsteller worldwide chair and CEO.

"Corporations, NGOs and other sectors can learn a great deal from the ways governments are using Instagram to build stronger relationships."

President Barack Obama is the most popular world leader on Instagram with 6 million followers. Next is Russian prime minister Dmitry Medvedev with 2 million followers, and then Modi with 1.7 million. 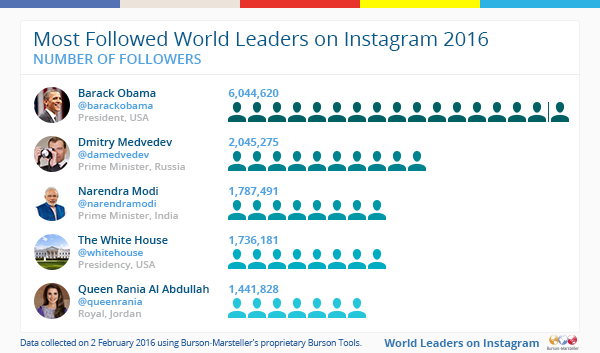 Obama is also the most interactive on Instagram, with more than 56,000 comments and likes for every post.

However, despite having less than a third the number of followers, Modi is in close second, with 42,000 interactions per post. What’s more, he has only posted 37 images since joining Instagram in November 2014.

The report also found that just 15 Instagram accounts are managed by the world leaders themselves.

Of those that do, Singapore prime minister Lee Hsien Loong is perhaps the most well-known because of his more than 40 group selfies taken often with members of the public in ordinary surroundings.

Jeremy Galbraith, CEO for Europe, Middle East & Africa and global chief strategy officer at Burson-Marsteller, said the study illustrates that governments are ready to communicate across all the key social media platforms.

"Each platform has its individual unique selling proposition, but it’s clear from our study that Instagram can open up new channels as well as reinforce information conveyed through other networks in a more visual and appealing way," he said.

"Creativity and the use of image is critical for communicating with impact today, and clearly world leaders know this."