Former Publicis Greater China CEO Jeffrey Yu has nailed his colours firmly to the PR mast during his opening days as Edelman China’s CEO, insisting the industry is far less resistant to change than advertising.

"I realise that PR people are much stronger in communication management because they are close to clients and have to develop all their messaging," he said.

"There is a big opportunity for me to harness the strengths of these people and turn them into a bigger force."

Yu, who was also former chairman of Bates Asia, said it was more difficult to drive change in an ad firm than a PR agency.

"If you ask an elephant to dance, it’s very, very difficult," he said.

"In advertising, I was dragging reluctant people up the hill who were resisting and screaming that they don’t want change.

"Here, everybody is asking, how do I get on board? It’s not as if I’m now in foreign territory, it’s just that I have learnt three new [PR industry] words: evolve, promote and protect."

Yu resigned from Publicis following a complete restructuring of its Greater China operations and the conclusion of the Betterway scandal, which was settled in September 2013.

More than a year later, he decided to take the Edelman China CEO role after becoming acquainted with the firm’s executive vice-chairman for Asia-Pacific, Middle East and Africa Carol Potter.

Yu said Edelman’s difficulties with its previous CEO Steven Cao were not an obstacle to him joining the agency.

Cao was detained for several months in July 2014 by Chinese security services as part of an anti-corruption probe regarding services the agency provided to a Chinese television station in Davos in 2009 and 2010.

He was released in October 2014 and remains on administrative leave.

"I never shy away from challenges — it’s not my style. But I’ve not come into Edelman to solve a problem," he said. "The agency wants to use my extensive creative management experience to take them forward. My skillset is in communicating and promoting a brand."

Yu’s handover was conducted by Bob Grove, Edelman’s North Asia CEO, and Sanjay Nair, Beijing MD. He emphasised that Edelman in China was not an agency in dire need of rescue. 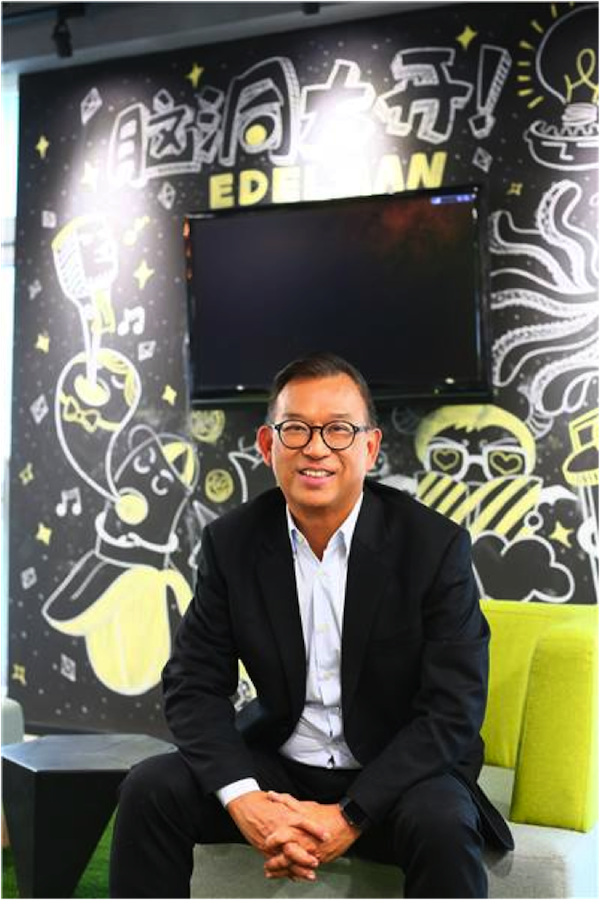 Yu said he could not reveal any specific business targets for 2016, but said he will be responsible for the agency’s transformation: to ‘farm’ – sell more Edelman disciplines to clients – and ‘hunt’ – look for new business streams.

He added he had always seen himself as more of a communications person than a purely advertising person, and that it may have taken more than 20 years to find his true calling.

"It’s interesting, as one of my first jobs was at Burson-Marsteller when I graduated from college," he said.

"At that time, PR was very limiting; it was about counting the number of press articles you could get. My role for 11 months was making presentation slides using film."

Given his significant experience in advertising, however, Yu is meant to be an agent of change to take Edelman to another level in China.

He said the agency would be focusing on more communications disciplines, data and social CRM.

"All our Edelman surveys are excellent input for planners whom we have started to recruit from the advertising world," he added.

"Currently, the individual Edelman practices are very good, but they need someone to gel them. My job is to lock all of them in one room, starve them until they work together!" Yu joked.

"But seriously, everyone wants to change. I like to keep my kitchen very hot and keep all the chefs and dishwashers busy. If the kitchen is not hot, everybody will get lazy."

This maintenance of a "hot kitchen" means instilling a common vision among the 320 employees in Edelman China, he explained.

In younger markets like China, the role of PR professionals in promoting their clients used to be based on one-way messaging, but now it should be about storytelling, Yu stated.

Finding the human side of a brand, presenting it in multiple interactive aspects and listening to reactions, whether on earned or paid media.

"In advertising, I cannot be interactive with consumers because I have to go back and shoot another 30-second TV commercial," he explained.

Given the explosion of social media across the mainland, Chinese millennials are less trusting than older generations, Yu said, referring to findings from Edelman's long-running Trust Barometer.

The PR implications are to use a different engagement strategy for millennials instead of putting too much weight on traditional media platforms, he advised.

The Barometer opens up a lot of opportunities for Edelman to talk to Chinese clients about the lack of trust in them both domestically as well as overseas.

"In particular, family-owned brands in China are believed to be selfish and serving their own interests, but if we convince the business owner(s) to fix their misplaced priorities, the big trust gap can be closed," he said.

That said, Chinese clients operate on more of a blank slate, according to Yu, since they have less baggage than in the West of working with a certain agency for their communications needs.

Furthermore, Chinese consumers are now more interested in the brand experience rather than the messaging.

To address this trend, Yu wants to expand the remit of Edelman's one-year-old experiential marketing practice, a legacy business unit from Pegasus Communications.

"It has traditionally been auto-focused, but I want to reduce the dependency on auto clients," he said.

When asked about new tools of consumer engagement or experiential PR, Yu said he is keeping them secret for now.

"I should not be boasting about something prematurely. This is my fifth day at work!"