here is excitable talk in the media about the Pope these days. People speak of a PR revolution in the Vatican. Some describe it as a transformation and point to Pope Francis’ buoyant poll figures and hagiographic press notices.

Seemingly buttressing the hyperbole are the changes being made to the Vatican’s media operation, though the word ‘operation’ – suggestive of clinical, tactical methods – can be misleading when applied to the Vatican’s comms and PR track record.

To give an idea of what a sprawling, disorganised mess it is, consider it is currently spread across no fewer than nine separate offices: the Pontifical Council for Social Communications; the Vatican press office; the Vatican Internet office; Vatican Radio; the Vatican television production studio, CTV; the Vatican newspaper, L’Osservatore Romano; the Vatican printing press; the Vatican photograph service and the Vatican publishing house, Libreria Editrice Vaticana.

In the words of Russell Shaw, former director of the United States Conference of Catholic Bishops, "Vatican communications border on chaotic".

The chaos and disorder of Vatican comms reached its nadir towards the end of Pope Benedict’s pontificate, which seemed marked by a never-ending avalanche of bad stories and hostile commentary.

Sharp eyes could pick out the false claims about the Church and Pope that sneaked their way into coverage, but these also begged their own questions about the Vatican’s comms. Why were Vatican press officers not all over these stories, contacting editors and demanding corrections?

"One reason is that there weren’t enough people to do the work, even if it had occurred to them to do it," Shaw explains.

"Those whose job descriptions might have included doing it numbered exactly two – the director and the assistant director of the Sala Stampa [Vatican press office]. The Sala Stampa undertook to do the job once in a while – metaphorically speaking, when something particularly outrageous was tossed over the Vatican wall – but otherwise it couldn’t have hoped to keep up with all the nasty things being said by many people in many countries. To do it adequately, you would have needed small offices for the purpose not only in Rome but in Berlin, Paris, London, New York, Los Angeles and other places."

Lack of resources combined with the de facto decentralisation of the Church made it impossible for the Vatican to mount any such effort, Shaw says. At the national level bishops’ conferences often lacked money and trained personnel, as well as stomach for the fight, he adds.

Everyone knew it could not go on like this. So in July 2014 Lord Patten, former chairman of the BBC Trust, who steered Pope Benedict’s visit to the UK in 2010, was brought in to chair a committee reviewing the Holy See’s media operation and propose reforms. The objectives were: "To adapt the Holy See media to changing media consumption trends, enhance co-ordination and achieve, progressively and sensitively, substantial financial savings."

He recommended a first obvious step: amalgamating media services into one unified structure of governance and management. This would be accountable to an external board of representatives of the secretariats of state and of the economy, episcopal conferences, Catholic media organisations and individual media experts. It would oversee the work of five different departments: a pastoral department, an administrative department, a commercial department, a technology department and a media operations department. The latter would lead the restructuring of the Holy See’s core media activities, taking responsibility for media relations, content production and dissemination.

In his World Communications Day lecture last May, Patten elaborated: "Media relations would involve the strengthening of the press office, so that it would be the central point of contact for all external media and would be involved in the distribution of official statements, the organisation of press conferences, the accreditation of media and the evaluation of media projects, the planning of the management of major media events and the training of authorised and specialised spokespeople.

"The press office would need to be able to offer its service in an adequate range of languages and operate in accordance with international news cycles."

Patten also stressed that "the process of bringing together the different entities would require time".

Four years has been allotted to the comms overhaul and progress thus far has been modest. For all the talk about international news cycles, the press office still shuts every day at 3pm GMT and internal comms appear to vary between chaotic and non-existent. "Even Father Lombardi, a very competent and conscientious professional, acknowledges that he often doesn’t know what’s going on," comments Shaw. (See 'An audience with the Pope's PR man, Father Federico Lombardi). 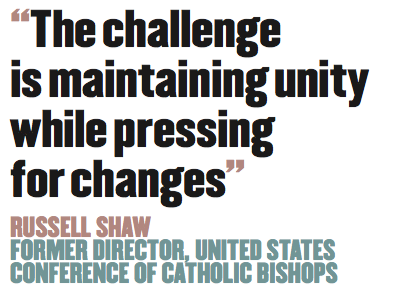 On the audit side of the balance sheet, a secretariat of comms has been established and just before Christmas came the announcement that some key figures on the Vatican media chessboard were being moved around.

Greg Burke, former Fox News journalist and latterly a gatekeeping senior comms adviser at the Secretariat of State, where he was in charge of the Holy See’s media strategy, has been appointed deputy director of the Holy See press office, replacing Father Ciro Benedettini.

The speculation is that Burke, who in his role at the Secretariat of State helped launch the papal Twitter account in 2012, will eventually replace 73-year-old Father Federico Lombardi as director of the press office.

Shaw says while Francis himself is a charismatic, gifted communicator, who has introduced his own innovation in the form of mid-air press conferences, this hardly qualifies as a PR revolution. "This pontificate is not a PR revolution if by ‘revolution’ you mean something institutional and systemic. Nothing like that has happened, and the reorganisation of Vatican communication entities now under way is hardly revolutionary. The reorganisation now under way may help, but that isn’t visible yet."

How then to explain the marked difference in the press treatment accorded to Francis compared with that of his predecessor? The answer goes to the heart of the importance of reputation.

"Pope Benedict came to the papacy after two-plus decades, during which he had been systematically savaged by his enemies in the Church," Shaw notes. "In contrast, Francis came to the papacy virtually unknown but with a built-in corps of supporters, many thought not all members of the Jesuit order who were happy to busy themselves on his behalf."

The Vatican PR transformation, then, hinges on the persona of the Pope – in the words of Lord Patten, "a mixture of grace and authority… unencumbered by a distant formality or ecclesiastical pomposity".

There is however a sting in the tail. A not insignificant PR and comms challenge is fast approaching in the form of Francis’ Apostolic Exhortation (post-Synod report) on the subject of the family. Depending on whether and to what --extent he departs from Catholic doctrine, strains in the Church could sharpen into cracks. Effective communications are much more challenging if an organisation is in crisis.

"The biggest challenge is maintaining the unity of the Church while pressing for controversial changes," Shaw says. "The synod last October appeared to be teetering on the brink of an ugly split, and if that situation persists and spreads the pontificate and the Church could have a serious crisis on their hands."

The Vatican declined to comment when contacted by PRWeek.