The Las Vegas Strip is famous for larger-than-life entrepreneurs such as Steve Wynn and Donald Trump. But for much of the last 12 years, Caesars Entertainment – whose casino-resorts on the Strip include Caesars, Paris, and Bally’s – was led by former Harvard professor Gary Loveman, before he left as CEO in 2015. He is widely credited for some of the brand’s smartest moves. Under his leadership, the company created its now 46 million-member loyalty program, Total Rewards. It also launched Caesars Interactive, an online, mobile, and social gaming division, which also houses the World Series of Poker tournament.

Much has been made over Loveman’s academic background in publications such as Fortune and The New York Times. But the fact is some of Caesars’ (formerly Harrah’s) most influential execs have come from other fields, such as academia and data analytics, which explains why the company was the first with a loyalty initiative. In the case of the company’s longtime head of comms? She is Sin City’s former mayor, and, before that, worked in automotive and retail.

"At the start, we were all outsiders," says Jan Jones Blackhurst, EVP of communications, government relations, and corporate responsibility. "We had to learn about gaming. We didn’t grow up in it like so many on the Strip."

Rolling the dice
The city’s first female mayor from 1991 to 1999, Jones Blackhurst says she had finished her second term when she was approached by Phil Satre, who at the time was president and CEO at Harrah’s.

"I had just decided not to run again for mayor when I met with Phil. He and I had gone to Stanford together," she recalls. "He told me, ‘I am creating this new position, which will oversee corporate comms, government relations, and corporate citizenship.’"

"And he said, ‘The position will report directly to me,’" notes Jones Blackhurst. "The way Phil structured the job was very forward-thinking. He was one of the few CEOs who at the time recognized the importance of corporate positioning to different stakeholders."

It proved a pivotal decision. Harrah’s purchased Caesars Entertainment in 2005, creating a $9 billion gaming and hospitality conglomerate, at the time the largest in the gaming industry. Today, the company operates 49 casinos in 14 states and five countries, primarily under the brands Caesars, Harrah’s, and Horseshoe. As the company has grown, it has faced many challenges, from efforts to legalize online gambling to the company’s recent bankruptcy filing.

Through it all, Jones Blackhurst says she has tried to handle it all with a laser-eye focus on doing what’s right.

She still directly reports to the CEO. Today, that is Mark Frissora, who spent seven years with automobile rental company Hertz. He assumed the role from Loveman, who remains chairman, last July.

Reporting to Jones Blackhurst are four key executives. Two focus on government relations, a third has the diversity file, and a fourth oversees sustainability and community affairs. In total, the comms department has a 20-person staff. It also occasionally works with PR firms such as The Siren Agency.

But the department was about twice that size leading up to 2008, when Harrah’s took the Caesars name and went private in a $30.7 billion transaction led by two private equity firms.

"When we were taken over by private equity, that is right about when the economy crashed. People for the first time discovered the gaming industry wasn’t immune to financial fluctuations," recalls Jones Blackhurst of the job cuts that followed. "We learned to operate differently and be more nimble, so that we could still maintain many of our programs."

High stakes
In January 2015, Caesars Entertainment Operating Co. – the division that runs most of Caesars’ casino-hotel properties worldwide – filed for bankruptcy protection. The Chapter 11 restructuring was aimed at eliminating $10 billion of debt and improving the company’s capital structure.

"We’ve had communications going on many different levels," says Jones Blackhurst. "We’ve said to our consumers, ‘It’s business as usual, nothing will be disrupted at our properties.’"
Employee comms have been more complicated. In a video message posted online at the time of the announcement, Loveman said that staff would continue to receive pay and benefits as usual.

"But we’ve had to be a little more continuous in our messaging with employees because they are a little closer to the restructuring," she explains. "Now it is about giving them a vision of what the company will look like when it comes out of the restructuring. We want them to understand why it is good for the enterprise and, consequently, good for them."

Caesars Entertainment Operating Co. hopes to split into two – a property company, which will own 28 of the company’s properties and a separate operating unit to service these properties. A group of CEOC’s current creditors will own the equity in the property company. The comms department may have gotten leaner, but Jones Blackhurst says, "I’ve tried to protect the budget for the Caesars Foundation, CSR, and diversity."

Forty-one percent of the organization’s management roles are filled by women and 57% of staffers represent minority groups. The foundation also funds philanthropic programs of $5,000 or more in communities. 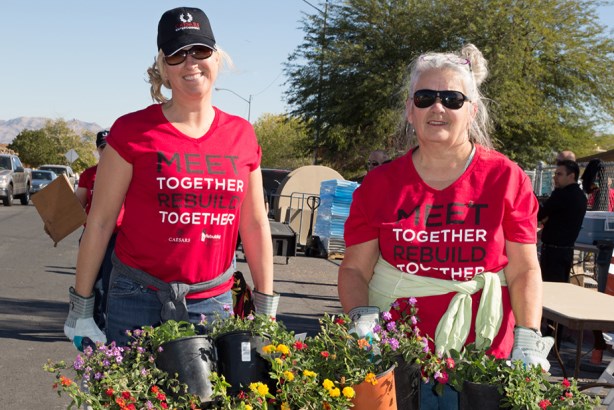 The company has built a big part of its CSR around responsible gaming programs. Project 21 educates its workforce on preventing underage gambling, while Operation Bet Smart provides training on responsible gaming. As part of the latter, the company appoints responsible gaming ambassadors who are taught to recognize the signs of pathological gambling and how to help those individuals.

Contending its responsible gaming initiatives are more mature than the rest of the industry, Jones Blackhurst says that’s because she led a code of conduct when she first joined the organization. It listed responsible gaming as its first commitment to customers.

"The lawyers tried to kill it when we first proposed it. They said, ‘You can’t set this kind of standard.’ The rest of the industry wasn’t happy either. But I believed there was no question responsible gaming had to be the major driver of the code. Thankfully, I had the support of the CEOs, starting with Phil and then Gary, who agreed this is the right thing to do," she says. "Now there is a code for the entire industry to model their behavior after, but it’s still not at our standard."

"Our code is really at the core of who we are as an organization," she continues. Caesars has to behave in a way that reflects its values if it’s to be successful on a number of fronts, she says, including talent recruitment and retention.

"We want to hire smart people from different sectors," Jones Blackhurst notes. "But when it comes to gaming, there will always be some people with the concern, ‘Is this a predatory industry? Does this company conduct itself at the highest level of integrity?’"

"What you stand for becomes a key differentiator in making someone comfortable considering you as a long-term employer," she adds.

Its corporate reputation has also been key for expansion into new markets and revenue streams. Caesars operates a number of casino-resort properties in Atlantic City, and recently launched an online casino tied to its properties there. In 2013, New Jersey became the third state to legalize online gambling tied to a casino.

While Caesars would like to see online gambling legalized and regulated in other states, there are a number of opponents to the idea. One of its biggest is from within the gaming industry: Sheldon Adelson, the chairman and CEO of Las Vegas Sands, whose two resorts on the Strip include the Venetian and The Palazzo. He has backed a number of federal bills to ban online gambling and formed an advocacy group. He also frequently uses the phrase "Click your mouse and lose your house" to describe online gambling.

Jones Blackhurst says such rhetoric only inflames the debate, noting there are protections in place to protect underage and problem gamblers.

"Sheldon Adelson is a great example of someone creating a buzzword that is salacious and brings to mind images of people gambling in their pajamas online," she says. Rather than getting into a verbal spat with Adelson in the media, Caesars has focused on working closely with regulators, so that they understand the protections.

"We encourage the regulators to be the voice," Jones Blackhurst adds. "We feel they bring more credibility with some audiences than a gaming company."

Beyond responsible gaming programs
The company’s CSR efforts also extend to promoting diversity within the workplace. Jones Blackhurst says she only sought to become mayor of Las Vegas after someone suggested the city would never elect a woman. She was also the first elected official to participate, as grand marshal, in a gay pride event. 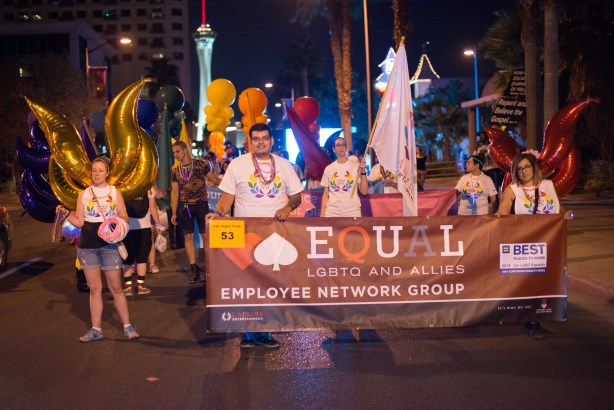 "No one would go because the press would put them on the front page and criticize them," she says. "But I am a real believer that you have to use your position and voice to do the right thing. And if you’re brave enough to find your voice, others will follow. Pretty soon you find you’re not one voice – you’re a chorus."

Jones Blackhurst used her position to get the company to participate in the Human Rights Campaign Foundation’s annual scorecard on LGBT workplace equality. It is also the first gaming company to achieve a perfect score and maintain it, for a record nine years.

She knows her stances can sometimes make her unpopular. Jones Blackhurst is one of the chairs of a state ballot initiative that would increase background checks for gun purchases, for instance.

"I had colleagues who said, ‘We can’t support this. The gun show people won’t come to Nevada and stay with us,’" she says. "And I said, ‘They still will.’"

Frissora says of Jones Blackhurst, "She lives her values every day by standing up for what she believes in and consistently uses her authority to create good for our employees, the communities in which we operate, and our bottom line."

"Jan is an exceptional leader," he adds.

Fight for gender equality
Jan Jones Blackhurst’s passion for gender parity has led her to many roles, including to the Women’s Leadership Board at Harvard’s John F. Kennedy School of Government.

"I’ve been giving the same speech for the last 25 years – that it is still 70 cents on the [white man’s] dollar for white women, 68 cents for African-American women, and 58 cents for Latino women," she says. "It is outrageous."

In addition to being underpaid, Jones Blackhurst says females are also under-represented at senior levels in gaming. She says three of the five largest casino companies (including Caesars) have no female board members.

She also penned a column in the Las Vegas Sun calling for a partnership on a measurement and disclosure tool for gender equality between the industry and University of Nevada, Las Vegas’ International Gaming Institute.

A good model to follow, she says: The Human Rights Campaign Foundation’s rating of US companies for LGBT equality. If the gaming industry can create such a disclosure tool, she says it could end up a "roadmap for the rest of corporate America."

"We learned to be more nimble, so we could maintain many of our programs"