Barack Obama, Narendra Modi and Indonesian president Joko Widodo are leading the way for all global leaders in their prolific use of Facebook to connect directly with their nation and others, says a new study by Burson-Marsteller.

The firm’s World Leaders on Facebook 2016 study charts the use of the social network by the political class over the past eight years, and says it has become the go-to social media platform for leaders to engage with their constituents.

The report is BM’s first instalment of its 2016 Twiplomacy study. 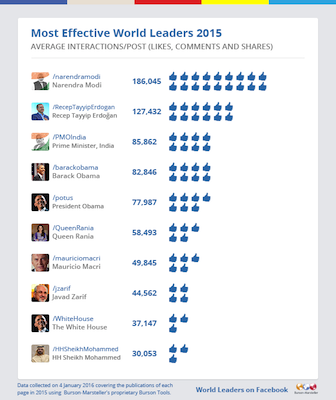 Obama is the most popular world leader on Facebook with 46 million likes, followed closely by Modi with 31 million likes.

However, Modi’s fans had more than 200 million interactions in 2015, which is more than five times as much as Obama.

Across APAC, Indian politicians dominate the Facebook rankings, with Modi, the president Pranab Mukherjee and the foreign minister Sushma Swaraj all active and popular.

Facebook has been widely adopted by leaders across the region.

"This study illustrates that governments are becoming savvier and more professional in the use of social media. An encouraging finding from this study is that, for governments, it seems that quality trumps quantity in terms of what they post," said Jeremy Galbraith, CEO of Burson-Marsteller Europe, Middle East & Africa and global chief strategy officer.

"It is also very refreshing to see that successful politicians on Facebook behave just like any other Facebook user, sharing pictures of their home life, holidays and their children."

Marina Maher steps down as MMC CEO after four decades