Despite having reaped significant benefits from trusting his own instincts, even Lou Hoffman was initially wary about making an early foray into the untamed PR landscape that was Asia.

It was 1994, and he was supporting an Asia-Pacific press tour for The Hoffman Agency’s first global client, Hyundai Electronics, now Hynix. Hoffman’s agency was six years old and making waves in the technology PR sector.

"The fact that so many things went wrong on the tour working through affiliate relationships led me to believe there might be an opportunity," he recalls.

"Still, I hesitated to act for a good two years. I figured if it was such a great idea, why hadn’t other tech-focused PR agencies expanded to Asia and built out their global footprints?"

But make the journey Hoffman did, and today the firm he built from scratch in 1987 is a global PR operation celebrating its 20th year in APAC.

Was this what he anticipated when he left his journalism career behind and moved to a small PR agency in Silicon Valley in the early 80s?

"That’s an easy one-word answer," he replies nonchalantly. "No."

The drive to do things differently that made Hoffman an early entrant into APAC is at the core of why he set up his own agency.

"The standard practice of PR agencies measuring account professionals based on billability never made sense to me. How does striving to bill as many hours as possible benefit the client?" he tells PRWeek Asia.

"That was the impetus to launching my own shop, creating a client-centric culture and structure that rewarded account professionals based solely on areas that benefit the client."

As such, The Hoffman Agency has grown into a leading tech-PR agency with a strong foothold in the world’s key markets, including several across Asia. The firm has offices in China, Japan, Singapore, Korea and Hong Kong.

Having come to the region early, Hoffman has charted the growth and sophistication of PR in Asia, and is increasingly impressed with what he is seeing.

"Asian role models have emerged who value and invest in PR," he explains.

"Take a company like Samsung, which goes toe-to-toe with Apple. Judging as an outsider, I’d say Samsung’s resources behind PR are just as robust as Apple’s. The same holds true for Alibaba, which has become a PR juggernaut, with Jack Ma just as much a PR asset as Jeff Bezos is for Amazon."

Hoffman also tells of Taiwanese client Applied Semiconductor Engineering, the world’s largest semiconductor testing and packaging business. Its executives recently chose to invest in communications, which is why Hoffman came on board.

"Now keep in mind that this is an extremely technical company in a narrow market," he says. "I don’t think this [investment in comms] would have happened 20 years ago.

"Executives in Asia now have a better understanding of communications, which in turn has led to greater investment and sophistication in the programming."

Another facet of Asia’s rapid development in the PR space, Hoffman says, is that Asian organisations "have less institutional PR baggage" than their Western counterparts, many of which have long comms histories.

In a market that is increasingly consolidating, changing shape and questioning the time-honoured PR agency model, having a cleaner slate in Asia "theoretically provides an advantage in terms of reinventing PR," Hoffman says.

"I say ‘theoretically’ because the advantage is counterbalanced by a more risk-averse environment," he explains.

"Still, with less entrenched silos in Asian corporate structures as compared with the West, I wouldn’t be surprised to see versions of integrated comms take off in Asia."

Hoffman is excited about the unrest in the industry and what it holds for the PR firms able to adapt to the changes.

"The PR industry is being reinvented right before our eyes," he says.

"I call out this time period for the profession as being equivalent to what the industrial revolution was to manufacturing. We’re no longer shackled, proving our worth by media impressions."

The rise of consumer purchasing diligence thanks to the internet means all organisations globally are building and fortifying their online presence to engage better with their audiences.

"That’s a massive opportunity for PR because the foundation for online presence depends on depth of content, not clever slogans," he explains.

As for the breakdown of the agency model, Hoffman says while there’s no question the industry needs to change, he doesn’t view the traditional PR model as the obstacle.

"It’s more about muscle memory. Human beings don’t like change. This holds true for those in the PR industry," he states.

"To be the drivers of online presence and communicating to the target audience through a range of channels means rethinking the definition of PR."

It is all a far cry from the weird kid – "weird sounds better than nerdy" – who was obsessed with books and writing, and went on to complete a journalism degree at the University of Arizona in the mid 70s.

"Keep in mind this was post-Watergate, when half of America wanted to be either Woodward or Bernstein," Hoffman explains.

After spending some time at bilingual newspaper El Independiente, Hoffman decided journalism was not for him and headed to Silicon Valley in 1981.

Initially working for a monthly tech publication called Corporate Times, he wrote stories based on interviews his bosses carried out with famous CEOs in the Valley. The sessions were recorded, tapes transcribed, and Hoffman produced the finished article.

"That’s when I got hooked on the tech industry," he reminisces. "At that point, I had never heard of a profession called public relations."

The editor then moved to a local PR firm and took Hoffman on as an account executive. The rest, as they say, is history.

"I soon came to the realisation that I had fallen into an amazing profession," he says. "The mix of writing, creativity, critical thinking and periodic drama fit me."

While there was probably some drama on the road to taking The Hoffman Agency to where it is, Hoffman himself is more concerned with looking ahead than behind, particularly in Asia and specifically China.

Virtually all multi-country assignments in APAC include China now, he says, and it’s crucial for a global agency to be well established there.

"I remember explaining to our Silicon Valley team before entering China that we couldn’t be a serious player in the region unless we had a China presence," he recalls.

"I no longer see it this way. Now, I believe our global leadership position depends on a China presence." 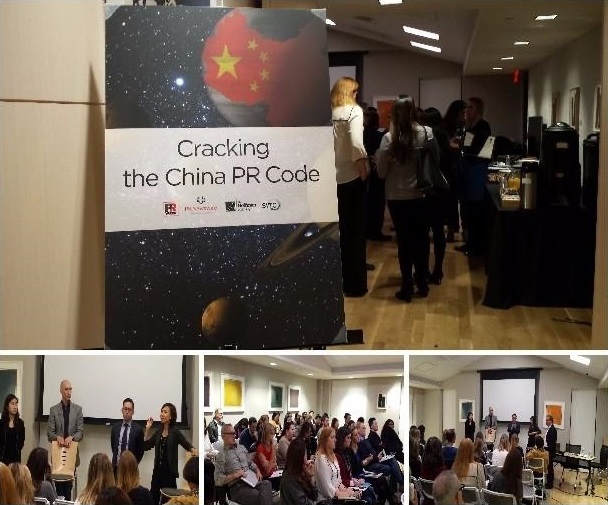 In San Francisco in November, The Hoffman Agency teamed up with PRWeek Asia to host a seminar on how agencies can crack the China PR code (pictured). An important aspect that was discussed is the significant role traditional media still plays in the country, for all its rapid digital development.

"Due to the unique flow of information in China – how’s that for putting it diplomatically – traditional media offers a communications channel to consistently reach the target audience," Hoffman explains.

Moreover, despite much talk of all the innovative work coming out of China and Asia generally, Hoffman believes the region still lags behind the US and Europe.

"One factor has nothing to do with expertise or creativity. If the budget only supports the PR basics, it’s a challenge to up the sophistication quotient," he says. "Yes, more execs in Asia understand PR and are willing to invest, but the size of the budgets often aren’t where they need to be."

The other factor is to do with the agencies themselves, says Hoffman. They must "have the guts" to disagree with Asian clients and counsel them on the best types of comms strategies that will genuinely move the needle.

The most effective time to do this, he believes, is during the pitch or agency review process.

"Of course, this brings risk," he accepts. "Disagreeing with the prospect during a new-business presentation can create a bit of friction, not exactly the perfect dynamic for closing a sale. Yet, such an approach would absolutely accelerate the innovation in the region.

"We’ve made progress in this area, but it’s still a work in progress. I know from first-hand experience it’s a tough one."

That said, Hoffman fully agrees that innovative comms work is taking place in Asia. Local brands are quick off the mark in using digital to demonstrate care for consumers together with local engagement, often with great success.

"This also gets into the blurred line between product functionality and communications in the form of engagement," he says. "Look at how Taobao repelled the eBay challenge in China by better engaging the customer through a buying application that aligned to the specific characteristics of the Chinese consumer.

"Localised engagement will always beat generic engagement. But this concept of engagement goes deeper than a contest on WeChat."

For that reason, consistent communications is the key to success for foreign brands entering APAC.

"We stress the importance of localising content and building market-centric narratives," Hoffman says. "But a single event, no matter how impressive the fireworks, does nothing to advance the cause long-term."

Hoffman says the agency also counsels clients to re-scope their assignments with tighter geographic priorities, given the vast differences in culture and identity across Asia.

"It’s much better to make a difference in two markets than to tick the boxes in four markets with no difference in awareness," he states.

It also the same for Asian brands looking to expand outside the region, Hoffman says.

Interestingly, many fall into the trap he affectionately labels ‘Americanitis’, which is thinking they can mimic their home PR successes in new markets and achieve the same results.

Effective comms campaigns, he believes, must begin with a clinical assessment of how the new market perceives your brand, your competitors and the landscape in general.

This, Hoffman says, can be a painful exercise for some Asian companies.

"The more advantages a company enjoys in its home market, the more difficult it is to build a global brand. For example, a Chinese company that benefits from government air cover might not be prepared for the rigors of brand building on a level playing field," he says.

"With this in mind, there can be cultural gaps. What we perceive as reality can be misinterpreted as criticism or even disrespect."

However, always keen to see the positive side of a challenge, Hoffman says these types of assignments directly connect PR execs to business strategy, which can be a satisfying and even invigorating experience.

All in all, Hoffman says the trajectory for PR and comms in Asia is unquestionably skyward, so much so that it could even overtake the US and Europe in the next decade or so.

"An increasing number of companies will turn their focus to Asia for growth in the coming years, a prioritisation that should benefit communications in APAC in more ways than one," he predicts.

"I think we’ll see Western companies plucking talent out of Asia to be their global heads of communications."

As for his own firm, soon to celebrate two decades in the region, Hoffman says he feels many different things: blessed, inspired, energised.

But, as previously said, he’s only interested in looking ahead.

"I’m proud of what we’ve achieved," he muses, "but also believe the best is yet to come."