DENVER: Chipotle Mexican Grill is blaming national media coverage of E. coli and norovirus outbreaks tied to its restaurants for its 30% sales plunge in December.

Chipotle revealed in a Securities and Exchange Commission filing on Wednesday that, following a new round of illnesses tied to the chain last month and "related national media attention," comparable restaurant sales dropped by 37% for the week of December 21. Restaurant sales were down 30% for the full month of December.

The company said it expects sales to dip 14.6% at established locations for the fourth quarter, marking the first drop since the company went public in 2006. 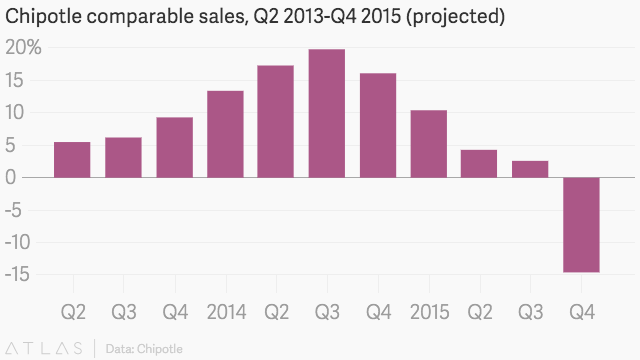 Chipotle also said in the filing that it received a federal grand jury subpoena as part of a criminal investigation tied to a norovirus outbreak this summer at a restaurant in Simi Valley, California. The subpoena, received in December, required Chipotle to produce a broad range of documents tied to the restaurant.

"As a matter of policy, we do not discuss details surrounding pending legal actions, but we will fully cooperate with this investigation," Chipotle comms director Chris Arnold told PRWeek via email, when asked about the subpoena.

The US Attorney's Office for the Central District of California is conducting the investigation with the Food and Drug Administration, the company said in the filing. Chipotle’s shares were down 3% in premarket trading after it disclosed the subpoena and its financial outlook in the documents. Shares were down more than 5% on Wednesday as of press time.

Splits with longtime PR AOR
Chipotle and Edelman, which had been working together since 2008, recently parted ways amid the E. coli crisis, which began in October.

"We agreed in early October to part ways with Edelman at the end of the year because of a sizable piece of business they were taking on that presents a conflict," Arnold said on Tuesday. "We are nearing the end of a search to replace them and should have that wrapped up in the coming weeks."

At least 53 people in nine states have been afflicted by an E. coli outbreak associated with the chain, according to reports.

On the comms front, Chipotle has been ratcheting up its media relations efforts to spread the word about steps it is taking to mitigate the risks of food-borne illness. Last month, Chipotle also posted a letter from co-CEO and founder Steve Ells about the food-safety initiative to its website and linked to it on the chain’s Twitter and Facebook pages. Ells also apologized in an NBC interview to all customers who fell ill after eating in its restaurants and promised to enforce strict food-safety practices.

Chipotle is also updating a FAQ page, set up in November, with news pertaining to the crisis. The portal was last updated on December 21.

The chain’s image has been under attack since September, when Chipotle began fighting back against a lawsuit contending that it has been lying to customers about its food being GMO-free. At that time, the Center for Consumer Freedom created the Chubby Chipotle ad campaign calling the company's executives "fast food hypocrites" for claiming that its menu is GMO-free.

WeWork US members get month of free therapy through BetterHelp

In Buffalo’s wake, marketers look at gun violence through a public health lens

5 takeaways from the PRWeek Global Awards