Boost AIA Life’s presence and appeal among everyday Koreans by living up to it’s branding as ‘The Real Life Company’.

As an insurance giant, AIA has to use alternative and innovative methods to connect with regular consumers, who are perhaps unsure of or confused by the products and services insurance firms offer. A clear example of this is the company’s sponsorship of Korea’s biggest music talent search programme Super Star K. 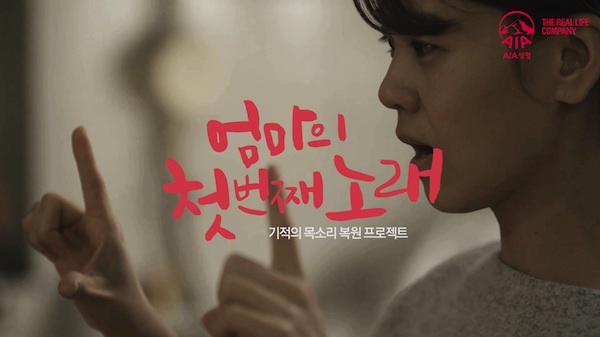 This sought to help Eunju Kim, a mother-of-three with a speech impediment, sing happy birthday to her daughter for the first time in her life through specialised voice creation technology.

It’s the first reported case in the world of a speech-impaired person autonomously generating a restored voice in real time by using a specially developed device.

At the start of this year’s Super Star K season, AIA ran a video calling for viewers to donate voice samples. More than 10,000 responses were received through a phone line and website set up for the campaign. 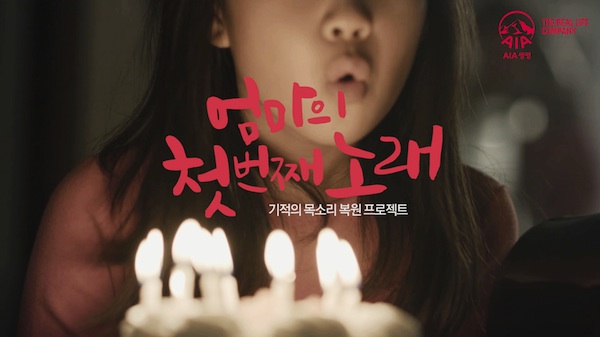 After collaborating with sound engineers at KAIST SRT Lab, a voice that was closest to what Kim’s would have been was developed, together with a machine that read Kim’s sign language and translated it to vocal sounds in real time.

The whole process culminates in a video where Kim sets the table for her daughter’s birthday party, and then sings to her. The couple burst into tears and embrace.

A video was also released of the making of Kim’s voice.

The tear-jerking video was an instant hit on YouTube and was shared across several social media sites. Since its release in late November, the campaign video has had more than 9 million hits on YouTube and Facebook alone.