Thrilled: starting 1/4/16 I'll be leading Policy & Comms for @googlefiber in its quest to make the Web better and faster for all. #alphabet 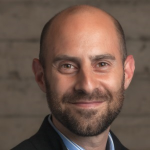 Stricker left Twitter this summer amid what the company deemed a "shift [in] communications strategy and direction." General counsel Vijaya Gadde took over its comms team at that time.

In June 2014, Stricker gained oversight of Twitter’s media unit after COO Ali Rowghani and VP of media Chloe Sladden stepped down. The media team previously reported to Sladden, who reported to Rowghani.

Stricker joined Twitter in 2012 and managed communications for the company’s November 2013 IPO. He previously served as director of global communications and public affairs at Google and worked in campaign politics.

Google Fiber, which was spun off into a separate company from Google under new parent Alphabet this summer, debuted in Kansas City, Kansas, in 2010 and later expanded to Salt Lake City; Nashville, Tennessee; and Austin, Texas.

It announced plans this month to expand to Los Angeles and Chicago, according to Business Insider.