The unauthorised ads appeared over the weekend. Brandalism has claimed responsibility for them on its website.

The summit, which began yesterday, comes amid climate change protests across Paris and in the same month 130 were killed in a Jihadist terrorist attack in France's capital.

In a statement on its website, Brandalism admitted it created the fake ads after the French government banned all public gatherings in response to the terrorist attacks on 13 November. 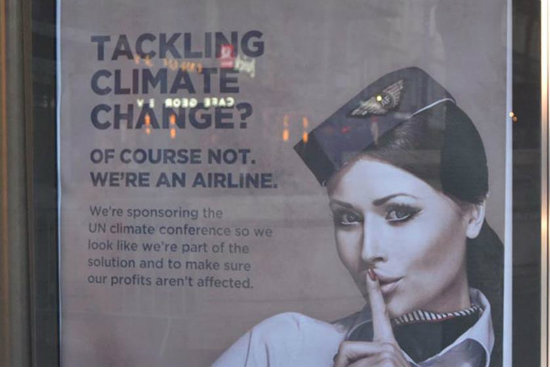 The ads were placed in outdoor spaces owned by JCDecaux. Prominent sponsors of the summit include Air France (see above), GDF Suez-Engie and Dow Chemicals. Heads of state are also parodied, such as Francois Hollande, Barack Obama, Shinzo Abe (see below) and David Cameron. 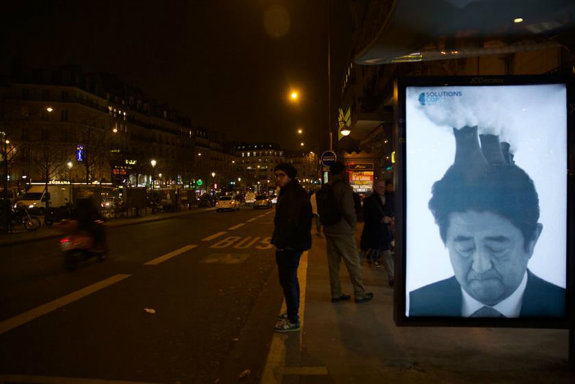 The artworks were created by over 80 artists from 19 countries, according to Brandalism. Many of the artists featured at Banksy's Dismaland exhibition this summer. The works highlight, "the links between advertising, consumerism, fossil fuel dependency and climate change".

Joe Elan from Brandalism said: "By sponsoring the climate talks, major polluters such as Air France and GDF-Suez-Engie can promote themselves as part of the solution, when actually they are part of the problem.

"We are taking their spaces back because we want to challenge the role advertising plays in promoting unsustainable consumerism."