From 'authenticity' through 'de-complexing' to 'going forwards', 'low-hanging fruit', 'ideate' and 'unique'; every possible cliché, piece of jargon and second-rate business nostrum is represented here.

Collectively they draw a picture of a slightly insecure industry that feels the need to pump itself up with pretentious neologisms and hideous imported Americanisms. On the plus side at least top PR people have the ability to recognise when others are being lazy, soulless and corporate.

As you will have almost certainly predicted, the single most obnoxious and overused phrase in our industry is to ‘reach out’, which was nominated by no fewer than 38 of our power elite. Its pompous and portentous description of a simple and emotionally uncharged act – contacting someone  – seems to inspire almost universal revulsion (on this side of the Atlantic, anyway). Strangely, its inversion, "outreach", was also nominated by a handful of people including Incisive Health’s Birtwistle Mike.

The hitherto blameless 'strategy' and 'strategic' came joint second with the phrase 'PR' itself, although no one said what they would replace it with.

Predictably some smart arses responded to the question "which word or phrase would you ban from the PR lexicon?" with the answer ‘lexicon’. 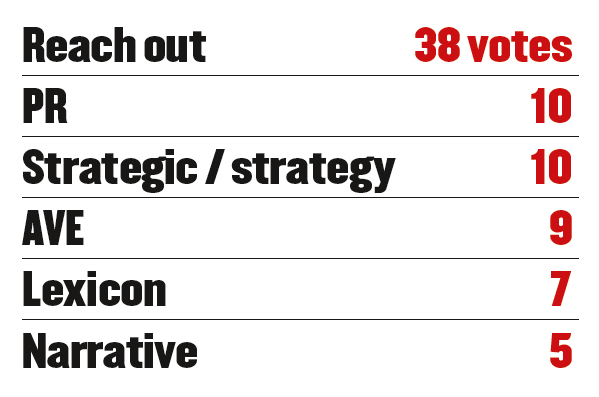