LOUISVILLE, KY: KFC is using its debut in the 2015 Macy’s Thanksgiving Day Parade to give younger consumers a history lesson on its founder, Colonel Harland Sanders.

The brand’s appearance in Thursday’s parade will be its first in the next three years. It’s also the 75th anniversary of Sanders finalizing his famous "original fried chicken recipe of 11 herbs and spices," said KFC CMO Kevin Hochman.

KFC began a social media campaign last week documenting the colonel’s road trip from Kentucky to New York City for the parade. Emanate, the fast-food brand’s consumer and corporate PR AOR in the US, is assisting the chain with the campaign.

"The different stops along the way commemorate [Sanders’] ride to becoming the world’s most famous and successful chicken salesman," said Hochman.

The journey began in Corbin, Kentucky, the site of the colonel’s first restaurant, the Harland Sanders Café. Next up was Salt Lake City, where Sanders franchised his recipe to Pete Harmon, who ran the first KFC and came up with the idea of selling chicken in a bucket. Harmon also created KFC’s tagline: "It’s finger lickin’ good."

The brand has been posting one or two photos of the road trip on Instagram each day and sharing the posts on the chain’s Facebook and Twitter pages.

"We are bringing back the colonel’s values, but in a much more contemporary way that will appeal to not just older people who understand who the colonel was, but younger people," said Hochman. "So just like when young people go on road trips and Instagram all the places they have been, the colonel is right now publishing his photos on his road trip via Instagram."

The parade float will reflect the road trip, with signs acknowledging each location that has a meaning in KFC’s history. Comedian Norm Macdonald, who has been portraying Sanders in the brand’s ads since August, will not make an appearance in the parade, Hochman said.

On Thanksgiving, KFC will also roll out a Christmas TV ad featuring Macdonald portraying Sanders. Part of a series, it will depict the colonel as Santa Claus delivering fried chicken to families. In the first ad, "Colonel Claus" gets stuck in a chimney, with the follow-up ads showing his unfortunate vantage point in that position.

The inspiration for the road trip and the parade appearance came from Sanders himself, who Hochman called "a master of PR."

"As part of our effort to turn this brand around and get back to our north star position, we went through archives and found all kinds of paraphernalia, pictures, and letters from the colonel," said Hochman. "He actually was in many different parades, such as the Rose Bowl Parade and even a Star Wars parade in 1977." 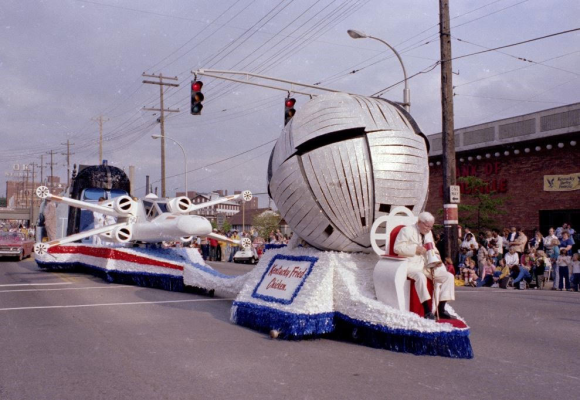 The return of the colonel in May was one part of the chain’s efforts to reverse its fortunes. When KFC was "at its best, decades ago," Sanders was at the center of everything related to the brand, from having his image on the side of buildings to appearing on packaging and in ads.

"He was a part of American history, society, and pop culture," said Hochman. "So we thought there was no better day to bring the colonel back for the holidays than to bring him back for the Macy’s Thanksgiving Day Parade."

In the second half of 2014, KFC saw declining sales numbers, but in the first two quarters of this year, the brand achieved year-on-year revenue increases of 8% and 6%, respectively. Parent company Yum Brands also opened 122 international KFC locations in 39 countries in the second quarter. In the third quarter, sales increased 6% and operating profit was up 3%.

Sanders looked at his fried chicken as a "celebratory product" and would use any occasion to sell it, Hochman noted. For instance, he would say on Election Day, "Whether you are a Democrat or Republican, if you choose KFC you will always win," according to Hochman.

Sanders also portrayed Mother’s Day as a holiday on which families should let the colonel cook dinner. Even 35 years after his death, it is still the franchise’s top sales day, Hochman said.

Meanwhile, on Christmas, KFC offered a compilation album featuring popular artists of the time singing holiday music. The records, sold by KFC in the 1960s, featured Sanders dressed as Santa on the covers.

"Following [Sanders’] lead, we are reminding people on all of the different days that it is a great day to bring home a bucket of KFC," said Hochman. "It is part of a bigger PR strategy in terms of owning days of the week and holidays."