Darren Burns laughs as he appreciates the irony of how he came to work in one of the fastest developing and most innovative PR markets in the world.

"Actually it’s quite funny, the way I got my job in PR was through an advertisement in the newspaper – the good old days! I thought it would be pretty cool. That was in the late 90s and I’ve been working in PR ever since, so it’s gone pretty well."

Burns was based in Taiwan at the time, having moved there from Australia to study Mandarin following two degrees in Asian studies and international business. In 2006 he made the journey across the strait to China, and hasn’t looked back.

"My plan was to go to Taiwan for a year, study Mandarin and go back to Australia, but after the year I thought ‘wow, this is really great’," he explained.

"I’ve been based in China since 2006. Taiwan was great, but then in the mid 2000s things started to slow down a bit. Everybody talked about the hollowing out to China, and I think we really saw the acceleration then. The action seemed to be moving that way."

The move saw Burns switch from GolinHarris in Taiwan to Weber Shandwick in Shanghai and now, as president of the agency’s China group, he tells PRWeek Asia that the PR industry has come on leaps and bounds from when he first began in it.

Back then, when things were still "a bit wild", PR was very much a basic operation, he says: media relations and events for the most part. Budgets were much smaller overall, and consequently so was the scope of the work.

"In those days, a lot of the vendors could be unreliable; the events company might not turn up, for example. It was a bit hairy. I wouldn’t say that the market is matured today, but it’s a lot more mature than it was 10 years ago."

On top of learning the ins and outs of the burgeoning Chinese PR industry, Burns also had to fit in as a foreigner coming into China at a time when it was significantly less progressive than it is now.

His time in Taiwan was extremely helpful, he says, but more important was his genuine curiosity about China, which has blossomed into a love of the place.

"I think if you move here you have to have a genuine interest or love of China to do well. Some people come here for a one or two-year secondment, but unless you’re really interested in learning about the place, it’s a challenge."

Burns also sets the record straight on the misconception that because China’s society is somewhat closed off, so are its people.

"I actually find people here quite open to a lot of things. Both client side and with our talent, people are not hindered by the past that’s happened in more developed Asian markets or Western markets; people are willing to try new things," he explained. 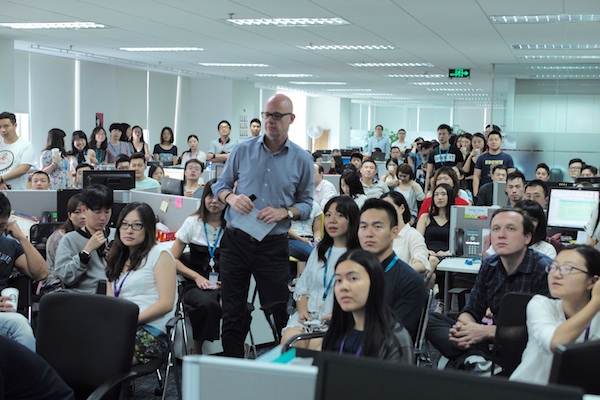 "I got that sense in the first few months really listening and trying to understand clients and people here, and after that I really tried to find out what motivated people. Our team here [pictured] loves to have ownership of things, and I think a lot of multinationals don’t give that; they over-control things."

To that end, it’s no surprise to Burns that China is now "a very sophisticated digital market", whether it’s e-commerce or offline to online.

"I think in many ways it’s leading the world in these areas and we invested heavily in that," he says. "You can be quite open-minded and you can do new things here because people are not beholden to the old ways of delivering."

Weber moved into the digital space early in China, he says, and now around 30 percent of the agency’s revenue is generated from digital-related practices. "That will be nearly 100 percent in the next three or four years," he estimates.

"When I first moved here, I’d say 90 percent of our work was with PR departments or communications offices. That’s still important for us, but more and more of our work is now with marketing departments and CMOs, or digital departments."

The blurring of the lines between the traditional disciplines of PR, marketing, advertising and digital have benefited Burns’ team, he says, as it has allowed them to move rapidly into spheres such as content creation and building digital PR tools.

These areas are crucial when looking to engage with China’s growing middle class, who are hugely tech-savvy and have much greater expectations than ever before.

"If you look at the role of Chinese consumers, they’ve become much more sophisticated, particularly in the tier 1 and tier 2 cities," Burns says. "They also expect engagement from brands."

Unsurprisingly, a fundamental driver of this engagement is social media, which Burns says has moved from being seen as a passing fad in China to something venerated CEOs are using daily.

Chinese consumers crave new and engaging content, Burns says, and to survive brands have to know how to create and deliver it.

"It’s easy to open platforms across Weibo and WeChat, but if you don’t have any relevant content, what’s the point?

"The core thrust has to be putting engaging content at the front of everything we do, because if people don’t engage with the content or the brand, there’s no point."

An in-house database of around 20,000 key opinion leaders, Burns says it’s been a triumph for the firm as it allows them to connect influencers with all manner of clients.

"It’s a key differentiator for us; it’s an ‘in China, for China’ invention. Nowhere else in the world are influencers more popular than in China," Burns says.

"You have people with 20, 30 million followers; that’s bigger than any media you could imagine. So if you have the right influencers saying the right thing about your product, issue or cause, then that makes a huge impact on the brand.

"So we use Kloud not just to promote products for clients, but to co-create campaigns with influencers. It’s very popular."

However, before anybody gets too far ahead of themselves talking about unbridled innovation and openness in China, there are recurring issues that need to be addressed at all times when it comes to operating successfully.

The shadowy presence of the ruling government is a constant for any industry in China, and Burns says PR is no different.

"Everybody needs to be monitoring what’s happening within government, whether local or international. That’s a must-have in China for a multinational or an agency," he states.

Accusations of the government targeting foreign businesses is perhaps unfair, Burns says, as there has been a crackdown across the board on all companies – local, foreign, state-owned – in a bid to clean up some of the bad practices in China’s communications world.

"There’s a lot more conversation around compliance now, a lot more awareness of ethics, which is a good thing," he says.

"Because let’s face it, there have been some horrible incidents of so-called PR firms engaging in things like getting paid to smear a client’s competitor online. That’s a really bad situation, so as the industry starts to mature, we’ll see more and more of a focus on ethics."

However, public affairs, while very important, is not as large a portion of Weber’s business as one might think.

"As far as business goes, the consumer side of our business will always be the biggest. But you really must understand what’s going in China, and having great government relations within the organisation is really key."

Chinese brands make up roughly a quarter of Weber’s business in the country, Burns says, and many are beefing up their internal PR teams by hiring experienced people who have worked in international brands or agencies. 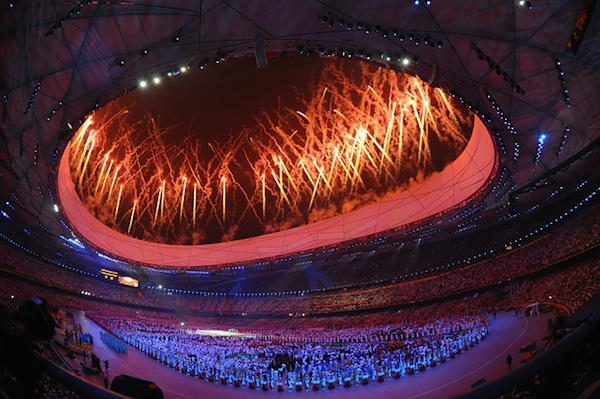 He has also seen behind the curtain after being instructed by China’s government on three major global events: the Beijing 2008 Olympic games (pictured), the China Expo 2010 in Shanghai, and most recently the successful Beijing 2022 Winter Olympic games bid.

Weber was responsible for the international PR for each event, handling the global media relations strategy and social media work. Burns says international agencies are not engaged for local government work; they are drafted in when China is looking to make a splash on the world stage.

"I think they recognise they need support outside China to help them communicate with different audiences."

This attitude is also slowly being adopted by state-owned enterprises, but Burns makes clear that these are a completely different kettle of fish to private, market-oriented Chinese brands.

"SOEs are run by the Communist party; they’re very inwardly focused, whereas some of the most innovative companies in the world now are Chinese publicly-traded private companies – look at Xiaomi and Tencent."

Where there are similarities is in the structure of both types of companies. Burns says often with Chinese brands "they’ve grown so quickly that they don’t have the structures or processes" that befit the size of the company.

"When we’re dealing with Chinese multinational clients, we like to have to access to senior people because we find that unless you have that top access, you can’t really get anything done," he explains. "Sometimes its really about the personalities internally than the process."

But even this is changing, and Burns thinks it’s unfair to expect too much from Chinese brands too quickly.

"People say there are no Chinese brands; I mean, give them a break, they’ve only been doing this since the 1980s or 90s. And China is such a massive market that any company can build up a huge market share here. It’s a huge consumer market and it’s only just starting."

Moreover, it’s a fairly common mistake to assume that because a brand does not have significant presence yet in Western markets, it is not growing. Burns highlights that many Chinese brands are moving into new countries, just not Western ones.

Xiaomi has moved into several Asian countries, while many Chinese companies see India as a market with huge potential.

"So for them, globalisation might be growing into Latin America, Asia, or Africa, versus trying to put a product in America or Western Europe," Burns says.

"We’re close to some of the social media companies, auto makers and tech players, and we see them branching out into developing markets versus going into developed ones."

Many of those clients are asking for integrated communications counsel, which Burns says plays into the hands of firms like Weber, which seeks to blend and tailor their various offerings.

"We see a lot of clients trying to integrate communications and PR with marketing and digital. The breaking down of silos and trying to get a cohesive communications programme across all your channels is key."

Another lesser known string to China’s bow in this regard is that given the rapid and somewhat ungainly development of its communications industry, Burns says it is a much more meritocratic market than other more developed ones, where legacies play a greater role.

"Chinese companies don’t worry about your background as a PR firm; they just want people who can deliver for them," he says.

"The lines are continuing to blur between what a PR agency does versus a creative agency, so it’s almost up to whoever can come up with the best solution for a client on the day."

For those on the outside looking in, Burns has a simple recipe for success that remains the core of every multinational that continues to thrive in China.

"You really have to be in China, for China," he states. "Of course you can leverage your global tools, which we do, but you really have to get a deep understanding of how things operate here.

"You have to engage with the Chinese audience and there’s no easy way out. You can’t do it by remote control and not invest your time in China; it just doesn’t work."