Three years after my last visit and the mood in Japan has totally transformed from the post-3/11 recovery after the calamitous earthquake and tsunami to a bullish pre-2020 Olympic glow.

After a 20-year hiatus, optimism is returning to the Japanese psyche, fueled by the continuing impact of Japanese Prime Minister Shinzo Abe’s "Abenomics" economic reforms, a slow-down in China, issues in Europe, and the prospect of the 2020 Olympics in Tokyo.

The PR profession is evolving and there is much more awareness amongst the C-suite of the importance of communications in running an effective business, as well as the need to look outwards and think globally.

I was in Yokohama at Nissan HQ to conduct a roundtable on the Japanese PR market, and one of our panelists, Billie Cole from Rakuten, explained how the company’s inspirational CEO Hiroshi Mikitani instigated a radical process of "Englishization" five years ago, whereby English became the de facto language at Japan’s answer to Amazon.

The overall Japanese PR market is worth around $3.6 billion, but it’s very different to the West - here are some of the other things that caught my eye during a busy week in Tokyo:

Line – Mobile services app Line is all the rage in Japan, and other countries in Asia such as Taiwan, Thailand, and Indonesia. Launched in 2011, it has quickly usurped Mixi as the most popular social network and now was more than 212 million monthly active users. Line is doing so well in Asia that it doesn’t have any particularly aggressive plans to focus on the US and other global markets at the moment, especially as products such as its popular stickers don’t necessarily translate to non-Asian markets in their current form.

Video Wire - Vector PR is pioneering a Video Wire service whereby it shoots and edits footage for clients from press conferences, events, and other brand activations, and then publishes the results on a proprietary platform. It’s an ad tech/native advertising play and clients pay based on the number of media impressions and interaction the content attracts. The content is also distributed on other social channels such as mobile app Line News. The agency has already produced 300 case studies and expects to increase that to 2,000 by next year. A recent film produced at a live event by Bulgari received over 300,000 page views.

By establishing a platform it hopes will become the de facto destination for this type of content the agency wants to grow the format into a new service that other firms will also buy into. It will then extend the creative options the branded content play can offer and add PR on top. I guess it’s not totally dissimilar to Business Wire’s BizWireTV service, though brought to you by an agency rather than a service provider.

Investor relations – Vector also has a version of its Video Wire service for the investor relations community, dubbed IR TV, which companies can use to expand on their financial results and other business announcements. It features corporate videos or CEO messages and the content is housed on a central portal as well as being embedded on financial websites. Both services operate on a pay-per-play model, rather than fixed fees.

Tokyo PR Woman - Vector also produced an unusual strategy to attract talent into the PR profession, through its Tokyo PR Woman film. Clearly this is a very different cultural fit compared to the US, but it proved immensely popular with young people in Japan and showed in 30 theaters in August.

Dentsu – It is difficult to underestimate the power and influence of Dentsu on Japanese business and, indeed, society generally. The advertising and PR behemoth’s imposing building dominates the skyline in the Shiodome district of Minato in Tokyo. At Dentsu the mantra is POEM (paid owned earned media), rather than the more familiar PESO acronym we are used to in the US. 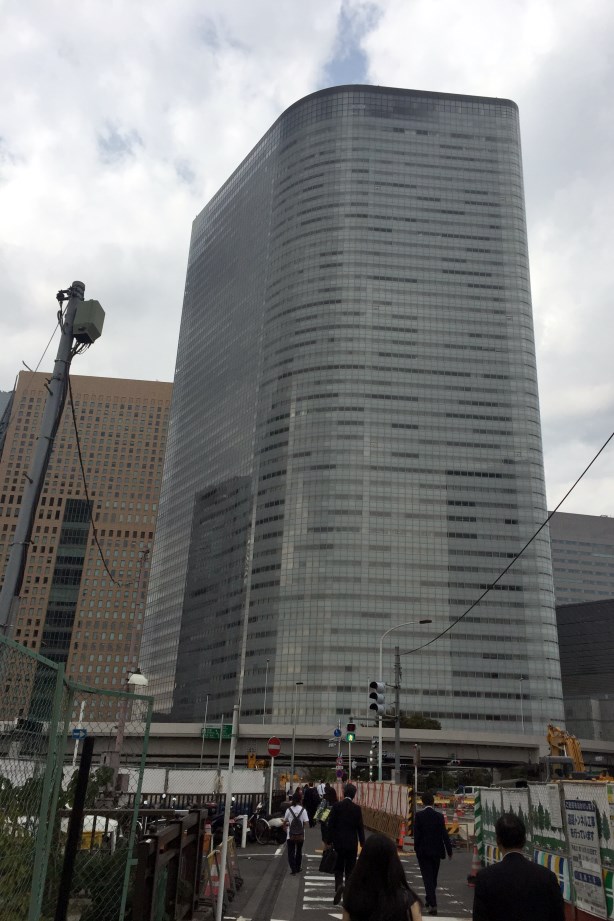 The Dentsu building dominates the skyline

PR exists in the main business in Dentsu’s iPR division, as well as in a separate Dentsu Public Relations outfit that sits in a less glamorous building adjacent to the main HQ and definitely bears the hallmarks of a scrappy media relations bureau rather than the glossy surroundings of the ad and media folks across the road. 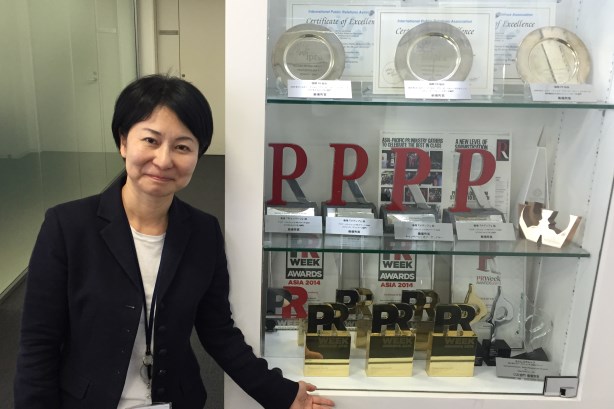 However, the firm still produces some creative and interesting work for clients, such as its ‘Where are my cheeks?’ campaign for Kumamoto produce and ‘Detective Clean’ activation for online dry cleaning delivery service Lenet.

Talent – Just as in the US, the key to producing effective and creative ideas is having PR people involved from the beginning of the process, and PR firms are hiring talent from ad agencies and other diverse backgrounds. According to Dentsu PR’s president and CEO Takehiko Chikami, the preeminence of PR only started around five years ago, however, and the potential for a golden age will be realized over the next decade. There are still only a limited number of universities where students can learn about PR, for example.