James Watt's 'Business for Punks: Break All the Rules' is a manual for entrepreneurs, and explains how BrewDog has grown organically into a 500-strong global company, including a chapter on marcoms. 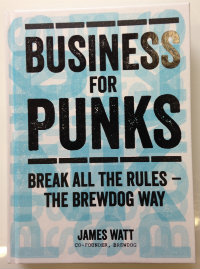 Watt writes that he believes that "humour is the best way to make anyone fall in love with a brand" and that not having a marketing budget can in fact be a "massive advantage" as it forces creativity.

"Mass media is old media," he says, advising start-ups to target a niche audience instead. "Online you can not only compete but you can kick the ass of these bureaucratic risk-averse incumbents, who've had it their way for far too long," he writes.

On the topic of publicity stunts, Watt says these are not for the faint of heart. "A few high-octane bombs can massively enhance your brand," he says, but adds that in order to do this you must already have a strong following.

Watt also advises companies to "think global as opposed to local" and stresses that again this does not require a budget or export experience. "We have a tried and tested zero-budget technique we have used time and time again to get a solid distributor and instant traction in new export markets on the back of localised free PR."

PR agency Manifest has been working with Watt on his book launch alongside other projects.

In August, BrewDog itself took on The Romans as its retained PR agency, replacing Manifest.