Yes we get it, most of the readers of the PR Week will work in, or with, an all-singing and occasionally dancing, cutting-edge, fully-integrated, platform-hopping and digitally-savvy PR agency.

But if we can just prize you away from your Hootsuite account for one minute, there’s some shock news in from the US; the humble press release is still viewed as the most important tool for journalists.

More than 60 percent of respondents to a survey said their job would be more difficult in the absence of newswire-distributed press releases, compared to only 2.8 percent who said it would make work easier.

Admittedly, many agencies may now prefer to engage directly with consumers, and not have to worry about grubby hacks like yours truly.

"I think for a while everyone was focusing on driving peer recommendations, but we must not underestimate the importance of journalists’ expertise," she said.

Blast from the past

From the present day, to Back to The Future. Children of the 1980s were no doubt feeling older this week when October 21, 1985, flashed on their Apple Watch.

In the time-travel movie Back to the Future Part II, released in 1989, this was the date the hero Marty McFly, played by Michael J. Fox, leaped forward to in an attempt to get his future son out of trouble.

The film’s comic imagining of what would be cool for the next generation offered up hover boards, flying cars, and self-lacing boots, as well as some light-hearted product placement.

All which led to plenty of brands piggybacking this week’s milestone to secure some marketing mileage. Ford created a mock-video, Pepsi released a limited-edition product, and Toyota has created a campaign tying together its forthcoming launch of the Mirai, a car that runs on hydrogen fuel cells, with Back to the Future Part II’s vision of cars running on fuel cells powered by rubbish.

Wisely VW, whose motors featured in a couple of the movies, didn’t get involved, presumably figuring they'd already been responsible for enough hot air in recent weeks. 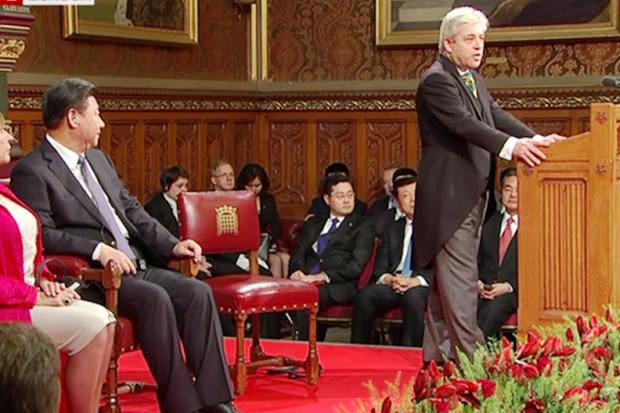 President Xi Jinping’s visit to the UK has been generating plenty of column inches in the host country, especially around trade and human rights.

Many have pointed out the none-to-subtle shift in PM David Cameron’s tone in recent years. Referring to human rights issues in 2010, he said "nothing was off the table" when it came to discussions with the Chinese. Now, with China and the UK brokering a raft of trade and investment deals, his stance has, to put it politely, been modified.

The only problem is, no-one seemed to tell the UK speaker of the House of Commons, John Bercow (pictured above), who introduced Xi to parliament. In his welcoming address, Bercow went to great lengths to reference to Myanmar’s opposition leader Aung San Suu Kyi, praising her as being the "international symbol of the innate human right of freedom."

Cameron and Bercow have long had a tense relationship, with the PM once telling a "dwarf" joke about the diminutive speaker, who has repeatedly clashed with ministers in parliament.

And after his efforts this week, it’s safe to assume Bercow’s standing in the eyes of the Snow White PM hasn’t grown further.

Among the movers this week are Jill Hazelbaker, who swaps Snapchat for Uber as comms and public policy VP; Chris Foster, who is taking a third turn at Burson-Marsteller as worldwide EVP; Lorna O'Neill, who became Trainline's first UK PR head; and Brandon Copple, who joined Greentarget as content director.

Meanwhile across the globe, Burson-Marsteller won the AOR slot for Zebra Technologies in several regions; BlastMedia in the US became Long John Silver's social media PR agency; and Kodak turned to John Doe for influencer comms.

Last week we said if Malaysia Airlines’ proposed rebranding was a success, it would represent one of the most impressive turnarounds of all time. The National Union of Flight Attendants in the country, however, disagreed.

"[It] will be a huge waste of money and worse, will bury our national carrier's only surviving pride further. ‎Why should we bury and change the MAS logo and spend more millions again?" it said.

One thing is for sure, If the airline, unions and staff can’t sing from the same hymn sheet, then the extremely difficult rebuilding task will be mission impossible.

Whatever ChatGPT says on creativity, do the opposite