That is according to a new report that argues gender equality is "on the brink of becoming a powerful driver of reputation".

The study, sponsored by Weber Shandwick and KRC Research, asked 327 executives in 55 global markets to identify reasons for being involved in efforts to help women reach leadership positions.

In total, 17 per cent cited improving corporate reputation, although this reason was behind others such as "improving our ability to attract and retain talented women" (46 per cent) and "women make good leaders" (35 per cent). 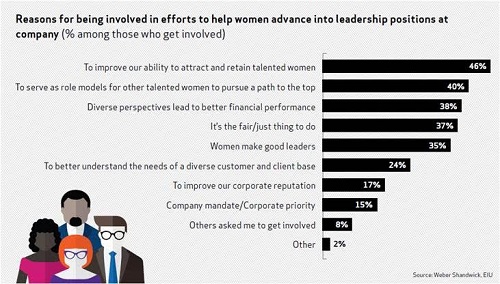 The study, conducted by the Economist Intelligence Unit, also found 39 per cent of the C-suite executives surveyed said their companies actively shared information about their gender equality efforts to enhance their corporate culture and public perception.

Among so-called "gender-forward pioneers" – those showing a greater commitment to diversity – around two in three said they publicised gender equality initiatives because it was good for their corporate culture and reputation.

The report, entitled Gender Equality in the Executive Ranks: A Paradox — The Journey to 2030, states: "As the media continue to report on gender equality wins and losses at the upper rungs of business, companies should consider communicating on the strides they are making.

"Regardless of where they fit on the gender diversity spectrum, competitors will be taking advantage of their own achievements and looking to earn first-mover status."

Leslie Gaines-Ross, chief reputation strategist at Weber Shandwick, said: "According to our new report, gender equality is now on the brink of becoming a powerful driver of reputation.

"Information about C-suite gender equality is surely becoming more accessible. Social networks and search engines can more easily assess companies on their gender equality practices. ‘Best of’ rankings lists are already flourishing and there is no reason to believe that more of them will not be rating corporate gender balance.

"The writing is on the wall for companies. Achieving gender equality is highly likely to change from a boardroom and executive issue to a consumer one and to do so soon. As media coverage, millennials, gender-forward pioneers and women make the gender issue ever more topical and urgent, consumers will follow close behind."

The report warns companies to ignore the media "at your own risk" when it comes to gender issues.

"We have seen how the media have had a hand in reporting on early debates about climate change, LGBT, gender mutilation, AIDS/HIV, obesity and corporate social responsibility, all of which are now worldwide mainstream concerns.

"Whereas gender equality might not be at the top of corporate agendas in 2015, leaders are advised to pay attention to how the winds of public opinion are shifting and how the media is chronicling every argument for change. The smartest companies will keep close track of this rapidly changing movement and have a voice in the conversation."