Through a YouGov survey that polled views from a broad range of PR professionals, we concluded that the term 'PR' may die out by 2030. By the same date, readers also expect press releases to be a lot less common, and think that PR will gain in importance versus other marcoms disciplines, the survey found.

Meanwhile, some of the sector's rising stars predicted further evolution around tech and data, increased gender equality, and more.

Here's a selection of reader reactions to these findings – tweets mostly come from UK PRs, while Facebook discussion (see end of article) saw North American readers have their say.

On the predicted demise of the press release

One reader thinks it has already happened; another seems to have heard that prediction several times before.

Press releases have been dead for two years https://t.co/f8i8snw5hA

@prweekuknews Press releases will not die but evolve. In short term they will become more multimedia with rise of video & digital newsrooms

@prweekuknews I believe the future of comms generally is more visual bite sized messaging that engages.

On integration and the blurring of marcoms boundaries

Great article! I've always said that the line between PR and marketing should disappear, it's two sides of the... http://t.co/ubfcyMwxBp

We have to diversify as technology changes the way in which we communicate. The discussion should move on http://t.co/sfw1zzu1YL

On diversity trends in the PR industry

Glad to see other #PR folk are recognizing the need for diversity in the industry http://t.co/ntt8voVSdi via @prweek pic.twitter.com/NOPVGczv9A

So claimed FleishmanHillard's Elizabeth Mercer, one of our 30 Under 30. 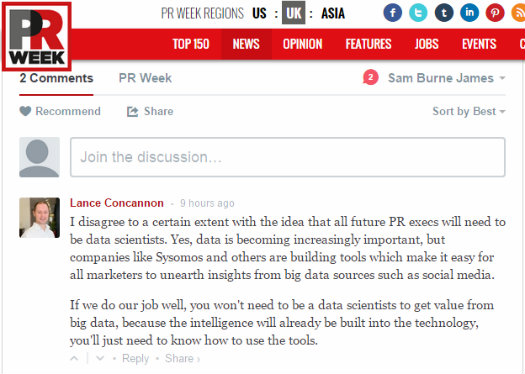 With the growth of research based campaigns... could this be true? https://t.co/MR13k2Y5ZT

Mercer from Fleishman again. Perhaps predictably, the reaction to this was less positive among journalists.

@prweekuknews yes - as long as those holding the purse strings allow the content to be fair, insightful, entertaining and subtle

We also heard from a quartet of North American PRs via the PRWeek Facebook page, who took advantage of not having to restrict themselves to 140 characters. 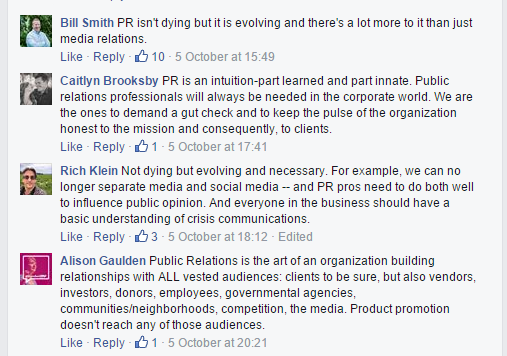