You might think we should be grateful to Shell. If you took away every product it has a hand in, you would be left naked and starving alone a in a field. All your food, all your clothes, your shelter, your transport and all of your lovely consumer goods would be gone – along with most of the people close to you.

The energy from Shell and companies like it doesn’t just create wealth, it creates health and has allowed more of us to live a better quality of life than at any time in human history. Yet across the world, from the Arctic to Tierra del Fuego, from California to Siberia, Shell is distrusted, resented and even hated by many of the beneficiaries of its industry.

Why does a company that does so much for us have such an image problem? According to Andy Norman, Shell’s vice-president for media relations, Shell has only itself to blame: "The truth is that collectively in this sector, we developed a reflex to bad news that meant we thought it was better to stick our heads in the sand and not engage."

Strictly speaking the problem was not that Shell was failing to engage. It just wasn’t engaging publicly. "With bigger, more complex issues we tended to spend effort in high-level advocacy with policy makers," admits Norman. "We neglected to get into debate with cross-sections of society."

This of course only fuelled the perception that Shell operates as an ‘eminence grise’, using its vast yet unaccountable economic clout (Shell’s annual revenue is approaching half a trillion dollars) to do pretty much whatever it likes, wherever it likes.

As a result the company has taken a series of massive reputational hits over the past couple of decades. First came the Brent Spar crisis of the 1990s in which Shell was prevented by Greenpeace from disposing of a redundant oil storage facility by sinking it in the Atlantic (even though Greenpeace later admitted it was mistaken). 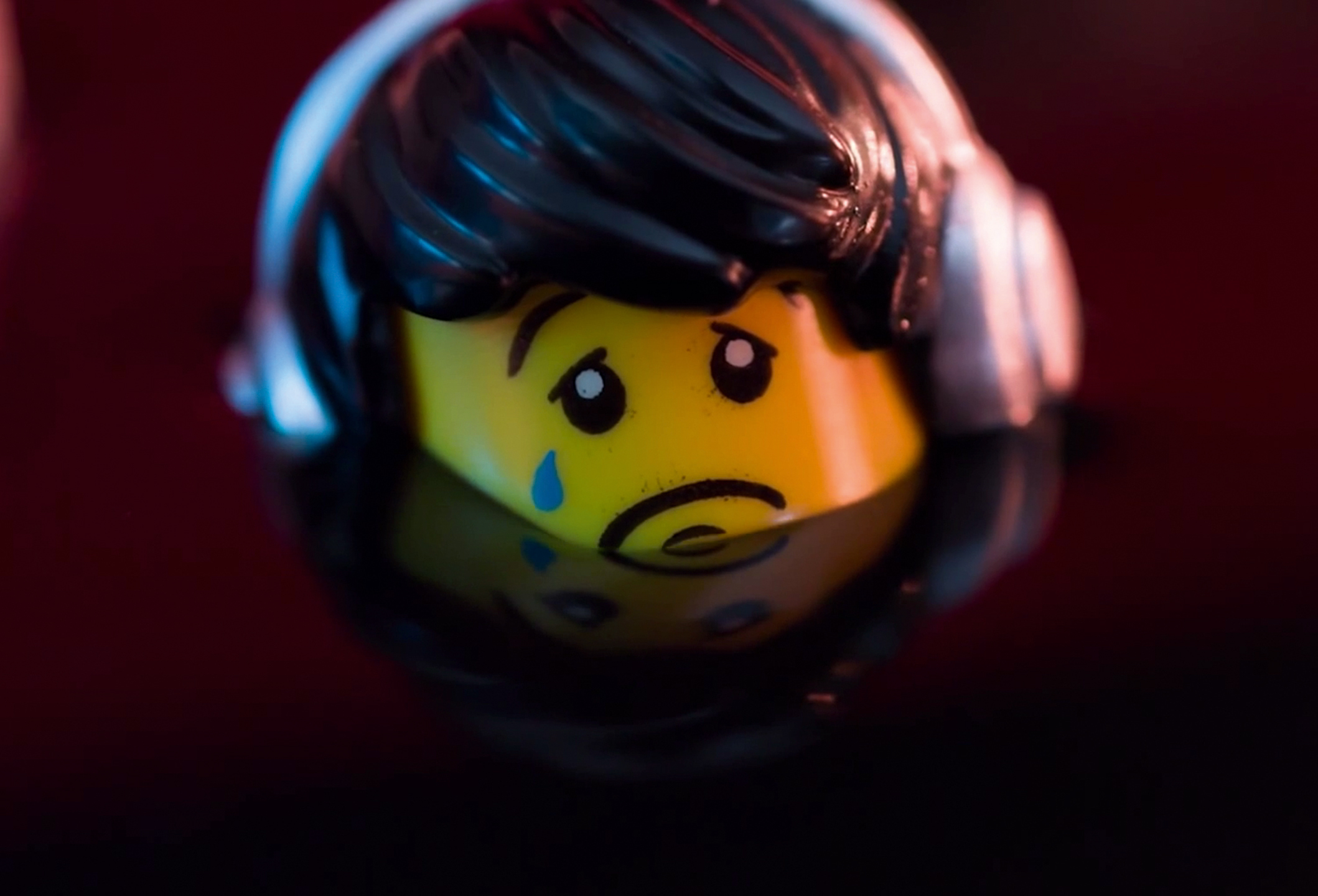 Ostracised: Greenpeace pressured Lego into dropping its partnership with Shell

Murky reputation
It was somehow implicated in the minds of many as one of the puppet masters behind the two Gulf wars. Then there were pollution claims in Nigeria, which Shell has recently settled with a £55m payment after a three-year High Court battle. More damaging still was the embarrassing revelation in 2004 that Shell had overstated its oil and gas reserves by 41 per cent.

And now there is the controversy over Shell’s plans to drill for oil in the Arctic, which could contain as much as 30 per cent of the world’s undiscovered natural gas and a tenth of its undiscovered oil reserves. The company received final permissions to start work in Alaska from the US government in July.

It is fair to say that the environmental lobby led by Greenpeace, which opposes drilling on safety, environmental and carbon-emission grounds, has run rings round the oil giant. Earlier this year for instance it embarrassed toy maker Lego into dropping a decades-long joint promotion with Shell.

Early last month Greenpeace hit the news jackpot yet again when it arranged for a string orchestra to play a Titanic-themed ‘Requiem for Arctic Ice’ outside Shell’s London HQ.

Norman reveals that Shell’s ability to communicate was hampered by the fact that until quite rec­ently it was not really a global corporation at all. It was two multi-local businesses, Royal Dutch and Shell:  "We had two boards and a committee of MDs. Sometimes we had to beg and borrow resour­ces from national markets to get messages out."

One of the consequences of the reserves crisis was that in order to improve governance the two companies merged to form Royal Dutch Shell. "PR was the last of the functions to be globalised," says Norman. He now runs a team of 60 and reports to Mike Napier, the vice-president of the comms function, which has 800 people worldwide.

Most of his time is spent on media relations. Rec­ently he says about 70 per cent of his time has been spent leading Shell’s comms around its purchase of oil explorer BG group for £47bn – the biggest deal in UK corporate history. He anticipates spending most of the next couple of weeks "helping the inv­estor relations guys dealing with the quarters" – Shell’s second quarter results, which came out in July. This included the announcement of 6,500 job cuts and a 35 per cent decline in annual profits.

But it is communication aimed at protecting what might be called Shell’s licence to operate – the tacit support for its activities from society – that seems to occupy his thoughts at the moment. 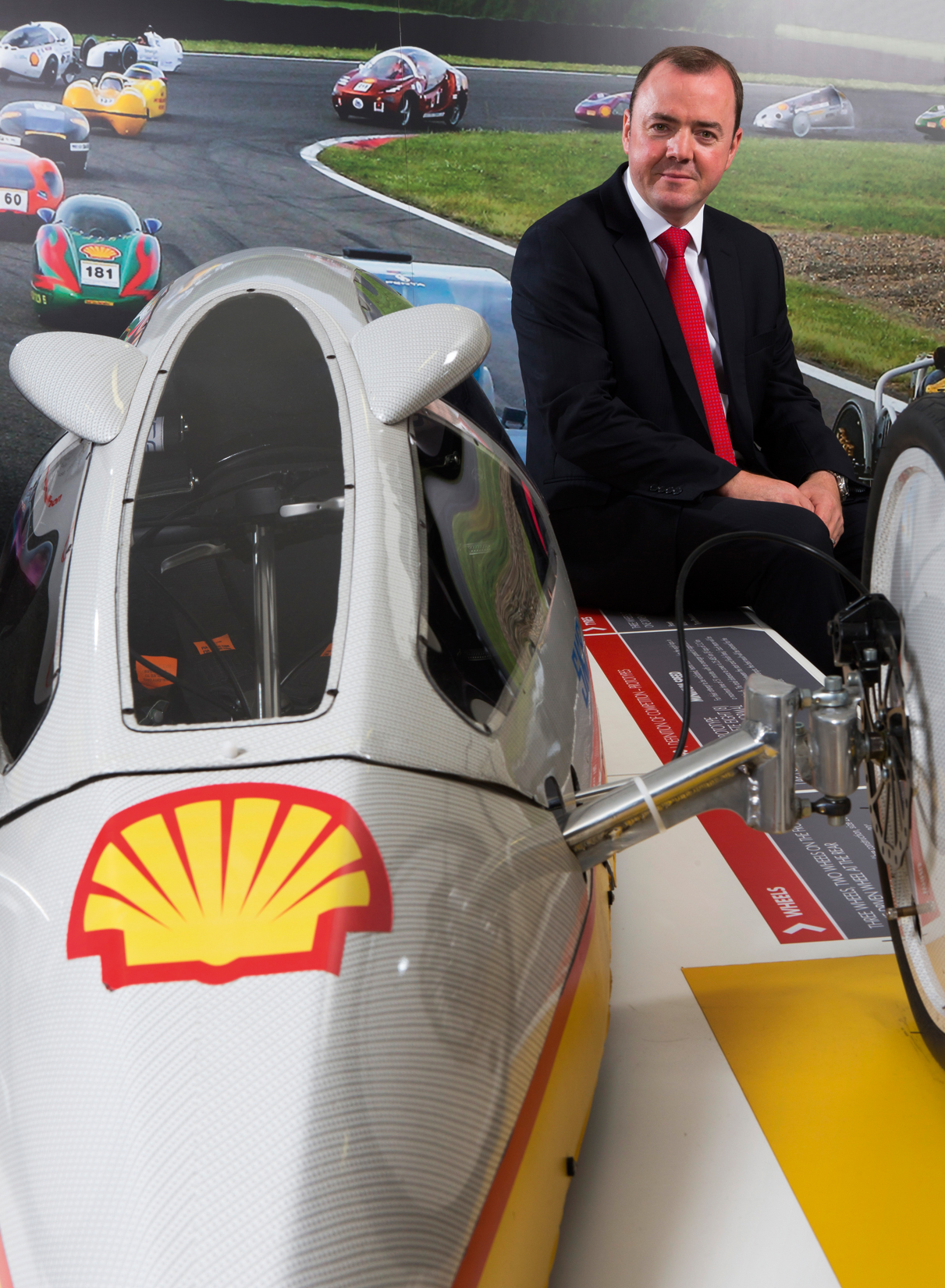 Armed with its new ability to tell a coherent story, Shell is tiring of being cast as the villain of the piece and has finally opted for a policy of eng­agement. "Our approach isn’t just about different language but how, when and why we participate," he says. This interview, for instance, simply would not have happened even a couple of years ago.

"It would be a tragedy if the energy sector were to be badged in the same way the tobacco industry was 20 or 30 years ago," says Norman. His point is that oil, despite all the damage it is doing to the environment, has real benefits for a large proportion of mankind and that story should be told.

So according to Norman, the Arctic is not a virgin wilderness; it already produces large amounts of oil. "Its four million inhabitants say they want economic development. The decision to open up the Arctic was taken by sovereign governments. When we look at a project like Alaska we do it from a logical perspective. If we didn’t feel the risks were manageable, we wouldn’t do it."

But of course objections to Shell’s Arctic adventures are not just about the dangers of an oil spill, they are about global warming and the planet’s future. And although Norman does not say so, they are about the future of Shell because the Arctic is Shell’s biggest source of future oil production. Ind­ustry commentators say Shell has bet the ranch on Arctic oil and gas and has to back it to the hilt.

Whether that is true or not, better comms will help Shell achieve commercial objectives in a variety of ways, says Norman. In the short run, greater engagement should help mitigate the extra costs imposed by protests on developing new reserves. "When you invest billions in new projects, delays are incredibly expensive," he explains.

Better communication could also help address the looming threat to the share price represented by the divestment movement, which is encouraging people and institutions not to invest in hydrocarbon companies on ethical grounds.

So in the longer run Norman thinks Shell must make the case for continuing to produce hydrocarbons. His starting point is that Shell is not a climate change denier: "I think Greenpeace has a leg­itimate concern and it’s a concern we would share. We were one of the first companies to make the link between hydrocarbons and climate change. Global warming is real and we absolutely accept that we have to take carbon out of the system."

Note those last nine words, because it turns out that they are Shell’s get out of jail free card.

Meanwhile Norman presents what you might call an inconvenient truth for those who want to decarbonise the global economy overnight: "The world’s population is going to increase by two billion in the next 35 years, which means that the world energy requirement will double. Today renewables make up one per cent of total energy and it has taken 30 years to get to that."

Even if renewables continue their "heroic growth" they will only supply 30 per cent of the doubled energy demand. But renewables will not be able to plug that energy gap: "We accept that we have to take carbon out of the energy system. But you can’t run heavy industry on photovoltaics and renewables because they are so intermittent and they don’t pack the punch of hydrocarbons. So we don’t accept that you can live without hydrocarbons in the short term."

Apart from anything else there is just "too much inertia in the world’s energy system", he says. "Transition will take decades. Our belief is that we can get to zero emissions by the end of the century."

The trouble is of course that sea levels could have risen by several metres and billions could die. "The urgency is clear," agrees Norman. "That’s why we need a global framework to make sure energy producers adopt sufficient measures to mitigate C02."

It would help if Western consumers could wean themselves off their massive energy habits. But that seems unlikely. Norman predicts that "consumers won’t divest hydrocarbons from their lifestyle", at least not in sufficient amounts to make a real difference.

One inference is that Western consumers are pinning the blame for their pollution on companies like Shell and are unwilling to address their own role in creating the problem in the first place.

Natural gas is another source of mitigation, he argues. Shell’s chairman Ben van Beurden has publicly committed Shell to move from being "an oil-and-gas company to a gas-and-oil company". While the environmental lobby says that natural gas emits too much carbon dioxide, reinforces mankind’s addiction to hydrocarbons and makes it harder to establish renewables, Norman says that switching from coal to gas in power stations would reduce their carbon emissions by half. That is certainly true, although perhaps over-egged.

According to the International Energy Agency, oil supplies slightly more of the world’s total energy than coal (31 per cent vs 29 per cent) and gas has only two-thirds the emissions of oil. 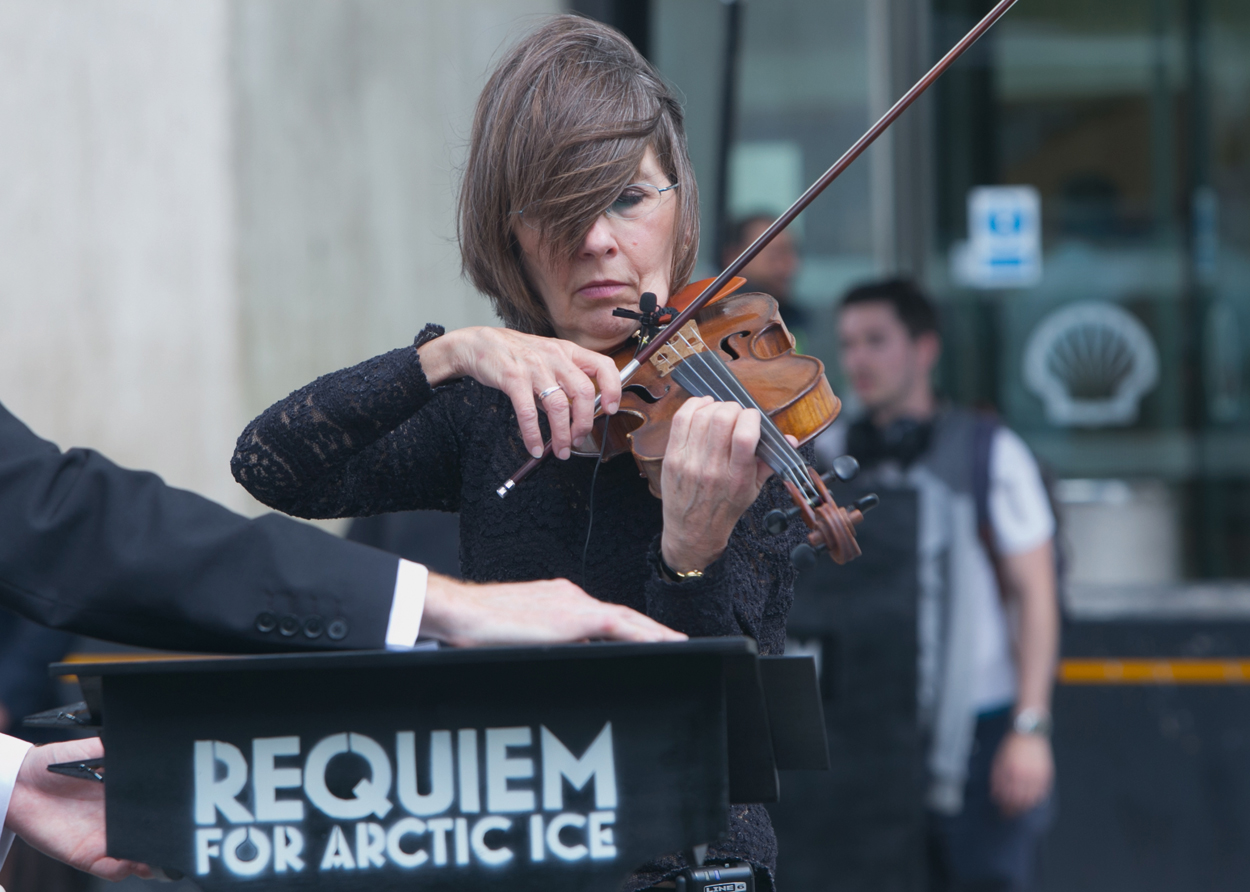 Arctic offensive: Greenpeace arranged for a string orchestra to play a ‘Requiem for Arctic Ice’ outside Shell’s UK headquarters

Take out the carbon
Shell’s main argument for continued oil exploration is based on the idea that harmful carbon emissions can be neutralised by being collected at the point of production and subsequently stored underground. That way there would not be any extra carbon in the atmosphere in the first place.

"It’s proven technology, it can be done and we have been doing it for years," says Norman. So in this country Shell is planning to develop the world’s first full-scale gas carbon capture and storage project – at the Peterhead Power Station. In theory at least, up to 10 million tonnes of carbon dioxide emissions could be captured and transported by pipeline offshore for long-term storage deep under the North Sea.

So why doesn’t Shell make a massive investment in carbon capture? "Without a price on carbon you can’t invest. If we announced a $35bn programme on carbon capture and storage then Ben [van Beurden] would lose his job. So it’s not going to happen."

If Shell is so aware of the dangers of global warming, why doesn’t it use all its technological and financial muscle to help the push for renewables? "Ten years ago we did have a hydrogen business, a little bit of solar and some wind assets. But we realised we can’t add any value in that area. We are a company that is essentially a bunch of geologists and engineers. If you want huge technological strides in wind or solar you don’t get a load of geologists to do it."

So Shell finds itself incapable of doing anything other than selling a product that is destroying the planet. Faced with shareholders who will not compromise on their returns and consumers who refuse to compromise on their consumption, it will take all Norman’s powers of engagement to square that particular circle.