The performance review is typically an annual event for PR pros, just as it is for those in many other fields. Not surprisingly, it represents the best time to negotiate a raise, agency CEOs, HR heads, and in-house comms leaders tell PRWeek. But how much of a raise should you ask for? What is the protocol for asking outside the usual yearly period? And what does it signal if you get a small bump or none at all?

Since he launched W2O Group 14 years ago, Jim Weiss, founder, chairman, and CEO, has personally evaluated every one of his employees for an annual raise and collaborates with the CFO on salary upticks.

"From the employer perspective, happier staffers obviously do a much better job," he explains. "Part of that happiness equation is them being able to provide for themselves."

Craft your argument
Now that the firm has about 450 staff, Weiss might not have input into every salary decision this year. But he says he has heard it all when it comes to raise requests.

"My pet peeve is when someone explains, ‘My rent went up.’ That is not a good reason for a raise," Weiss states. "Or I’ve had people ask for a raise in light of poor performance or not meeting their goals."

The best way to ask, according to him: "Align your argument and rationale with the performance of the business and the goals of the company."

Weiss goes on to explain that means having a clear picture of the profitability of the accounts you work on – "always come armed with your numbers" – as well as the health of the company as a whole.

"People at the VP level and below don’t always pay attention to the numbers. I know I didn’t when I worked at Hill & Knowlton," Weiss says.

"You don’t go in and ask for a $25,000 raise if the company has not met its numbers; you want to track close to the company number," he adds, explaining that if the company is growing by 15% or 20% and profit is going up, raises will more likely follow a similar track.

PR practitioners who work for a publicly traded company or corporate parent can easily access signals that shed light on compensation policies and allowances. FedEx, for instance, announced in its most recent Q4 results that earnings were hampered "by increased employee variable incentive compensation."

Patrick Fitzgerald, SVP of integrated marcomms for FedEx, says employees can factor that disclosure into their expectations. At the same time, they also know the organization has increased investments toward bonuses that can prop up their salary.

And to avoid disappointment come review time, Fitzgerald also encourages staff to "seek regular feedback and communication from supervisors throughout the year, including in terms of performance." If you work for a private company, you may not have the same easy access to information. Don’t be shy about enquiring, advises Grace Leong, CEO of Hunter Public Relations. She says agencies want entrepreneurial-minded employees who are interested in the business year-round and not just at review time.

"When someone comes to me passively and asks about the business, I think, ‘This is the kind of person I want to invest in because they want to know how we grow and how we don’t,’" says Leong. "That way, they can then process how they might be affected by the information in a good way or bad."

Raises outside review window
Raises are most likely to be awarded during an annual review or as the result of a job promotion, but some of the experts interviewed say it is OK for PR pros to discuss a possible salary hike outside the usual window. They note that this differs from some other professions.

Katie McGrath, SVP, HR, Fahlgren Mortine, says the agency will consider giving some staff a bonus or an additional raise, "to ensure we’re moving compensation along accordingly for our top performers."

But she says employees should keep in mind that raises off-cycle are held to the same factors as when considered during a performance review, noting, "Just because you’ve won an account doesn’t mean you are suddenly warranted a salary increase."

Weiss says the right candidate for an off-cycle raise is "someone who has engendered positive change, brought great people and clients into the company, and is getting kudos from clients. That is a great time – right after the finish of a big project and you’re getting a lot of glow."

He does not believe it is a good strategy to ask just because you have received an employment offer for more money elsewhere.
"It never tends to go that well when you’re putting a gun to your boss’ head," stresses Weiss, who would rather see candidates make the case as to why they deserve the increase.

What no raise means
PRWeek also asked the experts what someone should do if they fail to get the raise they were expecting. Sometimes it can mean you’re underappreciated. However, they say, in their experience a lot of people have an inflated idea of the strength of their year.

One agency president who declined to be attributed notes that employees have to expect some down years from a performance perspective, that not every year can be a home run.

"Some people, especially Millennials, expect every year is going to be amazing for them, but the reality is people don’t grow at the same pace, so you can’t expect the same increase year to year," he says. "It is natural for your performance to have ebbs and flows."

"A disappointing raise is also an opportunity for discussion," he adds. "Employees can ask what can be done to change things in the future and at the very least get expectations in line so everyone understands the parameters and the possibilities." 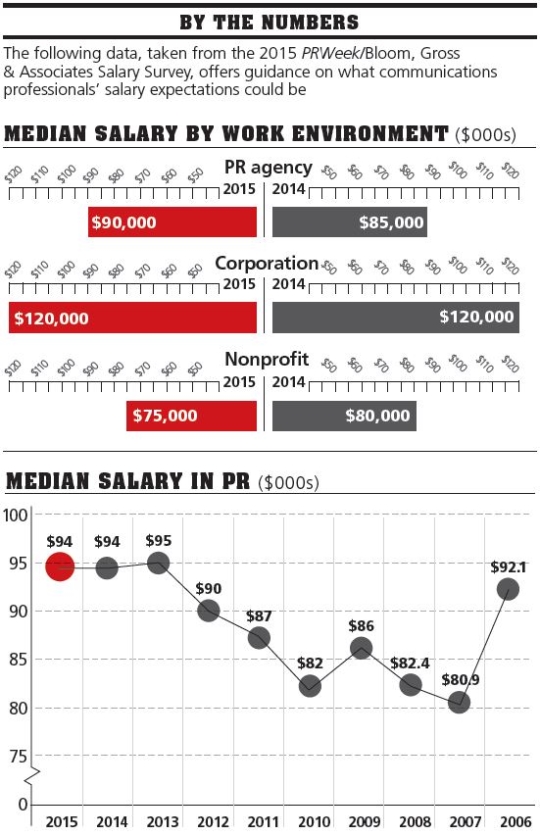 For more information about levels of compensation in PR, such as pay by position, median salary by industry sector and regions, and the gender gap between male and female pay, visit prweek.com/us/salarysurvey