On email or in Lycra, PRs love a comms-savvy CEO
"It appears CEOs in Lycra sell." PRWeek readers would be forgiven for wondering what on earth that sentence meant out of context, but fear not, Flack is here to provide that context. Specifically, this was shy and retiring airline Ryanair trying to drum up some publicity for its new partnership with car hire firm CarTrawler. "Two CEOs in suits announcing a business deal doesn’t usually make for the most interesting photos," the Ryanair press officer told us. Ryanair boss Michael O'Leary (seen here as Robin) and his CarTrawler counterpart snuggled up on a Batmobile for a photo shoot, and stayed in costume (but perhaps not in character) for the press conference after. Column inches and jokes about batting away questions ensued.

Alas, poor Time Out
Embargoes, eh? Don’t you just love 'em. Flack’s colleagues on PRWeek's news desk know all too well how frustrating it is when a rival publication doesn’t play the game. Journos at Time Out obviously feel the same, but took the unusual step of expressing their annoyance publicly. Earlier this week a review section in the printed mag contained a picture of Benedict Cumberbatch in Hamlet but no rating or review. Instead, the article stated that reviews had been embargoed until that evening, adding that, unlike ‘other’ publications, Time Out respects embargoes. In the review itself, Andrzej Lukowski let his frustration been known, making reference to a minor character from the play know for his ignorance: "Having boringly adhered to all press embargoes, I feel later to the party than Fortinbras wading in with my opinion now." Ye gods!

A case of intrigue in the CIPR library
There's something wonderfully euphemistic about the phrase 'unforeseen circumstances'. As an avid checker of the CIPR's website, Flack was intrigued to find a news item on the body's website entitled 'Library closure Wednesday 26 August', which read, in full: "Due to unforeseen circumstances the Member Library will be closed on Wednesday 26 August. Apologies for any inconvenience caused." Flack is hereby calling for the CIPR to come clean and #EndTheLibraryMystery now.

Ingham to CIPR counterpart: 'Good luck with not dying'
Flack certainly hopes that that mystery has nothing to do with CIPR CEO Alastair McCapra's recent exertions. "Potentially one of my last tweets as tmrrow I jump off this mountain attached to a paraglider," McCapra penned (digited, even?) last week. His counterpart at the PRCA, Francis Ingham, who in his tenure had seen three CIPR bosses come and go before McCapra, was quick to respond. "Good luck – don't want *fifth* opposite number at CIPR. The getting-to-know-you lunch bills are crippling!" he tweeted. Charming.

A hundred grand statement
Charity news now, and Flack was impressed by news that public affairs agency PLMR has generated more than £100,000 for charities in the UK and abroad in the nine years since it was founded. The company donates five per cent of its net profits to charitable causes each year and beneficiaries in 2015 have included the Asker Camp in Sierra Leone and Elizabeth’s Legacy of Hope.

Glover is Michelin tyred
Staying with charity news, and helmets off to Bellenden CEO Mark Glover, who recently completed his 300-mile cycle from London to Paris, raising over £2,500 for the British Heart Foundation in the process. The journey took him four days before he arrived at the finish point – the Louvre – where a well-earned drink was waiting. Judging by this picture, he wasn’t too exhausted to engage in a bit of bike lifting either. What a guy. 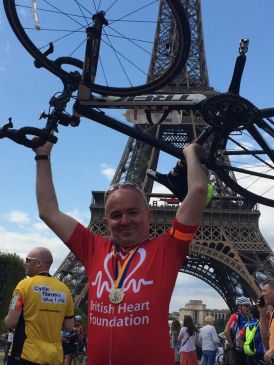