To accompany the PR stunt, Burger King has created the website McWhopper.com with details of how the burger – a mixture of its Whopper and McDonald’s Big Mac – could "get the world talking about Peace Day".

The United Nations recognises 21 September as the International Day of Peace, supported by NGO Peace One Day, and Burger King has proposed that on that day it would serve the McWhopper in a pop-up restaurant in Atlanta, Georgia, halfway between the brands’ respective headquarters in Chicago and Miami.

"Naturally, we’ll only proceed if you’re on board, so we created this site to help you better understand our proposal and realise the potential," the website says.

Fernando Machado, senior vice-president for global brand management at Burger King Corporation, said: "Our proposal is designed to generate the most attention and awareness possible for Peace Day.

"It would be amazing if McDonald’s agrees to do this. Let’s make history and generate a lot of noise around Peace Day. If they say no, we’ll hopefully have, at the very least, raised much-needed financial support and consciousness for the great cause that is Peace One Day. And both are well worth the effort."

Jeremy Gilley, the Peace One Day founder, said: "This proposal from Burger King is the corporate sector at its best – coming together, putting their differences aside and saying: ‘come on; let’s do something to manifest a more peaceful, sustainable world’."

McDonald’s global CEO Steve Easterbrook replied in an open letter posted on Facebook, saying: "We love the intention but think our two brands could do something bigger to make a difference."

Easterbrook’s letter also said that it was wrong to compare war with the PR battle between McDonald’s and Burger King, saying: "Let's acknowledge that between us there is simply a friendly business competition and certainly not the unequalled circumstances of the real pain and suffering of war."

He ended it by saying: "P.S. A simple phone call will do next time." 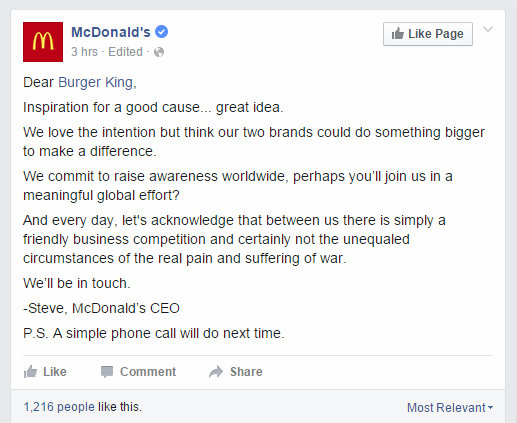