When you founded the Museum of Sex in 2002, what did you want people to get out of it?
My focus and philosophy for the museum has never changed. People have a natural interest in sexuality. This subject is so broad and interesting; it can be used to enlighten art, history, culture, philosophy, and science. That is what I hoped people would find exciting.

Describe your typical visitor.
We started off with 65,000 visitors per year. Last year we had 165,000 visitors, and we’ve had our biggest period of growth this past 12 months, so we should be breaking 230,000 visitors by year’s end.

Are visitors surprised by your museum’s content?
Yes. The typical visitor’s comment is, "the Museum of Sex is not what you think."

Many people don’t know of the prominent people on our advisory board or that we work with respected institutions such as the NewYork Public Library and the New-York Historical Society.

We are not communicating the brand effectively enough so that when people see Museum of Sex, they immediately think of it as a smart, funny institution. That’s not coming across unless someone comes to our site and dives deeper.

Sex can be funny and a punch line. We have nothing against the tawdry or pornographic, but it has to be contextualized for a purpose. We are building awareness that there is this other aspect of sexuality, and it can be challenging. We are fighting an uphill battle.

Prior to the last year, we survived purely on word of mouth about our exhibitions, but now we are in a position to do more substantial marketing.

Is there anything too taboo for your museum?
Our only taboo is something that is not there for any higher purpose. I have two sons and a new stepson, so I am not going to feel comfortable with any kind of display of pedophilia or necrophilia. Even if I didn’t have children, I would be personally offended by that. 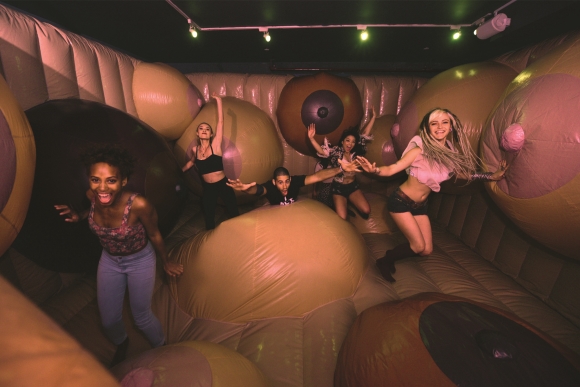 Have your kids been to the museum?
I used to embarrass them, but now my kids, ages 14 and 12, think I’m cool. We have a giant boob bouncy house in our Funland exhibit. So we let them jump around in it. My wife’s 6 year old has the best time jumping in there. We generally advise against kids under the age of 18 coming here, but we are eager to create an exhibit for children.

How would that work?
The exhibit couldn’t be displayed at our museum because of the adult content, but we envision producing and executing it and then sending it to children’s and science museums. The original idea was for age-appropriate paths for parents to guide their children down, dealing with issues such as sexual awareness and identification.