Trigana Air has been heavily criticised for its safety record by aviation experts and on social media after one of its planes crashed in Papua, Indonesia, on Sunday.

It was flying between Jayapura’s Sentani airport and Oksibil, the capital of Papua province, with 54 passengers and crew on board.

The ATR 42-300 twin turboprop lost contact with the airport nine minutes before it was scheduled to land.

It has since been reported Trigana has had 14 serious incidents since 1991, according to the Aviation Safety Network’s online database.

It is also on a list of banned carriers drawn up by the European Union and has written-off 10 aircraft since it was formed in 1991. The average age of its 14 planes is over 26 years.

Indonesia has a weak air-safety record and flying conditions are frequently affected by poor weather and hazardous terrain.

Much of Papua is covered with impenetrable jungles and mountains. Some planes that have crashed there in the past have never been found.

Nevertheless, the airline's safety record has been heavily criticized.

Air strategy consultant George Hatcher Sr tweeted: "Trigana Air Service is on the List of airlines banned in the EU. Apparently they should be banned in their own country too."

Social-media users in Indonesia and beyond also questioned why the airline was allowed to operate when it had such a poor safety record.

Meanwhile, Mary Schiavo, a former US Department of Transportation inspector-general and aviation analyst told 3News in New Zealand: "It has had to write-off 10 aircraft, that is not have a very good record for a very small airline."

Despite the criticism, Trigana had said very little by late morning Monday, almost 24-hours after the plane went down. Its Air Operations Director, Beni Sumaryanto, was quoted by news agencies on Sunday afternoon, shortly after the news broke, when he told reporters the airline had sent another plane to scour the flight path but it had found nothing because of bad weather.

Since then, all of the communications have come from the Indonesia transport ministry and the national search and rescue agency. Airline manufacturer ATR, a partnership between Alenia Aermacchi and Airbus Group, said in a statement: "ATR acknowledges the reported loss of contact of flight TGN267 Trigana Air Service and is standing by to support the relevant aviation authorities."

In addition to saying little to the media, the airline had made no reference to the crash on its website, or social-media channels by lunchtime Monday. 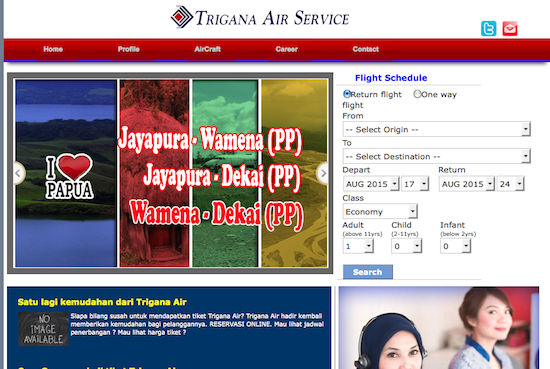 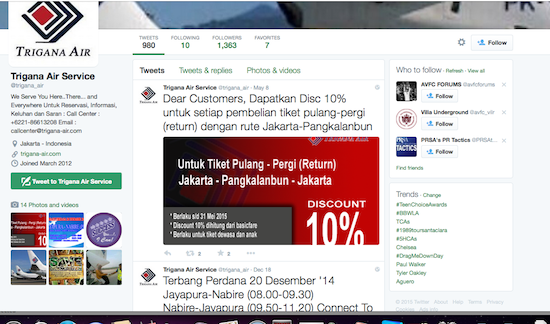 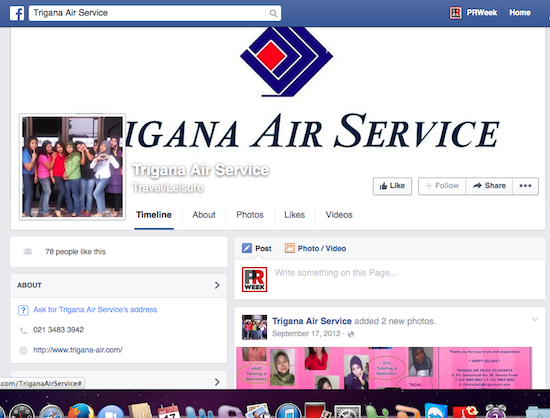