Only 33 percent of respondents in China to a Ketchum's survey believe company leaders communicate effectively, according to the agency's fourth annual leadership study.

As with all previous years of the Ketchum Leadership Communication Monitor, the research finds open and transparent communication to be critical to effective leadership. For the fourth year in a row, open and transparent communication is a top-ranking attribute globally (68 percent) and within China (67 percent). Yet, only 24 percent globally and 33 percent in China feel leaders communicate effectively, with a 44-point and 34-point gap between expectation and delivery.

"It has become apparent over the last few years of this study that effective communication is a necessity for today’s leaders, and that is a sentiment that doesn’t look like it’s going to change any time soon," said Bruce Shu, managing director, Ketchum Greater China. "China’s more positive perception of its leaders is not an insight we take lightly. The connections between leadership, communications and sales demonstrate that leadership and reputation should be both protected and cultivated." 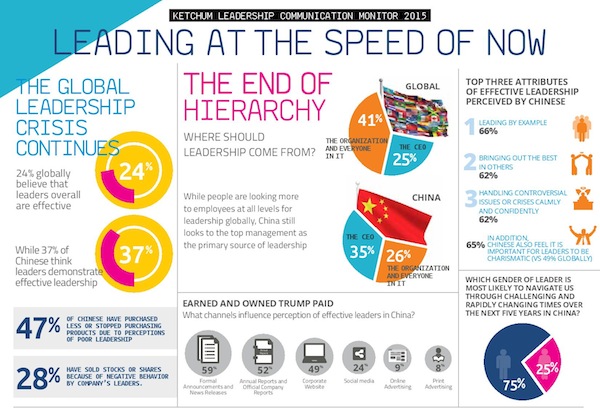 Because of its higher than average belief in the effectiveness of its business leaders, China still looks mainly to the top level for leadership (74 percent), with 35 percent of Chinese respondents believing that leadership should be provided by the CEO only. Only 26 percent believe that leadership should come from the company overall, compared to 41 percent globally.

The survey also identified the top three traditional attributes that Chinese believe an effective leader should possess: leading by example (66 percent), bringing out the best in others (62 percent), and handling controversial issues or crises calmly and confidently (62 percent). Beyond these, they also feel that it’s important for a great leader to be charismatic (65 percent, much higher than the global average of 49 percent), friendly (63 percent) and intelligent (63 percent). Another interesting finding is that 46 percent of Chinese respondents believe it is very important for a leader to be an extrovert, which is above the global average of 36 percent.