When Vice President Al Gore debated Governor George W. Bush at the University of Massachusetts 15 years ago, campaign volunteers would run furiously into the press filing center and hand reporters pieces of paper rebutting the latest rhetorical salvo. That is how campaigns communicated with the press in real-time then. Those days are long gone.

Today, presidential campaigns know they need to be armed with a sophisticated social media strategy in order to communicate effectively. Twitter is where public opinion and pundit opinion is formed in the moment. Their opinions get baked fully by the end of the debate, which we saw happen in 2012 after each of the debates between President Barack Obama and Mitt Romney.

Since then, the influence of Twitter has grown. The number of monthly active users on Twitter has increased by more than 100 million in the last two and a half years, from more than 200 million in December 2012 to 316 million today.

During last Thursday’s debate, most of the Republican presidential campaigns demonstrated they take social media engagement seriously. Based on an analysis of the conversation on Twitter conducted by Burson-Marsteller using StudioB, the campaigns aggressively battled online to shape views about their candidates.

Here are three quick takeaways about the digital landscape of the debate.

Campaigns need to engage during the debate – not before or after.
On the day of the debate, the conversation coalesced around #GOPDebate for commentary. That day, there were 1,941,408 mentions of #GOPDebate on Twitter, according to an analysis conducted with Radian6. The graph below charts how traffic of tweets using #GOPDebate sharply increased in the 8 pm hour before the debate and spiked dramatically during the 9 pm-11 pm period of the debate. 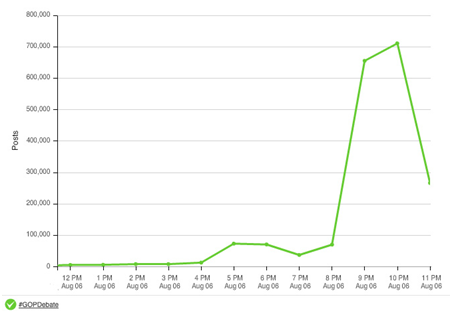 Campaigns cannot afford to sit back as voters and reporters react and comment. As Adam Sharp, head of news, government, and elections at Twitter recently commented, "Campaigns no longer have the luxury of waiting until people get to the water cooler the next morning." Political campaigns – and any organization in the midst of their own effort to influence opinion, for that matter – must participate in the virtual public square.

Except for Donald Trump, whose Twitter account was dormant during the debate, the nine other campaigns pushed content to varying degrees during the two-hour program. Marco Rubio and Ben Carson were the least active on Twitter.

A best practice for presidential aspirants — use hashtags to differentiate content.
While #GOPDebate helped direct the overall conversation around the debate, most candidates also used their own hashtags to focus content for their supporters and journalists, ideally energizing the former and shaping the perception of the latter. Some hashtags amplify a campaign's message, like Donald Trump's #MakeAmericaGreatAgain or Chris Christie's #TellingItLikeItIs.

Others serve as a simple search term to sort conversation, like Scott Walker's #Walker16. Still others seek to instill a sense of camaraderie between a candidate's followers, like Ted Cruz's #CruzCrew or Mike Huckabee's #ImWithHuck. One candidate missed out on the opportunity to direct his supporters to content with a hashtag from his own Twitter account – Marco Rubio.

These hashtags can provide valuable data points for targeting – and the reach of each campaign's hashtag can give insight into how organized a candidate's Twitter followers are, and whether they know what affiliated terms to include in tweets. Campaigns also make decisions on how much paid advertising to invest behind certain tweets with hashtags, which can increase impressions. So in addition to organic reach, these numbers can reflect the priorities a campaign places on Twitter financially.

TV networks, moderators, and reporters shape opinion of what happens during debates on Twitter, too.
Because the debate happened on Fox News, its channels were especially active on the day of the debate. The @FoxNews account also posted tweets, like this one, that were among the most retweeted debate-related posts on Thursday. The Burson-Marsteller team analyzed tweets from 15 Twitter accounts affiliated with Fox on the day of the debate. We chose two flagship accounts (@FoxNews & @foxnewspolitics). We also chose accounts that actively tweeted about the debate and were on at least one of two Twitter lists created by @FoxNews: The Five list and the Shows & Hosts lists.

These accounts touched on a number of key themes. Trump was the elephant in the room on stage and on Twitter, dominating much of the online conversation by Fox-owned platforms. Despite being in the 5 pm debate slot, Carly Fiorina was one of the top candidate names discussed by this Fox group.

This word cloud helps us understand which candidates and topics received the most attention from Fox during and around the debate. We removed the terms #GOPDebate and "debate," which appeared in nearly all of the tweets, for clarity.

Twitter will continue to be a vital communications tool during the course of this presidential campaign. It is both an indicator of sentiment and part of the fabric of political reporting. These takeaways can be applied to any communications campaign – not just in the political context. Our team will continue to look for insights about the debate process and other moments on the campaign trail. We are at the very beginning of a long campaign season. 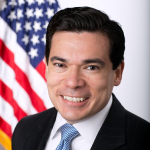 Dag Vega is MD at Burson-Marsteller. Previously, he was special assistant to the president and director of broadcast media at the White House. His experience in political communications includes positions at the Democratic National Committee, the John Kerry for President campaign, and Vice President Al Gore’s presidential bid.